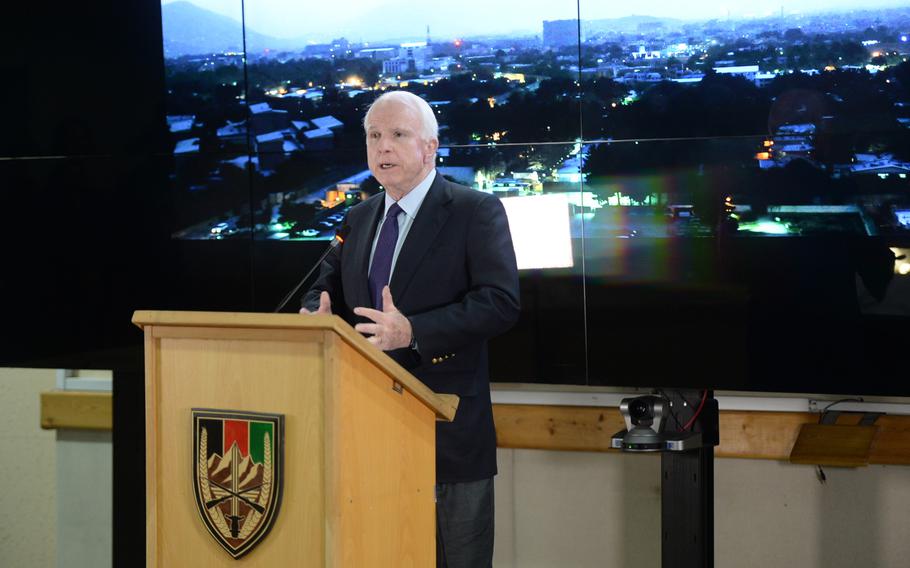 Buy Photo
Sen. John McCain, R-Ariz., fields questions from reporters during a July 4, 2015 press conference at NATO headquarters in Kabul, Afghanistan. McCain said that the Obama administration must reassess plans to withdrawal U.S. forces from the country in 2016. (Carlo Munoz/Stars and Stripes )

KABUL, Afghanistan — The rash of violence in Kabul and northern provinces of Afghanistan is proof the White House must reconsider plans to withdraw all American forces from the country by 2016, Sen. John McCain said Saturday.

A brazen Taliban daytime attack on the Afghan parliament building last week, followed by a suicide attack against U.S. and allied forces a few hundred yards from the U.S. Embassy in Kabul, “demands a reassessment” of the White House’s plan, the Arizona Republican said during a visit to Kabul to commemorate the July 4th holiday.

McCain met with Gen. John Campbell, head of all U.S. forces in Afghanistan, as well as President Ashraf Ghani and Chief Executive Abdullah Abdullah during his visit.

“The Taliban have proven they are not defeated” and the country’s security forces are “simply not achieving” the battlefield gains necessary to allow for the planned U.S. troop withdrawal, McCain told reporters at NATO headquarters.

About 13,000 NATO troops — mainly Americans — remain in country after the official end of combat operations last December. Those troops have been primarily tasked with advising Afghan forces and protecting the shrinking number of coalition bases in Afghanistan.

Almost all U.S. forces are scheduled to leave Afghanistan by 2016, according to the administration’s plan.

McCain, who chairs the Senate Armed Services Committee, lambasted that time line, saying any “date-driven” plan for American and allied troops to leave Afghanistan will “open a door to the Taliban to have great success” in the country.

The influx of foreign fighters into Afghanistan during this fighting season, along with the growing influence of the Islamic State in the country, makes the current withdrawal plan even riskier, McCain said.

Campbell is expected to provide the White House and Congress with an update on the situation sometime this fall.

NATO Secretary-General Jens Stoltenberg announced in May that the alliance would keep a military presence in Afghanistan beyond 2016, though he said troop numbers had yet to be determined.

The Taliban have repeatedly shown an ability to launch large-scale surprise attacks against remote or lightly defended areas across the country since their summer offensive began in April. But their lightly armed fighters have not been able to hold ground in the face of counterattacks by government troops.

The parliament attack and suicide bombing of a U.S. military convoy also show the group’s ability to execute high-profile strikes inside Kabul and the relatively secure capital region.