McCain: Serving in the military, being in 'harm’s way' part of family profession 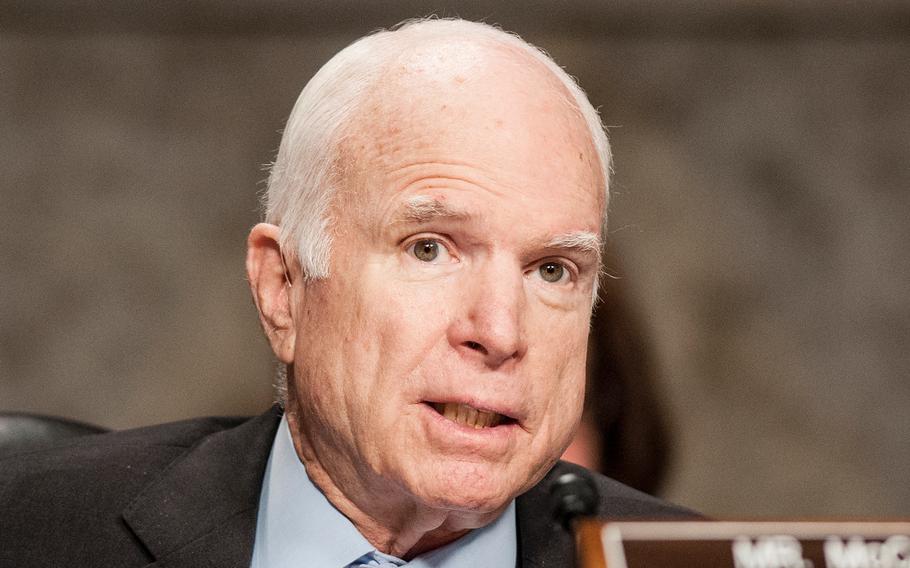 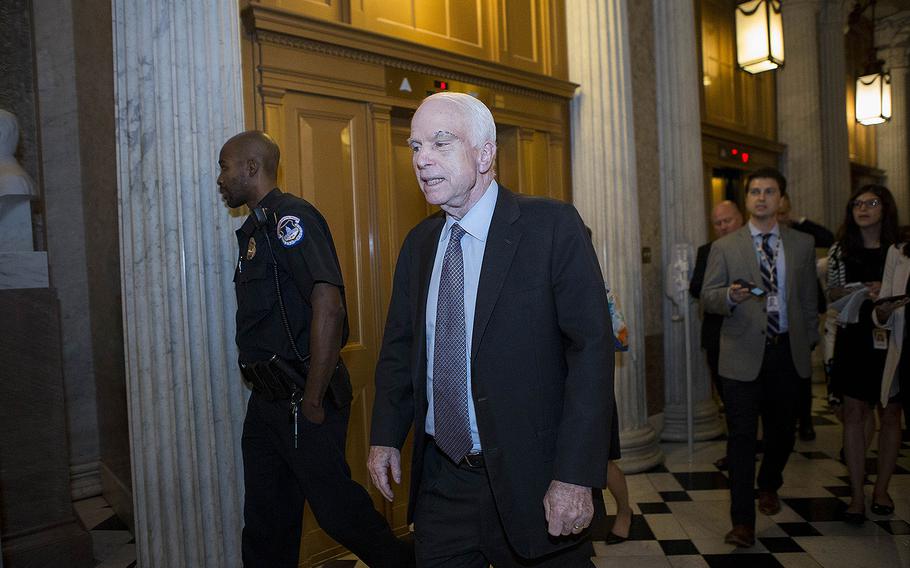 Sen. John McCain, R-Ariz., walks to the Senate chamber on July 28, 2017, prior to voting on a bill that would have repealed the Affordable Care Act. Filming for the upcoming HBO documentary, “John McCain: For Whom the Bell Tolls,” began the same month, shortly after he was diagnosed with glioblastoma, an aggressive form of brain cancer. (Alex Edelman/Zuma Press/TNS)

WASHINGTON — When Adm. John Sidney “Jack” Jr. commanded U.S. forces in the Pacific, he would visit troops in Korea every Christmas, stare across the Demilitarized Zone and ponder the fate of his son and namesake held prisoner by the communists in Vietnam.

“My dad never talked about John, especially ever asked anybody to do anything for him,” the admiral’s younger son, Joe McCain, said in the upcoming HBO film “John McCain: For Whom the Bell Tolls.”

But “every year he was commander in chief on Christmas, he would helicopter to the DMZ… and he would just look across that border trying to somehow feel John or send a message to him,” Joe McCain said.

The story illustrates the sacrifice of servicemembers’ families in time of war and is among many anecdotes told by family, friends and frenemies in a 108-minute documentary on the life of Sen. John McCain, who spent 5 1/2 years as a prisoner of war. The documentary, produced and directed by Peter Kunhardt, began filming shortly after the Arizona Republican was diagnosed with glioblastoma, an aggressive form of brain cancer.

The film begins shortly after the July diagnosis at McCain’s home off Hidden Valley Road near Sedona, Ariz. McCain recalls his rise as a congressman, his controversies and successes, his two lost presidential bids and passionate fights on Capitol Hill. He also discusses his family’s military tradition and his time as POW.

“It’s hard to describe the military heritage in my family. Yes, my dad was worried about me,” said McCain, the 81-year-old father of seven children and five grandchildren. “But the fact of it is he knew the McCains were doing what McCains were bred to do. And if it takes you into harm’s way, that was our profession.”

The gathering was a powerful, emotional tribute to the senator who is in his tenth month in his fight with cancer. McCain left Washington for his home in December and missed Thursday’s premiere, where a bipartisan coalition of lawmakers lauded his legacy, including Senate Majority Leader Mitch McConnell, R-Ky., and House Minority Leader Nancy Pelosi, D-Calif.

“All of you are here understanding the good, the bad and the brilliance of John McCain. The movie … tells the story warts and all,” longtime friend Sen. Lindsey Graham, R-S.C., told the crowd ahead of the viewing. “I feel very lucky to be in his shadow, to be in his friend.”

The film recounts the news of McCain’s brain diagnosis being shared with his family and friends and his fierce determination to keep working. It also follows a series of new admissions also revealed in his new book released this month, “The Restless Wave,” where he admits errors, such as choosing then-Alaska Gov. Sarah Palin as his running mate in the 2008 election over his friend, former Sen. Joe Lieberman, a Democrat and later an Independent from Connecticut.

“The best cure for losing is to get to work,” McCain said of a lost presidential bid. “Get busy.”

Following a surgery to remove a blood clot above his left eye, he was warned an Arizona flight back to Washington in July to vote against the repeal of a national healthcare program would risk his life.

McCain went anyway, against his family’s wishes and telling his daughter Meghan McCain that it was his life, his choice.

As it turns out, work has largely sustained him these past few months, said Meghan McCain, a co-host for ABC’s “The View.”

“We sort of collectively made the decision that if he doesn’t work, he would probably get sick faster because work feeds him,” she said in the film. “And it’s so much of who he is.”

The film also relives many of McCain’s battles, as recounted by a long list of political opponents that includes several U.S. presidents. Among them, former Presidents Bill Clinton, George W. Bush and Barack Obama make appearances in the film.

Obama said McCain showed his character during the 2008 election when he defended his political opponent against a woman’s claim that Obama was Arab and couldn’t be trusted. McCain rejected the comment, saying Obama was a family man with whom he disagreed.

To make that statement in the middle of a difficult campaign, “I thought was an indication of who John fundamentally was,” Obama said. “He could have not been more gracious.”

There is no direct mention of President Donald Trump during the film, as he and McCain have feuded openly, even in the months after McCain’s cancer diagnosis. However, the film does conclude with a McCain speech railing against “half-baked, spurious nationalism.”

His lifelong mission to serve his country through the military and as senator continues even now as he battles an incurable disease, friends and family said.

“John, throughout his life, has been heroic. If he showed us how to live,” said Grant Woods, a former McCain chief of staff. “He’s also showing us how to die.”