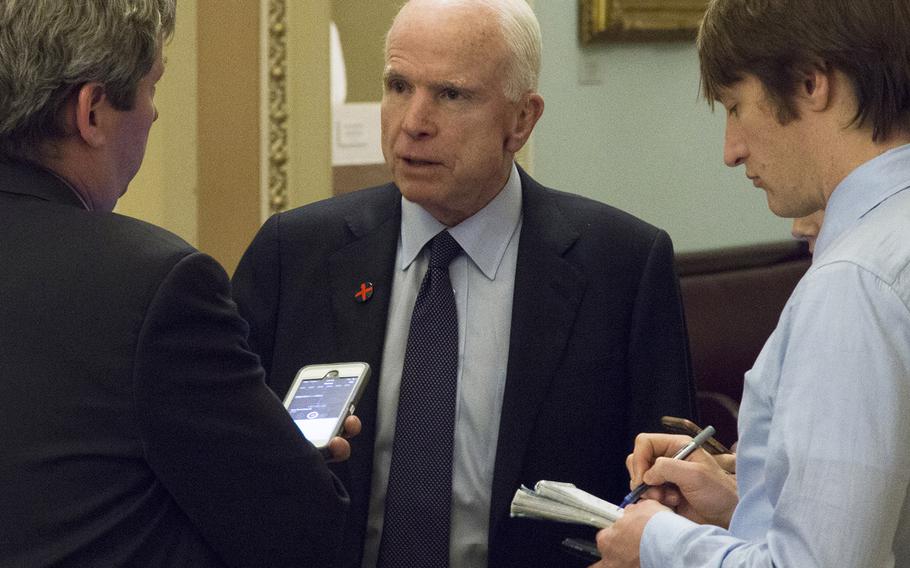 The chairman of the Armed Services Committee and other lawmakers in both parties decried the missile deployment as the newest proof Russia is violating a Cold War-era treaty brokered by then-President Ronald Reagan.

Meanwhile, the Defense Department also confirmed Russian fighters and surveillance aircraft flew close to a U.S. destroyer in the Black Sea – a first under the Trump administration -- and a Russian surveillance ship has parked in international waters off the east coast of the United States.

“They are testing this president, just as I predicted,” McCain said Wednesday.

The incidents come as the Trump administration is reeling from the resignation Monday of National Security Adviser Mike Flynn over his communications with Russian officials and growing questions over its relationship with Russia.

Trump has pressed for a closer relationship with Russian President Vladimir Putin. But that position, which breaks with long-held Republican views, is under scrutiny after Flynn’s departure and reports his election campaign was in close communication with the Russians last year.

McCain said the fielding of cruise missiles capable of carrying nuclear warheads is a “significant threat” to the U.S. forces stationed in Europe and ally members of NATO. He called for an immediate response to shore up protections there.

The administration of President Barack Obama charged Russia with violating the 1987 Intermediate-Range Nuclear Forces Treaty by developing the weapons. The deployment is the latest dispute with Moscow over the arms.

Republicans laid blame on Obama for not responding adequately to the growing missile threat. The Russian military has also harassed U.S. warships in the past but the incident involving the USS Porter last week is the first time a ship was buzzed during the Trump administration.

The Russian surveillance ship was loitering about 30 miles from Groton, Conn., where the Navy has a submarine base, according to Fox News.

Now, it is Trump’s turn to determine how to respond.

Rep. Mac Thornberry, R-Texas, the chairman of the House Armed Services Committee, called the deployment of the prohibited cruise missiles disturbing and said it is a signal to the president for stronger action.

“Our military has warned publicly that such a violation poses a military risk to the United States, our allies, and our deployed forces,” Thornberry said in a released statement. “There are clearly lessons here for the Trump administration about the price of not confronting aggression which puts international security at risk.”

The Cold War treaty and its prohibition on the short-range, ground-launched nuclear missiles is “the backbone” of the Reagan’s strategy to deal with the Russians, said Sen. Jack Reed, D-R.I., the top Democrat on the Armed Services Committee.

“This is not a new threat, but it is a serious concern that should serve as a wakeup call to the Trump administration’s dealings with Russia as of late,” Reed said in a released statement.