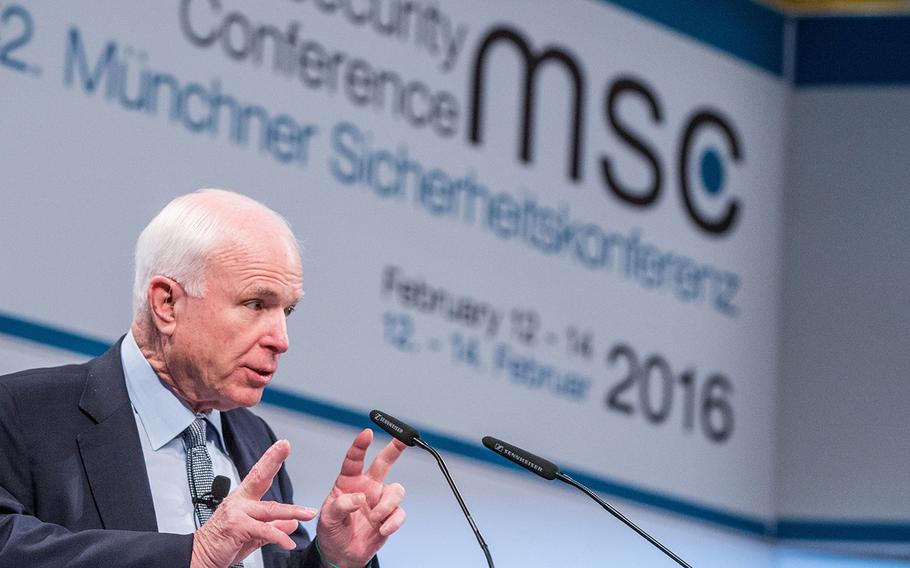 Sen. John McCain at the Security Conference in Munich, Germany, Sunday, Feb. 14, 2016. On Sunday, McCain blasted a deal to seek a pause in fighting in Syria, arguing it plays into a Russian strategy to continue attacks on American-backed rebels.. (Mueller/MSC)

MUNICH — Sen. John McCain on Sunday blasted a deal to seek a pause in fighting in Syria, arguing it plays into a Russian strategy to continue attacks on American-backed rebels.

“I wish I could share the views of some of my friends who see this agreement as a potential breakthrough, but unfortunately I do not,” the Arizona Republican at the conclusion of the three-day, annual Munich Security Conference. “My skepticism rests simply on the nature of our adversaries’ ambitions, and the basic realities of power and commitment in the world today.”

Early Friday, a delegation of 17 nations headed by the U.S. and Russia, reached a deal to work toward a pause in hostilities in Syria within a week to enable the delivery of humanitarian aid into besieged cities. The agreement, however, allows air strikes to continue against terrorist groups operating in the country including the Islamic State group and al-Qaida-affiliated al-Nusra.

The West accuses Russia of also conducting attacks against moderate rebel forces fighting the regime of Bashar al-Assad. Moscow regards those rebel forces as essentially terrorist organizations, and McCain said Russia was likely to continue its attacks on anti-Assad forces.

While the agreement requires opposition groups to stop fighting, it allows the bombing of terrorist targets, which Moscow considers to be “everyone,”’ McCain said.

Last year, Russia launched its intervention in Syria in a push to strengthen Assad, whose regime was under threat after five years of fighting. Moscow sees the Assad government as a prerequisite for stabilizing the country; the West sees Assad as a magnet for terrorists and an obstacle to a political resolution.

At the time, leaders in the West said Russian President Vladimir Putin was headed into a quagmire. Instead, Putin has “stabilized the Assad regime,” which is now on the offensive, McCain said.

German parliamentarian Norbert Roettgen, speaking on a panel with McCain, conceded Russia is now in a position of strength in Syria.

“ I think Russia has gained the upper hand in the region,” Roettgen said. “And this is by historical measures, a novelty.”

Russian use of military force “significantly and fundamentally improved its political and diplomatic position,” he said.

“He (Putin) wants to exacerbate the refugee the crisis and use it as a weapon to divide the trans-Atlantic alliance,” McCain said. “The only thing that has changed about Putin’s ambitions is his appetite is growing with the eating.”