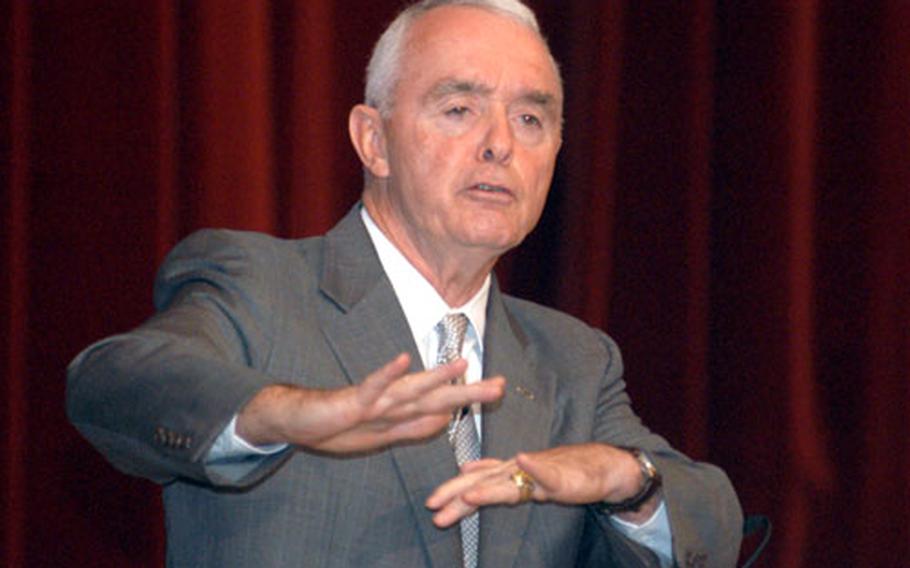 HEIDELBERG, Germany &#8212; Barry McCaffrey fought in two wars &#8212; Vietnam and the Persian Gulf War &#8212; before retiring at the top, the most highly decorated four-star general in the U.S. Army.

He knows, he said, a lot about fighting. He learned it early, but not in military battle, McCaffrey said Friday during a speech to a ballroom full of soldiers. He learned it as an &#8220;untalented but undefeated&#8221; college boxer.

That sort of fear is necessary any time the United States uses its armed forces, he said.

McCaffrey&#8217;s talk, at the U.S. Army Europe&#8217;s Land Combat Expo, was designed to give his assessment of how well the U.S. is confronting the terrorist threat to members of what he calls the second &#8220;pillar&#8221; in the U.S. response to terrorism: military power.

That second pillar, the soldiers, sailors and airmen and Marines, has been doing a lot of the heavy lifting. Taking away al-Qaida sanctuaries in Afghanistan was an important intervention, he said. And although there had been debate about the wisdom of invading Iraq &#8212; and a &#8220;shameful failure of intelligence&#8221; going into the Iraq, &#8220;I thought then and still do that it was the right thing to do,&#8221; McCaffrey said.

McCaffrey has been critical of Pentagon decisions in how to fight the war, long saying there were too few troops, and too little planning, and that the Pentagon had responded to its own missteps not with corrective action but arrogance and denial.

But at Friday&#8217;s speech, he omitted such criticisms, instead lauding the work of the troops in his audience.

McCaffrey said the killed and injured troops from Iraq and Afghanistan number about a battalion a month, but that total is &#8220;reasonably light, from a historical perspective,&#8221; he said.

The first pillar in confronting terrorism is the CIA, FBI and their international counterparts, he said. They are working on &#8220;a global campaign in intelligence communities and law enforcement to create new mechanisms of cooperation.&#8221; That effort is working &#8220;pretty well,&#8221; he said, praising in particular the CIA.

McCaffrey said that the Army, now fighting wars in two countries was the smallest it had been since 1939, and that the U.S. had the smallest percentage of its people serving in the military ever during a time of crisis.

Although the aviation system and nuclear power plants are far better secured than they were, the borders better protected and drug remedies for biological agents stockpiled, the effort, McCaffrey said, was &#8220;under-resourced.&#8221;

It would take another five to 15 years for the Department of Homeland Security to become cohesive, he said, noting in passing the &#8220;dreadful, shameful meltdown&#8221; in Louisiana and Mississippi after hurricane Katrina.

One of the biggest future concerns, he said, is the ability of terrorist groups to use nuclear, chemical or biological weapons. &#8220;If you can make beer, you can make mustard gas,&#8221; he said.

At the same time, he said, efforts to protect Americans must not diminish their freedoms.