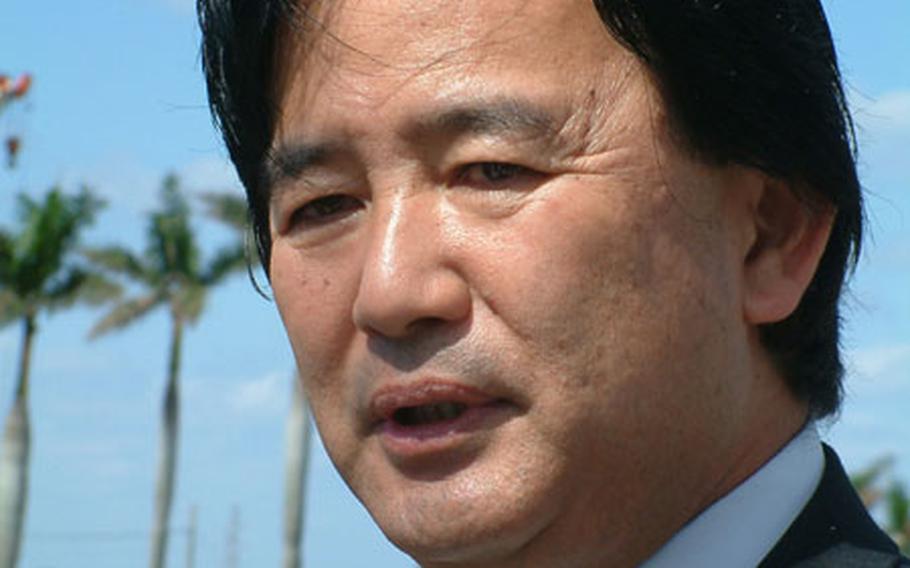 GINOWAN, Okinawa &#8212; Mayor Yoichi Iha has embarked on a campaign to close Futenma Marine Corps Air Station before an alternate airport can be built off northeastern Okinawa.

The mayor of Ginowan, the city that hosts Futenma, says the air station was identified for closure in 1996 by the bilateral Special Action Committee on Okinawa.

The panel set a time limit of seven years to move Marine air operations to an alternate site, Iha said. Although a new location was chosen a few years later, construction has yet to begin.

The time limit is up, Iha said Friday, following a visit to Marine Corps Bases Japan headquarters on Camp Foster.

&#8220;This year marks the seventh year, the year that both U.S. and Japanese governments promised us to close the Futenma air station, yet there is no sign that the promise is realized,&#8221; said Iha, who was elected mayor lastin April on his anti-base platform.

He said the latest estimates put completion of the new airport &#8212; to be built on reclaimed land adjacent to Camp Schwab &#8212; 16 years into the future.

&#8220;President Bush is visiting Japan now,&#8221; Iha told reporters during an impromptu news conference outside Camp Foster&#8217;s main gate following the meeting. &#8220;Taking this opportunity, I am asking him to include Futenma air station in the list of U.S. military installations that the government is reviewing to close down by 2005.&#8221;

He said Futenma station has too much air traffic for a base in a densely developed area.

&#8220;He told me that it was also the wish of Marine Corps to move the air station as soon as possible,&#8221; he said. &#8220;Five to seven years might not be a feasible target, but he said that the Marine Corps shared the wish of the citizens of Ginowan to move elsewhere and return the land.&#8221;

Iha plans to visit Tokyo next week to lobby the national government for closure of Futenma.

And he has plans to take his campaign to Washington, D.C., next year.

&#8220;Our residents are exposed to constant aircraft noise and are suffering,&#8221; he said. &#8220;I want to remind officials of both governments of this reality. This is an issue that cannot be neglected and left unresolved.&#8221;

Iha&#8217;s long-term goal has always been removal of U.S. bases from the island.

The hospital move is an integral part of returning all of the base property on what is now Camp Lester to the original landowners.

The Special Action Committee report identified military property on Okinawa that, once closed, would reduce the U.S. base footprint by 21 percent.

The bases now cover roughly one-fifth of the island.

In order to close Camp Lester, the hospital and Lester Middle School are to be replaced by new facilities at nearby Camp Foster. The hospital is slated to be built in Futenma Housing Area, within Ginowan city limits.

&#8220;Building any permanent structure in that area is unacceptable because the area has to be restored as the former Futenma community when the military land is eventually returned,&#8221; he told Stars and Stripes last summer.

He said the Futenma community was one of the most significant sites in the history of Okinawa.

&#8220;It is the community where successive kings of the Sho Dynasty visited once a year since 1644 to worship at the Futenma Shrine,&#8221; he said.

&#8220;I am sure the American people would understand and respect our desire,&#8221; he said. &#8220;I understand that in the United States religious activities of American Indians are well-protected under the Native American Free Exercise on Religion Act, which was enacted 1993,&#8221; he said.

&#8220;When the military bases were created on Okinawa after World War II, no such considerations were given. But this is not the 1950s,&#8221; he said. &#8220;I expect due consideration to be given to such a historical and religiously significant place,&#8221; he said.