Mayor of Haitian city not eager to see Marines leave 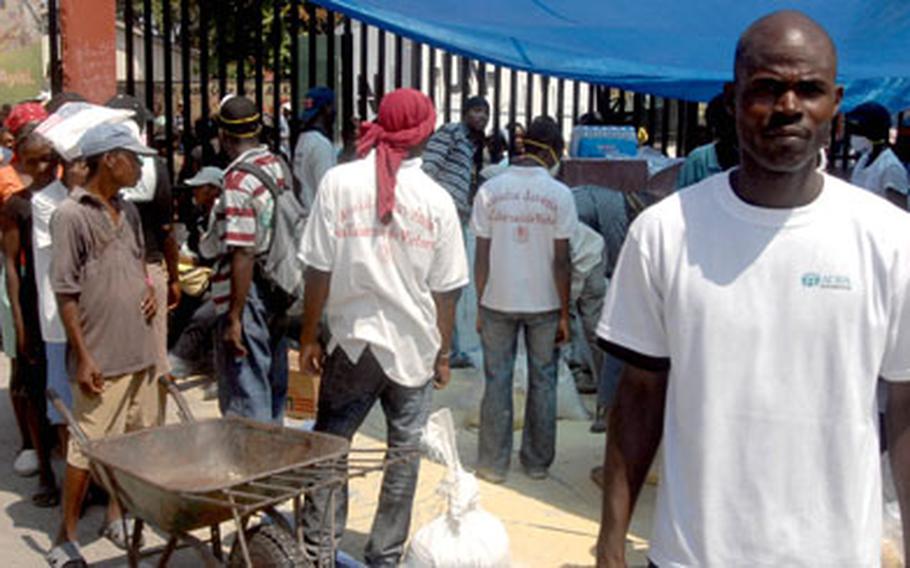 Haitian Coast Guard officer Jean Raynold Bataille, right, one of the community leaders who worked with the Marines in Carrefour, supervised this food distribution point in the city on Wednesday. (Seth Robson / Stripes) 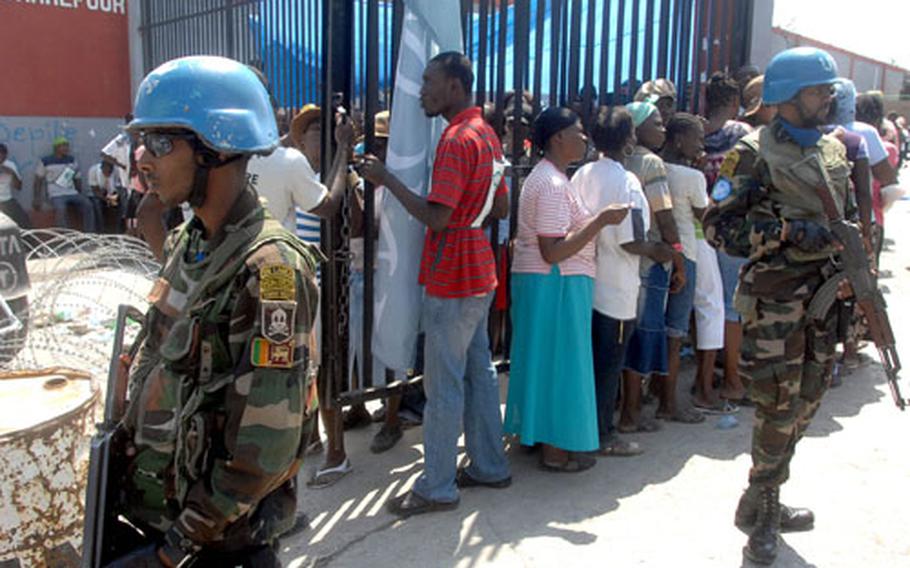 Haitian women wait in line at a food distribution point in the city of Carrefour on Wednesday. (Seth Robson / Stripes)

CARREFOUR, Haiti &#8211; U.S. Marines in Carrefour say they&#8217;ve achieved &#8220;victory&#8221; here by helping local government, aid groups and community leaders set up their own systems for earthquake relief and job creation, but the city&#8217;s mayor is reluctant to see the military presence end.

Fewer than 100 Marines, from 3rd Battalion, 2nd Marine Regiment, are camped on the waterfront at Carrefour providing security for civil affairs missions that range from digging drains and burn pits to stringing wire around the perimeters of camps for displaced Haitians.

Capt. Rebecca Popielski, 32, of Alexandria, Va., a Marine civil affairs officer working in Carrefour, said local politicians and community leaders such as church pastors and orphanage directors were at odds when the Marines arrived in the city last month.

But on Thursday morning, Carrefour Mayor Yvone Jerome sat in a temporary office at the town&#8217;s Coast Guard base while a crowd of hundreds of people, who he said were gathered for a census, pushed against the gates in the hope of gaining entry.

He said he&#8217;s eager for the Marines to continue working in Carrefour.

&#8220;Just their presence here is reassuring,&#8221; he said. &#8220;If the unit that is here has another mission they can go but it would be a great thing if they were replaced by another unit so they can continue the good work.&#8221;

Jerome said he&#8217;s pushing ahead with plans to get people working at jobs like collecting trash, removing rubble and providing security in a city where 60 to 65 percent of people are out of work.

Upon arriving in Carrefour, the Marines developed a plan for aid distribution and met all of the city&#8217;s power brokers to get the various parties to work together. The plan involved dividing the city into eight sectors with 10 outlying districts and assigning a leader, usually a pastor, to handle aid distribution there, Popielski said.

When aid arrives in Carrefour, it&#8217;s sorted in a large gymnasium where the leaders can see that each sector is getting an equal amount, she said.

The system includes checks and balances, oversight by the various groups, and transparency to avoid corruption, she said, adding that overall responsibility for the aid distribution has been handed off to the local government and community leaders.

&#8220;They&#8217;ve done 10 aid distributions so far,&#8221; she said, adding that the network built by the Marines in Carrefour can serve as a platform for creating jobs, running elections or disseminating information.

&#8220;They have the logistics and they have the security, provided by the Haitian police and coast guard,&#8221; she said.

Haitian police provided security alongside Sri Lankan United Nations peacekeepers as thousands of Haitian women queued for food at a food distribution in Carrefour on Wednesday.

The man overseeing the exercise, Haitian Coast Guard officer Jean Raynold Bataille, is one of the community leaders who worked with the Marines. Bataille&#8217;s house has collapsed and his family is living in a tent, but he&#8217;s devoted himself to relief efforts since the earthquake, he said.

A lot of people wanted to help distribute aid in Carrefour after the earthquake but those chosen to oversee the effort were carefully selected, with the help of the Marines, Bataille said.

The community leaders will stop distributing free food at the end of the month. The handouts will be replaced by work programs that will pay locals the money they need to buy food, he said.