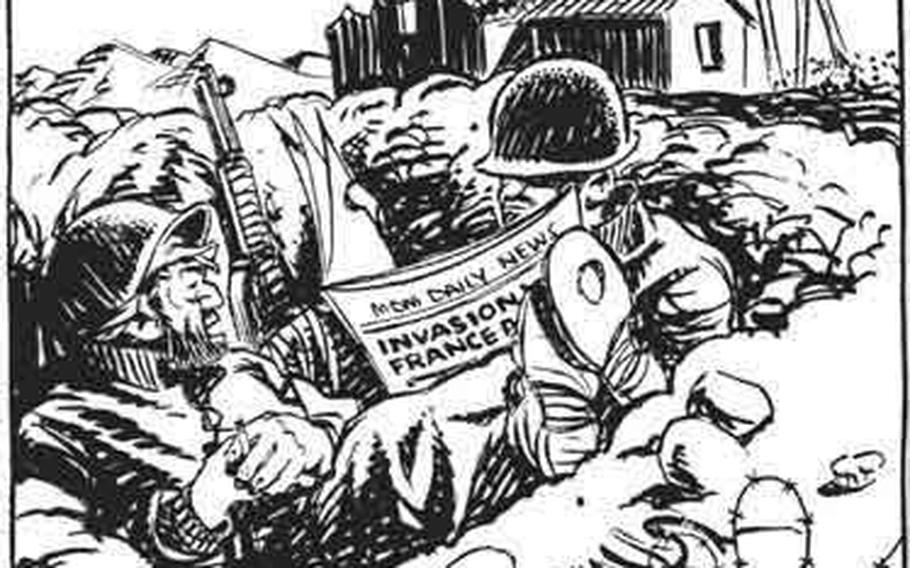 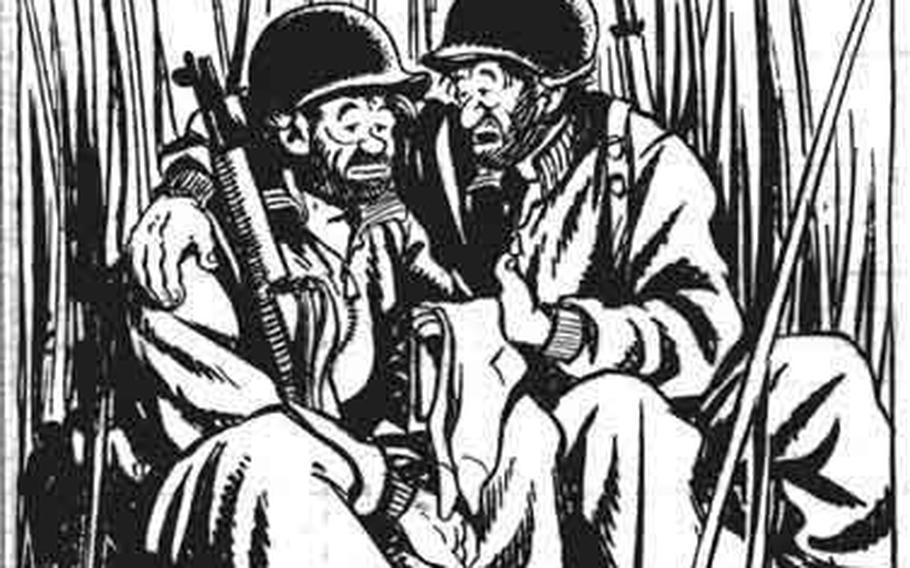 "Joe, yestiddy ya saved my life an' I swore I'd pay ya back. Here's my last pair of dry socks." (Bill Mauldin) 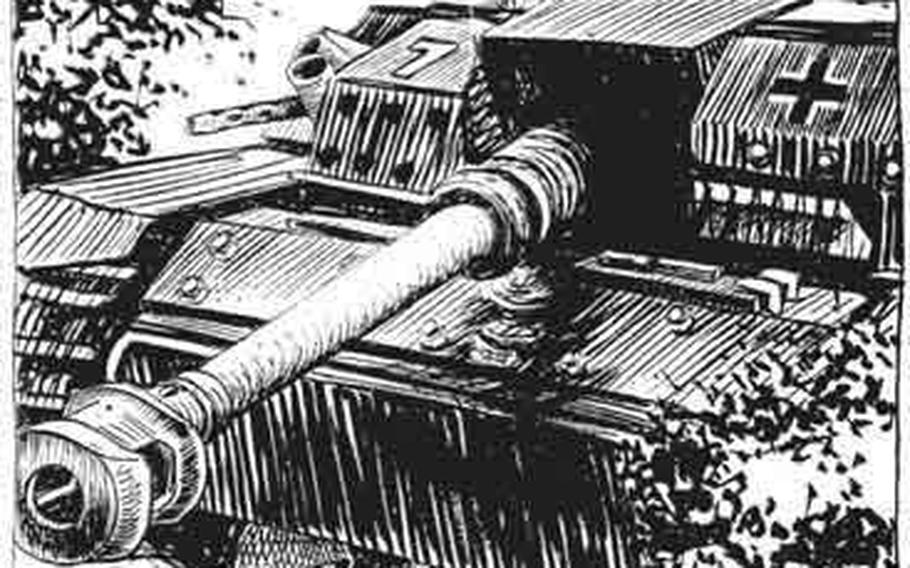 "Able Fox Five to Able Fox. I got a target but ya gotta be patient." (Bill Mauldin) 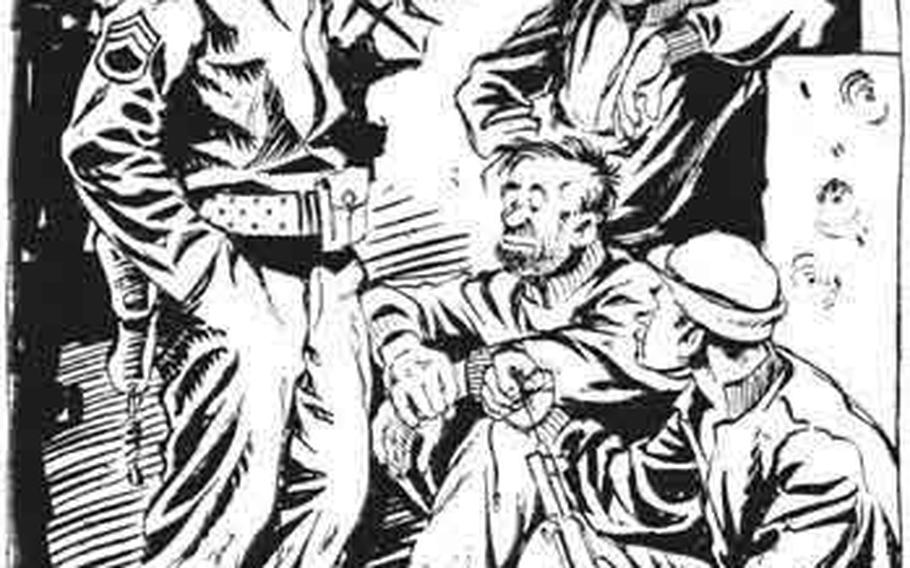 "I need a couple guys what don't owe me no money for a little routine patrol." (Bill Mauldin) 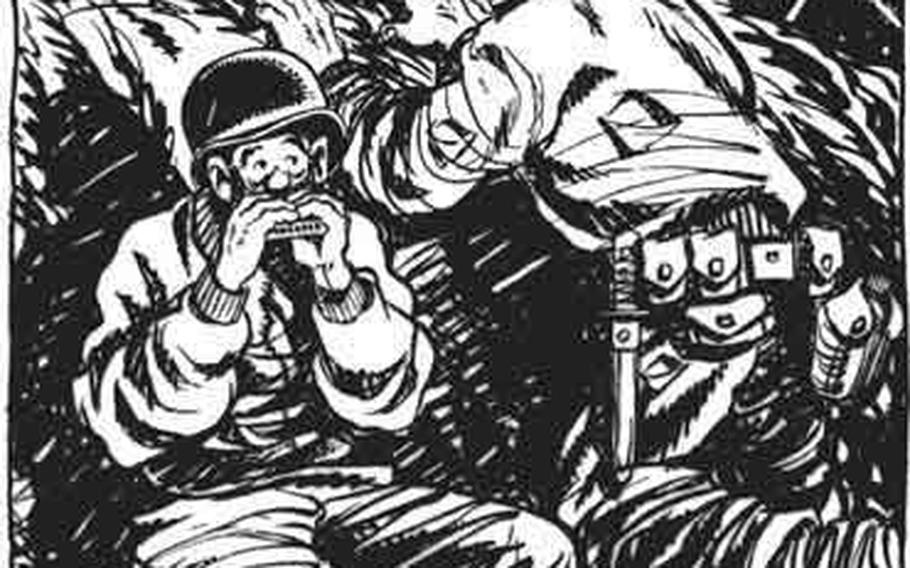 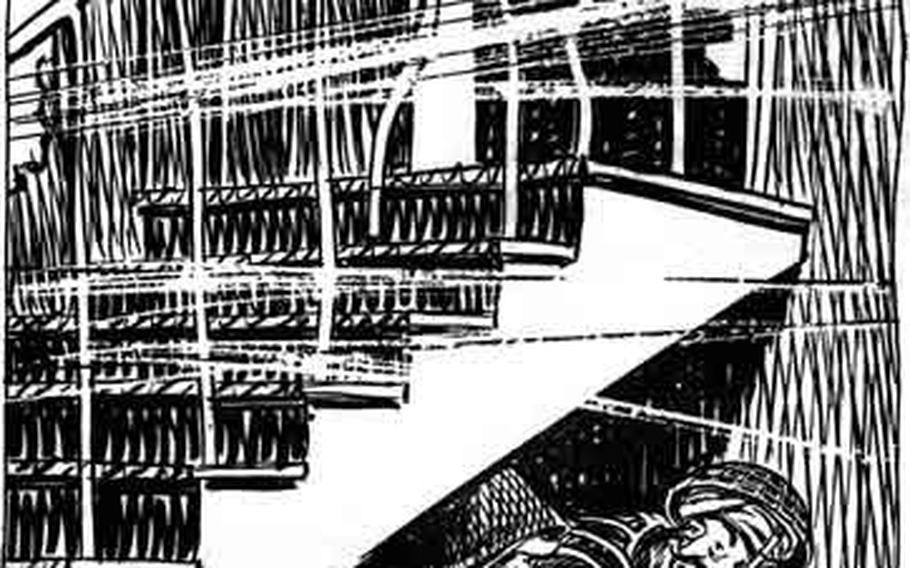 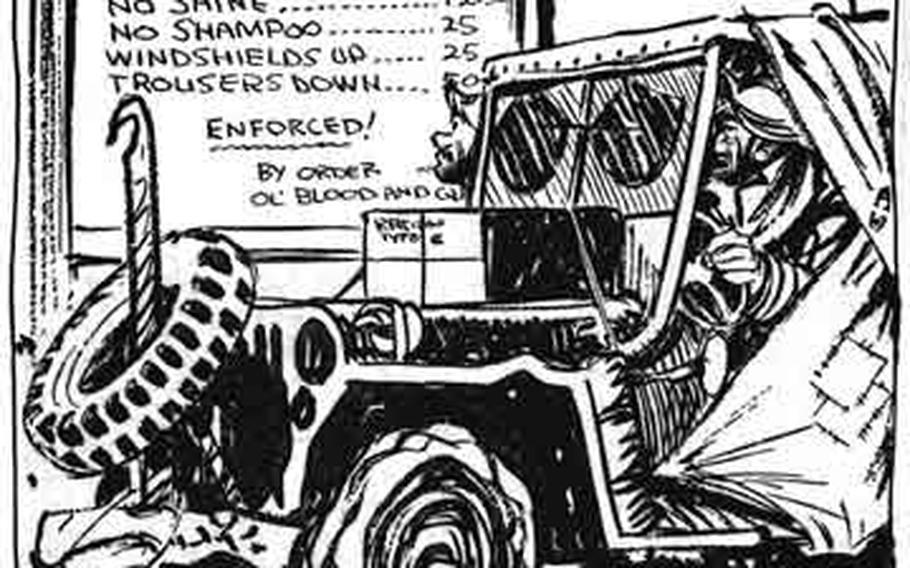 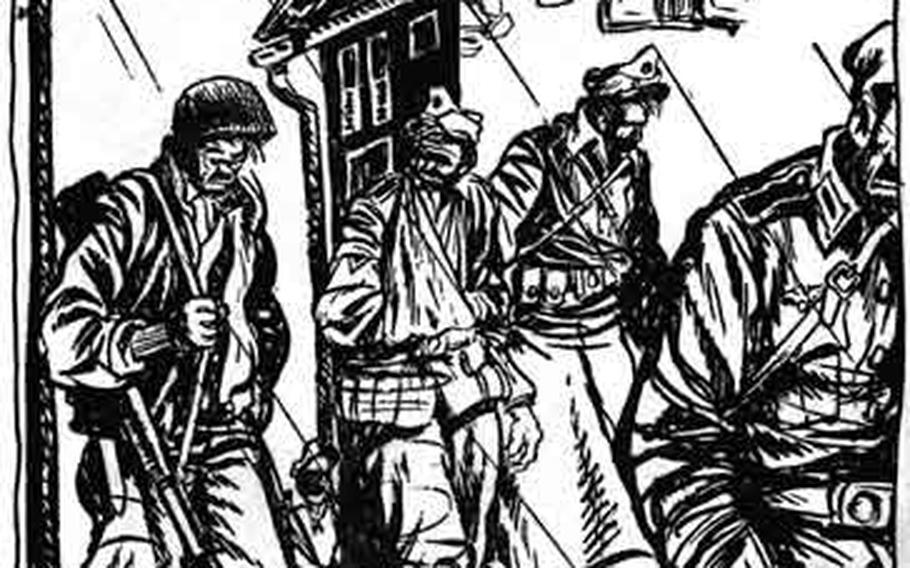 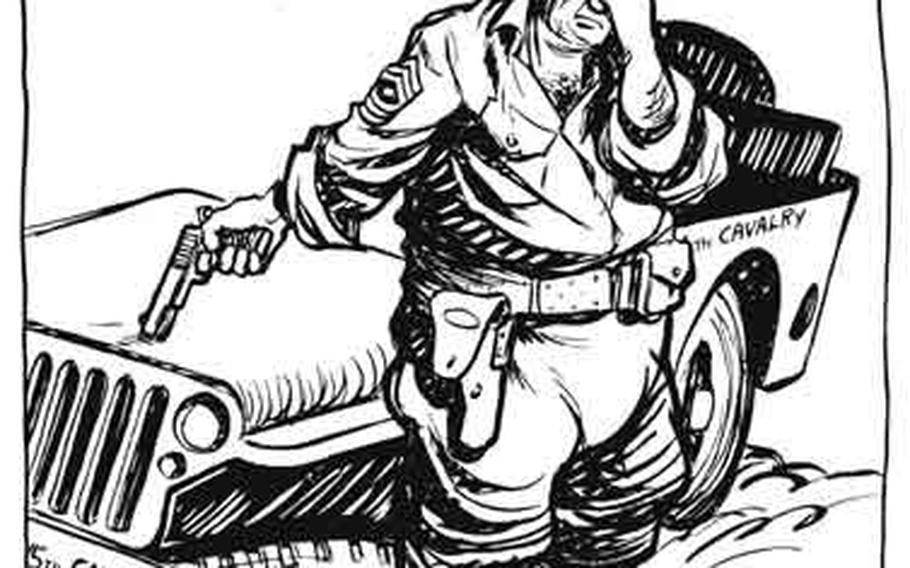 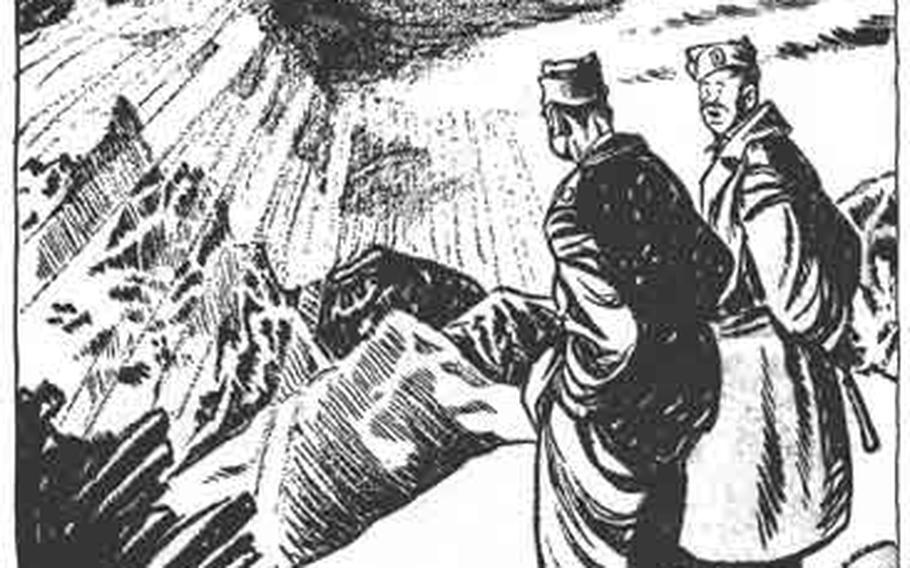 "Beautiful view! Is there one for the enlisted men?" (Bill Mauldin) 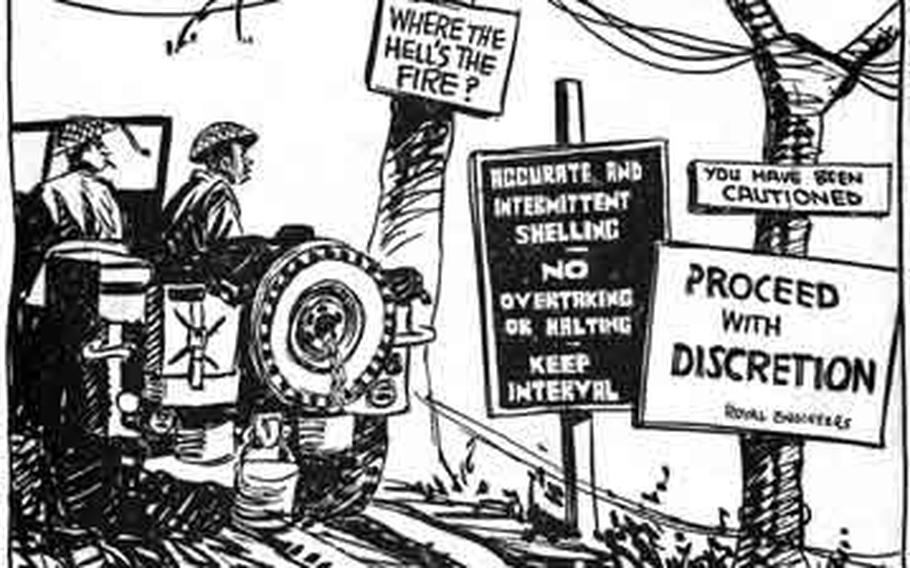 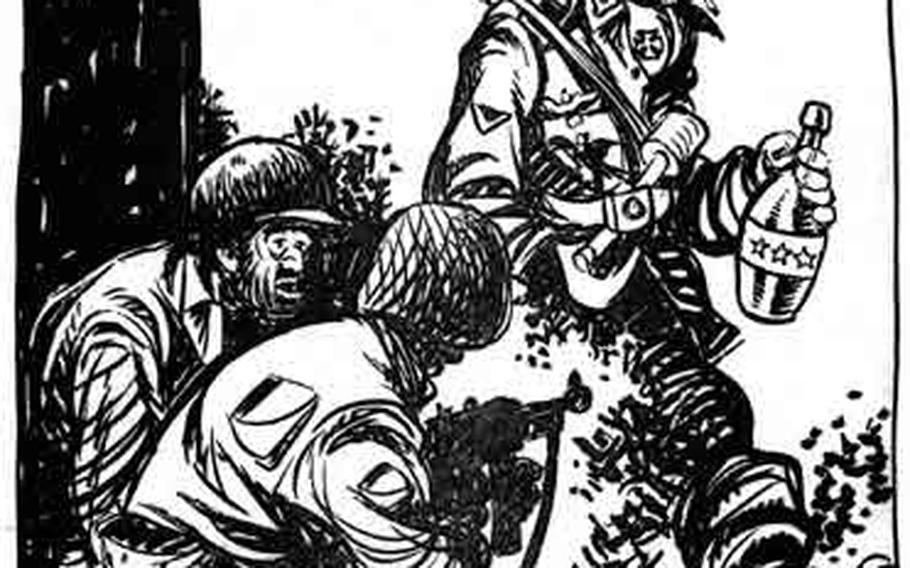 DARMSTADT, Germany — In Bill Mauldin's book of his World War II experiences, Up Front, he makes an admission in the opening line: "My business is drawing, not writing."

In fact, the creator of Willie and Joe, two combat infantrymen slogging through the war who star in the book as they did on the pages of The Stars and Stripes, wrote the book with ease.

"I sat down with about 170 cartoons in front of me and started flipping them over and writing the text, whatever came to mind," said Mauldin, in Germany to celebrate the 50th anniversary of the newspaper.

The result is a book that has endured as the World War II generation has grown old and their children have reached middle age. The book, published in 1945, is a series of anecdotes and vignettes from a man who crossed the battlefields in a jeep to capture in ink the lives of all the Willie and Joes.

Plus, although known for his drawing, Mauldin was not a bad writer.

"It took me about five days or six days because I knew what I wanted to say about each cartoon," the author said. "I've written about 14 books since then and none of them were like falling off a log like that one was."

It nearly wasn't printed. Publishers were reluctant to take on the risk of printing a book about the dogfaces fighting a war, afraid that the general public would not understand and fail to respond at the cash register.

"I was an unknown factor," Mauldin said. "Most of my stuff was known only to the soldier overseas."

A New York agent for Mauldin approached Simon & Schuster Inc., a major publisher of books. Not interested, was the reply.

Holt Publishing took on the task, but not with any great relish, Mauldin recalled.

"They had very little confidence. They printed 5,000 copies the first printing," he said.

The book, which is still in print, has sold 3 million copies. The big winner was World Publishing Co., which had a stockpile of paper, which was difficult to obtain during the war.

"I never found out if anybody had anything to say down at Simon and Schuster," Mauldin said.

Willie and Joe were familiar to all the soldiers reading The Stars and Stripes during the war. Because of Up Front, they have become familiar to millions who have never seen a war and were born decades after the cartoons were drawn.

They are popular because the cartoons were accurate in their depiction of an infantryman's life.

"They were authentic. That was very important to me," said Mauldin, a soldier with the 45th Inf Div during the war. "When I drew an M-l rifle, I knew what one looked like."

He went to great lengths to maintain that authenticity. He once accidentally drew a grenade with the pin on the wrong side. It was impossible to change it, so Mauldin drew the rest of the cartoon backward, signed his name backward and sent orders to the newspaper to reverse the cartoon in the engraving process.

It was a small thing, but to Mauldin, such accuracy resulted in credibility with his most important audience — the combat infantryman of World War II.