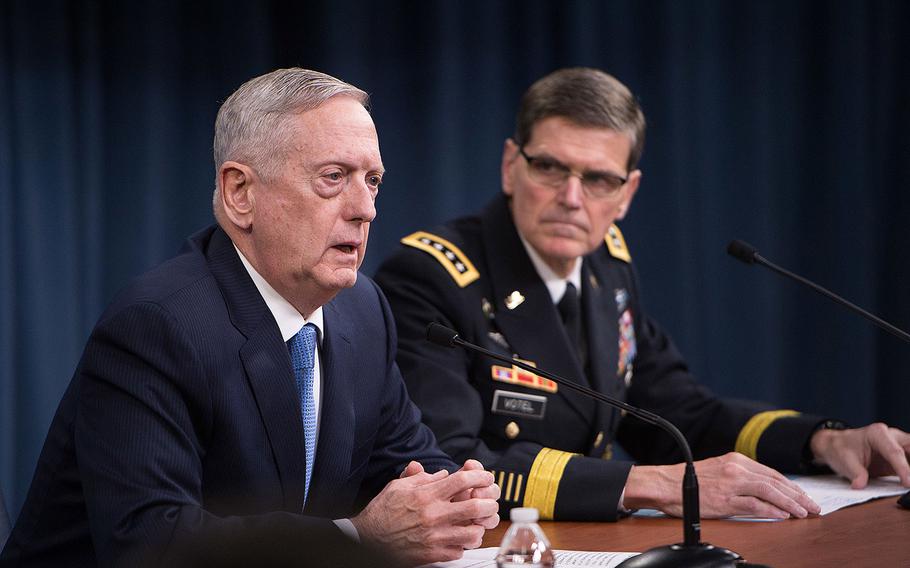 WASHINGTON — The United States has not ruled out more attacks against the Syrian government if it continues to use chemical weapons against its people, Defense Secretary Jim Mattis said Tuesday.

“If they use chemical weapons, they are going to pay a very, very stiff price,” Mattis told reporters at his first Pentagon news briefing since taking office.

Mattis’ warning came hours after White House officials told reporters that there was clear evidence that Syria had dropped the nerve gas sarin last week on civilians in Khan Sheikhoun, a rebel-controlled village in western Syria, killing at least 70 people. The officials also raised the possibility that Russia might have known about the attack in advance.

White House spokesman Sean Spicer said this week that “the sight of people being gassed and blown away by barrel bombs ensures that if we see this kind of action again, we hold open the possibility of future action.”

The U.S. warnings came as officials were trying to determine the extent of Russia’s involvement of the sarin attack. They said Russia was involved in a cover-up of the attack at the very least.

“I think it’s clear the Russians are trying to cover up what happened,” said one senior White House official, who briefed reporters on the condition of anonymity.

The official also said the United States has surveillance footage of chemical experts at the Sharyat Air Base for months prior to the attack and again on the day of the attack. Russian jets also operate out of the western Syria base, which the White House said raises the possibility that Russia was complicit in the attacks.

“How is it possible that their forces were co-located with the Syrian forces that planned, prepared and carried out a chemical weapon attack from the same installation and did not have foreknowledge?” the senior White House official asked.

The official, who was one of three senior White House officials who briefed reporters, said U.S. intelligence, physical evidence from the victims and video footage “makes quite clear that the attack came from a Su-22 fixed wing aircraft out of the Sharyat airfield.” The official also said the wounds on the victims that they have been able to assess show that Syria used sarin in the attack.

“We do have physiological samples from a number of victims that confirms sarin exposure,” the official said.

The chemical attack prompted the United States to strike Sharyat airfield late Thursday with scores of Tomahawk cruise missiles fired from the USS Porter and USS Ross, destroyers positioned in the Mediterranean Sea. Fifty-seven of 59 missiles hit their targets at the airfield and destroyed about 20 fighter aircraft, fuel facilities and radar, Mattis said.