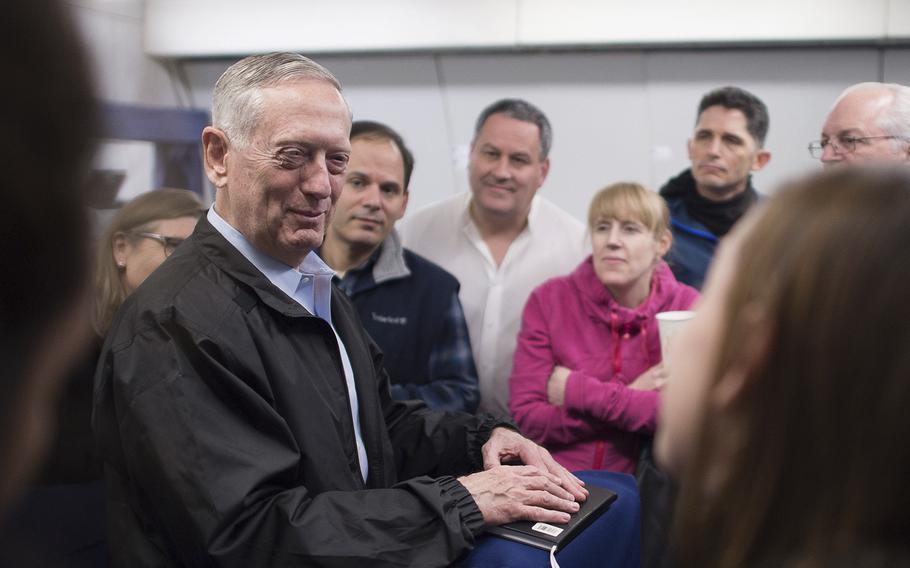 Secretary of Defense Jim Mattis answers questions during a flight to Korea. on Feb. 1, 2017. (Amber I. Smith/U.S. Army)

Secretary of Defense Jim Mattis answers questions during a flight to Korea. on Feb. 1, 2017. (Amber I. Smith/U.S. Army) 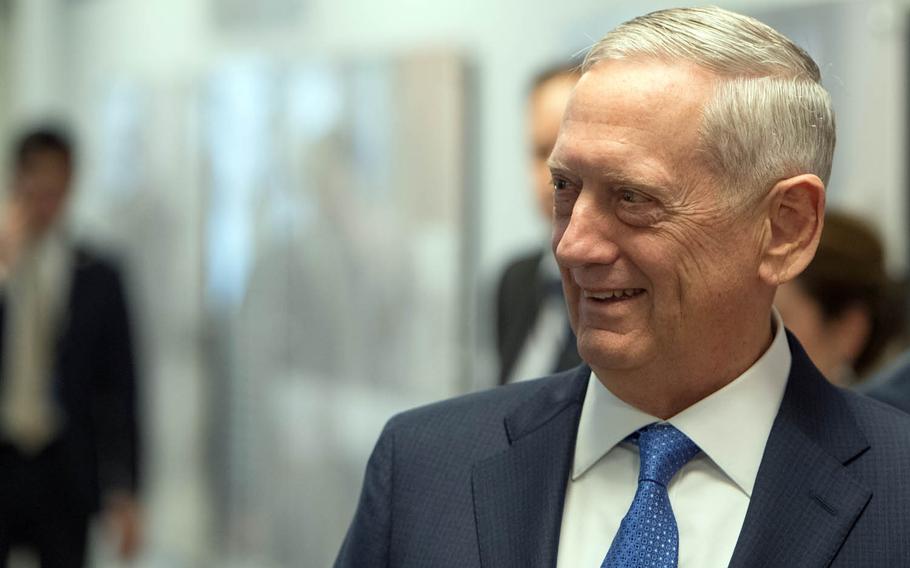 Jim Mattis is sworn in as the 26th secretary of Defense at the Pentagon in Washington, D.C., Jan. 27, 2017. (Jette Carr/Defense Department) 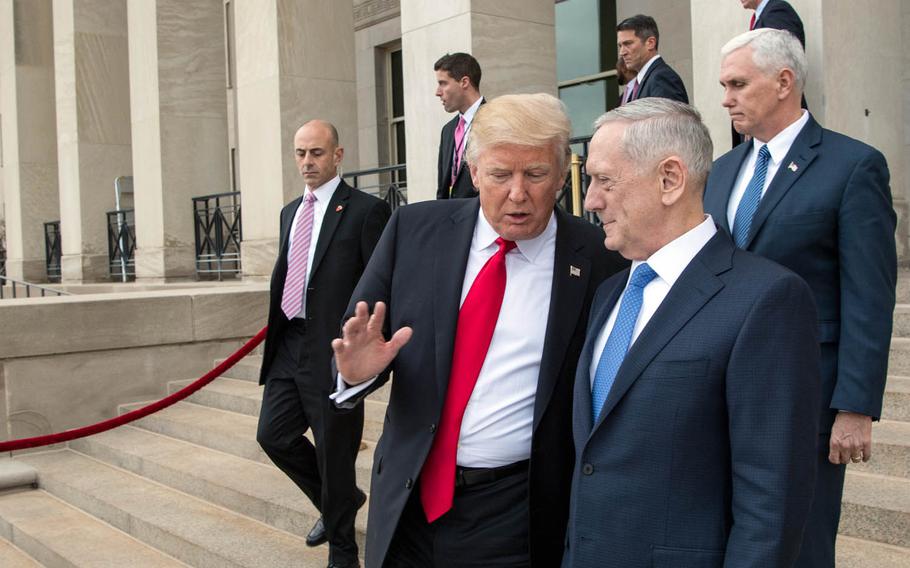 Jim Mattis’ debut trip abroad as Pentagon chief comes amid strong fears that North Korea may be preparing for another missile test, following a declaration by the country’s leader that it is in the “final stages” of developing an intercontinental ballistic missile.

In a phone call Tuesday, Mattis and his South Korean counterpart, Han Min-koo, agreed to strengthen the countries’ longstanding alliance “to defend against the evolving North Korean threat,” the Pentagon said.

The retired Marine general also vowed that “the U.S. will stand shoulder to shoulder” with the South Korean forces, it added.

South Korea’s defense ministry said they also agreed to deploy an advanced U.S. anti-missile battery on the peninsula as scheduled despite Chinese objections, and to maintain readiness in case of aggression by the North.

Mattis was scheduled to meet with South Korea’s acting President Hwang Kyo-ahn and National Security chief Kim Kwan-jin on Thursday, then will meet with Han Friday at the ministry’s headquarters in Seoul before flying to Japan.

“Mattis’ decision to visit Seoul for his first overseas trip after being appointed as defense secretary will deliver a very timely and stern message to North Korea,” Han said in the statement.

Such reassurances are likely to be a major topic in Mattis’ meetings, amid worries over comments made by Trump during the presidential campaign calling for the U.S. allies to pay more for their defense.

Trump also reiterated an “ironclad commitment” to defending South Korea and Japan in separate phone calls with leaders of the allied nations this week. Japan and South Korea will be looking for proof that he will stick to that promise, analysts said.

“So far it looks like business as usual,” said Robert Kelly, a political science professor at Pusan National University in South Korea. “My biggest concern is does Trump really mean it. He’s made it very clear that he sees America’s allies in transactional terms.”

Analysts said Mattis’ visit would also be a show of force to make sure the North Koreans know that the untested U.S. administration won’t waver.

“I think he’s going to want to project strength about the North Korean problem,” said Jeffrey Lewis of the Middlebury Institute of International Studies in Monterey, Calif.

That was likely to include a reiteration of plans to conduct annual war games with South Korean forces in the spring, despite calls by the North to cancel them, Lewis said.

Seoul and Washington insist the joint exercises are defensive in nature, but Pyongyang considers them a rehearsal for an invasion and frequently retaliates with a form of provocation.

Japan also has taken strides to maintain the alliance. Prime Minister Shinzo Abe became the first foreign head of state to meet with Trump after his election in November, and the leaders plan to meet again on Feb. 10 in Washington.

“Disarray in the Japan-U.S. alliance could invite dangerous provocative actions from China and North Korea,” the Yomiuri Shimbun newspaper said in an editorial on Monday.

Japan also will have no choice but to show the Trump administration it’s willing to step up its financial commitment as well, said Toshiyuki Shikata, a defense expert and retired Japanese officer.

“It needs to increase its defense budget and speed up upgrading its equipment,” he said.

It’s unclear how true Kim Jong Un’s claim was in his New Year’s speech that North Korea was in the “final stages” of developing an ICBM, which would put his regime closer to its stated goal of targeting the U.S. mainland with a nuclear-tipped missile.

But Pyongyang showed clear technical progress last year with two underground nuclear explosions and some two dozen tests of short- to mid-range missiles, including one that flew successfully from a submarine. Those could potentially be used against South Korea and U.S. bases elsewhere in the region.

Satellite imagery from Jan. 22 also indicates that North Korea has restarted a reactor used to produce plutonium for its nuclear-weapons program, according to the 38 North website that monitors the country’s activities.

Operations at the Yongbyon Nuclear Scientific Research Center could be running at a “considerable” level, said the website run by the U.S.-Korea Institute at Johns Hopkins University.

North Korea is already believed to have between 10 to 20 nuclear weapons, although experts differ on whether it has managed to miniaturize one to fit on a missile.

Trump’s administration has gotten off to a rocky start in its relationship with Beijing by saying its traditional “One China" policy by which it doesn’t challenge the communist country’s claim over the self-ruled island of Taiwan is negotiable.

“Obviously, if you pick a serious fight with China over Taiwan, you’re going to lose China’s cooperation over everything else,” Kelly said.

Trump also has mainly focused on the threat from Islamic extremists in his executive orders and rhetoric since his Jan. 20 inauguration. But analysts said the visit by Mattis is a clear sign that Trump is committed to Asia.

“People thought he would go to the Middle East first, but what we see now is he’s coming to South Korea first,” said Kim Hyun-wook, a professor at the Korea National Diplomatic Academy in Seoul.

Stars and Stripes reporters Yoo Kyong Chang in Seoul and Hana Kusumoto in Tokyo contributed to this report.