Mattis: US must face ‘somber reality’ of military option on North Korea 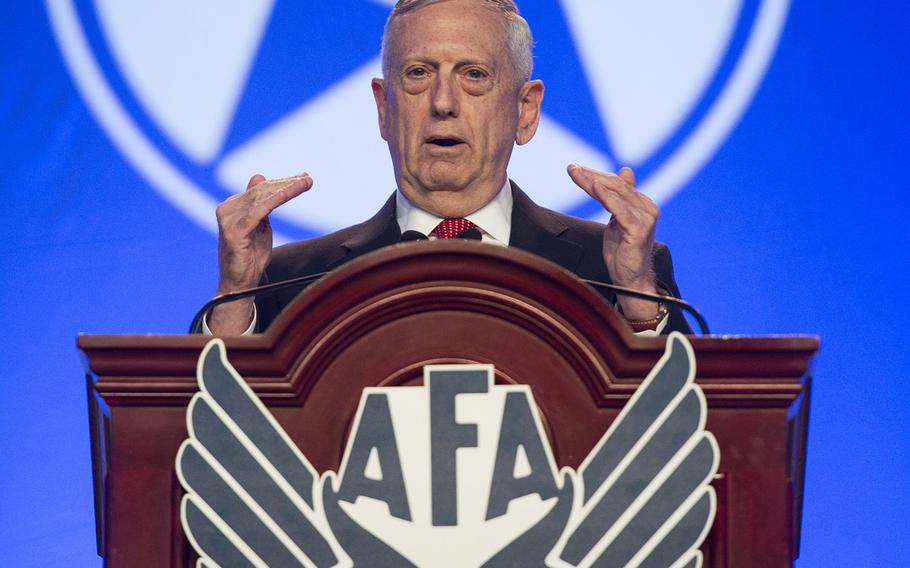 WASHINGTON — The United States must face the “somber reality” that military action against North Korea could be necessary should diplomacy fail to curb the nation’s hostile provocations, Defense Secretary Jim Mattis said Wednesday.

“This is still a diplomatically led effort,” Mattis told the Air Force Association’s annual Air, Space & Cyber Conference in Washington. “It is one that is fully supported by the Department of Defense, in terms of ensuring that the military options exist.”

Mattis’ comments came just one day after President Donald Trump during his speech to the U.N. General Assembly threatened to “totally destroy” North Korea if Kim Jong Un’s regime forced the United States to defend itself or its allies.

Pentagon leaders have provided Trump with a range of military options for dealing with Kim, whose regime has launched 22 missiles in 2017. This month, North Korea conducted its sixth, and most powerful, nuclear test.

Mattis and other Pentagon leaders have been tight-lipped on what the options entail. The defense secretary told reporters Monday that they include actions that would not risk Seoul, South Korea’s capital of more than 10 million in range of North Korean artillery. He declined to say whether the options included a cyberattack.

A war on the Korean peninsula would be brutal and likely kill millions of civilians on both sides, Mattis and other Pentagon officials have said.

That’s the primary reason that the United States for now is relying on the international community to find a diplomatic solution, Mattis said Wednesday. The increased sanctions on North Korea approved by the entire U.N. Security Council, which includes Russia and China, is a positive sign that Kim should heed, he said.

Nonetheless, Kim has shown no sign that he intends to stop testing missiles or abandon his nuclear program. Just days after the U.N. Security Council approved new economic sanctions in response to the Sept. 3 nuclear test, Kim’s regime launched an intermediate-range ballistic missile over Japan and into the Pacific Ocean on Sept. 15. It was the second straight test that sent a missile over Japan.

Mattis told Air Force personnel in the audience Wednesday that they were perhaps the single greatest deterrent the United States and its allies have to prevent North Korea or other adversaries from attacking.

The Air Force, with its vast arsenal of bomber and strike aircraft, has “the power of intimidation” that is unrivaled by any other air force in the world, he said.

The military routinely sends strategic bombers and fighter aircraft to fly near North Korean airspace after a Kim provocation.

On Monday, for example, two American B-1 bombers and four F-35 strike fighters flew over the Korean Peninsula alongside South Korean aircraft in a show of force that followed Kim’s latest missile launch. The planes dropped live weapons over a South Korean training range, according to U.S. Pacific Command.