Mattis tapped to replace Petraeus at the helm of Central Command 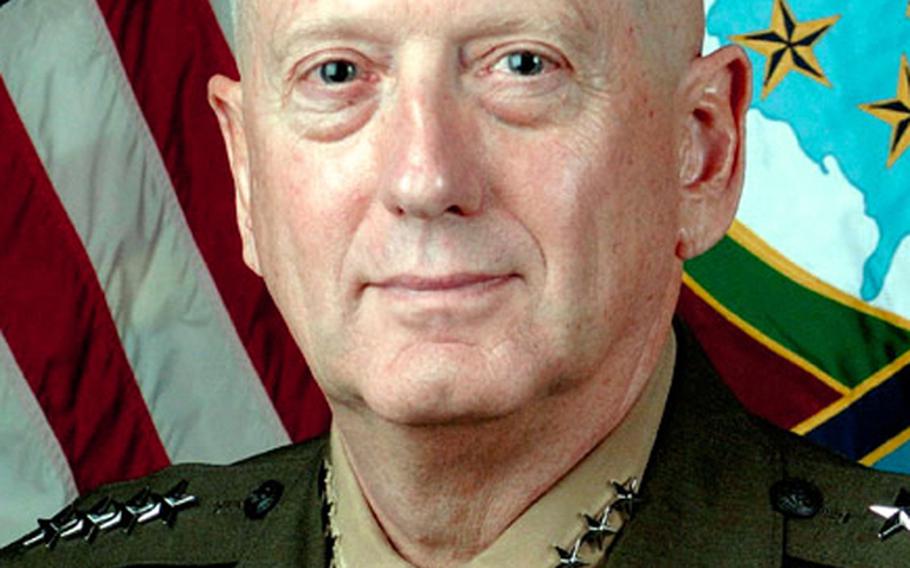 Mattis, the outgoing commander of U.S. Joint Forces Command, was passed over for the Marine Corps commandant position earlier this year and was looking at retirement in coming months. But Gates said he tapped Mattis because of his &ldquo;outstanding combat experience&rdquo; and the need to get &ldquo;the best people in the best places.&rdquo;

If confirmed by the Senate, Mattis would replace acting CENTCOM commander Marine Lt. Gen. John Allen, the previous deputy commander there. Gates said he did not have any concerns about having Marines in the top two spots at CENTCOM, but added that it would likely be only a temporary situation.

Allen took over after Gen. David Petraeus left to assume command of the U.S. and NATO effort in Afghanistan when Gen. Stanley McChrystal was forced to resign.

Mattis played a key role in the Iraq&rsquo;s battle of Fallujah in 2004 as commander of the 1st Marine Division. He also drew criticism a year later when NBC aired video of him talking about the pleasure he derived from combat, calling it &ldquo;a hoot.&rdquo;

&ldquo;You go into Afghanistan, you got guys who slap women around for five years because they didn&rsquo;t wear a veil,&rdquo; Mattis told an audience in San Diego. &ldquo;You know, guys like that ain&rsquo;t got no manhood left anyway. So it&rsquo;s a hell of a lot of fun to shoot them.&rdquo;

But on Thursday Gates said Mattis is one of the military&rsquo;s &ldquo;most innovative and iconoclastic thinkers&rdquo; and &ldquo;his insights into the nature of warfare in the 21st century have influenced my own views of how the military must be shaped and postured for the future.&rdquo;

Mattis also served as a battalion commander during Operation Desert Storm. During his career he earned the Defense Distinguished Service Medal twice, the Legion of Merit and the Bronze Star with &ldquo;V&rdquo; for valor.

Along with his combat experience, Mattis played a key role in the Defense Department&rsquo;s 2010 quadrennial defense review, which sets defense policy and strategy for coming years.

Gates called the CENTCOM position &ldquo;a critical post at a critical time,&rdquo; even with Petraeus&rsquo; continued presence in the region. Along with the ongoing war in Afghanistan, Mattis will be charged with overseeing the drawdown of troops from Iraq, the military threat posed by Iran, and rising regional terrorist threats.

Gates said defense officials will push the Senate for a speedy confirmation of Mattis to limit disruption in operations.