Mattis says US will look at possible base sites in Poland 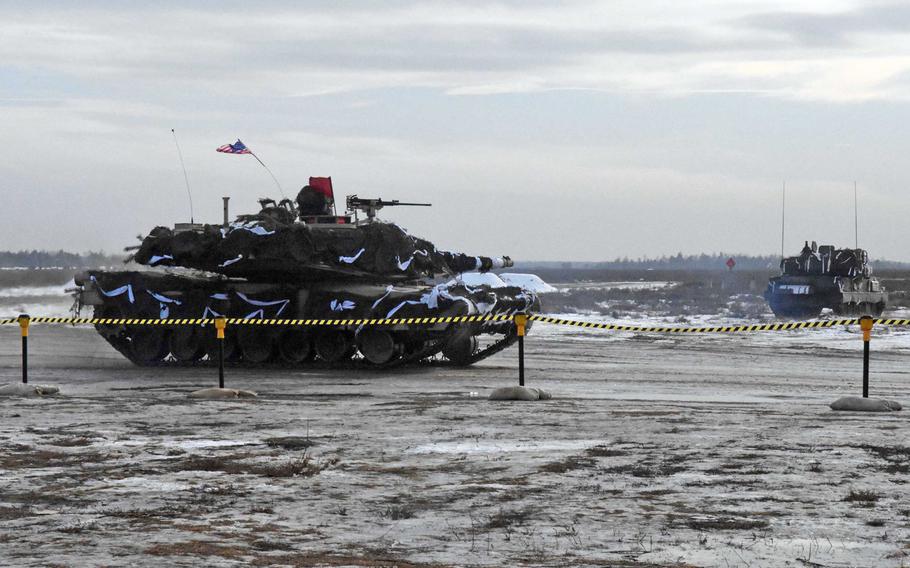 Buy Photo
A U.S. Army M1 Abrams tank speeds to its firing position during a live-fire exercise involving Polish and American troops in Zagan, Poland, in 2017. The U.S. military is investigating sites for a potential base in Poland. (Martin Egnash/Stars and Stripes)

The U.S. military is investigating sites for a potential base in Poland, a country that has offered up to $2 billion toward developing infrastructure for stationing a permanent American military force.

The Pentagon will look at land the Poles have offered to determine if a base makes sense there, Defense Secretary Jim Mattis said Monday.

“The first thing we have to do is look at what are they offering, because then you size up what it can actually hold and sustain,” Mattis told reporters in Washington, adding no final decisions have been made. “So we are in the exploratory phase of doing just that.”

Poland, which has long lobbied for more American troops, made its most overt request during a meeting last week between President Andrzej Duda and President Donald Trump.

When Trump said the U.S. was open to the idea of a base in the central European country, considering Warsaw’s willingness to contribute funding, Duda added that any new site could be called “Fort Trump.”

Inside the Army, there hasn’t been a groundswell of interest in adding large numbers of U.S. forces permanently based in Europe, let alone Poland. Over the past couple of years, Army leaders have touted a rotational model that has enabled the service to maneuver forces along NATO’s eastern flank without having to invest in schools, recreation, support services and other infrastructure that come with a more permanent force.

Mattis, a retired Marine general, could be sympathetic to the Army’s rotational model as the debate heats up over setting up shop in Poland — the Corps has historically favored troop rotations over extensive overseas bases.

The U.S. already has a quasi-permanent force in Poland—an Air Force detachment operates year-round at Lask Air Base. A U.S.-led NATO battle group is positioned 50 miles from Poland’s border with the Russian enclave of Kaliningrad, and a mission command headquarters for all Army operations in the Baltics and Poland is situated in the city of Poznan.

As the military looks at sites, access to training grounds will likely be a major factor if any potential buildup focuses on ground forces.

Szczecin and Zagan in western Poland both have large ranges that the U.S. could utilize or expand upon. In the northeastern town of Orzysz, where the U.S.-led NATO battle group now operates, U.S. and allied units conduct regular large-scale, live-fire drills.

Among allies, opinions on a permanent base in Poland are mixed. NATO has emphasized the rotational nature of its expanding mission along its eastern flank, and key states like Germany and France oppose the idea of setting up permanent bases.