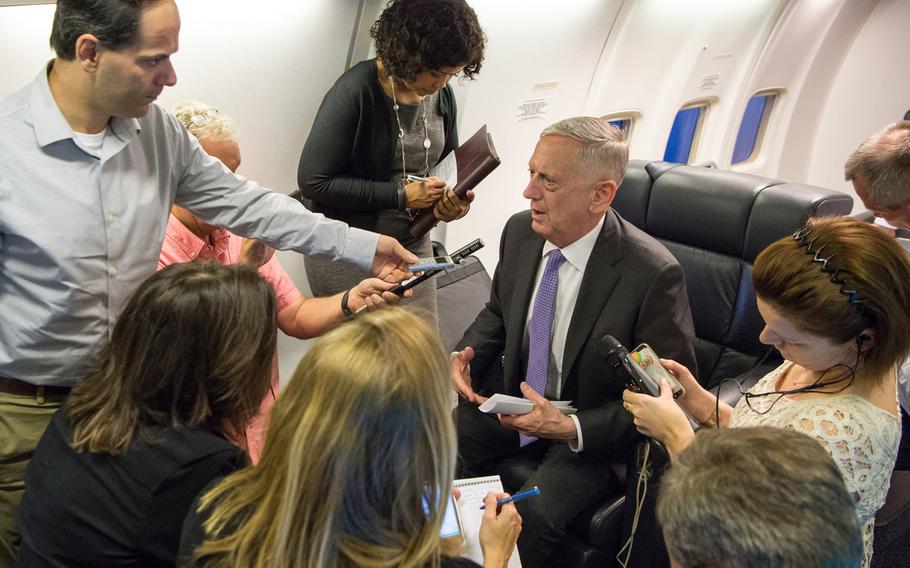 Secretary of Defense Jim Mattis speaks to the press during a flight to Garmisch, Germany, on Monday, June 26, 2017. ( Jette Carr/U.S. Air Force)

MUNICH — The Pentagon said Tuesday that the United States has detected “active handling of chemical weapons” at Syria’s Shayrat air base, which prompted the White House to warn President Bashar Assad that he would “pay a very heavy price” if those weapons are used.

Nevertheless, Secretary of Defense Jim Mattis said Monday that the United States will avoid getting drawn deeper into the Syrian civil war. The warning to Assad was based on aerial surveillance of the Shayrat base in the last few days, said Navy Capt. Jeff Davis, a Pentagon spokesman. Davis did not get into specifics Tuesday. On April 4, a chemical weapons attack was launched from the Shayrat base against Syrian civilians. Officials in Damascus dismissed the U.S. accusations. Ali Haidar, the Syrian minister for national reconciliation, told The Associated Press that the charges foreshadowed a new diplomatic offensive at the United Nations against the Syrian government. Dmitry Peskov, a spokesman for Russian President Vladimir Putin, said, “Such threats to Syria’s legitimate leaders are unacceptable.”

The charges and countercharges came as tensions between U.S.-backed opposition forces and pro-government units have escalated in southern Syria, where the United States maintains a base to train Syrian rebels to fight the Islamic State. Pro-Assad forces backed by Russia and Iran also have a presence in the area, close to where Syria’s borders converge with those of Jordan and Iraq.

So far, to avoid further escalation, the United States has relied upon no combat zones and several lines of communication with Moscow. Still, on June 18, a U.S. Navy F/A-18E Super Hornet shot down a Syrian Sukhoi Su-22 bomber that attacked U.S.-backed rebel forces. U.S. jets in southern Syria have also downed two Iranian-made drones that appeared to pose a threat to those forces.

“How do you avoid mission creep?” Mattis said as he traveled to Europe for meetings with defense ministers at NATO. “You stay focused on where the enemy is and you set up any number of coordination efforts if you’re getting near converging forces, either Assad regime or Russian. You have to assume there are either Iranian officered or Lebanese Hezbollah elements with them. So what we do is we keep moving against ISIS.”

Pro-Assad forces are seeking to maintain a strategic stronghold in southern Syria as they prepare for the anticipated struggle after the fall of ISIS’s capital in the town of Raqqa — the fight to retake control of the fertile Euphrates River Valley.

Fighting in the 150-mile-long valley is likely to bring U.S., Russian, Syrian — and potentially Iranian and Hezbollah – forces in close proximity to one another and will require a commitment to staying out of each other’s no combat zones, Mattis said. It will require rigorous communication through the several channels that the United States and Russia have established to avoid getting tangled in Syria’s civil war.

“As you mix more forces more closely together,” the risk increases, Mattis said. “You’ve got to really play this thing very carefully,” he said. “The closer we get the more complex it gets.”

The chemical weapons attack on Idlib spurred Washington to launch dozens of cruise missiles into Syria to destroy aircraft and support structures at the Shayrat base. Moscow and Damascus vehemently denied banned weapons had been used by the government side, with Putin describing the incident as a rebel “provocation.”

There are about 900 U.S. servicemembers in Syria advising, training and providing fire support for an estimated 50,000 Syrian forces that the United States now supports. But Syria has been in a civil war since 2011, and many of those U.S.-backed forces are also considered a threat by the Assad government.

“We just refuse to get drawn into a fight there in the Syria civil war,” he said.

Mattis said that as the next fight against ISIS fighters in the Euphrates River Valley approaches, “we’ll work that fight, again, with deconfliction efforts.”

That could mean that the valley, with so many competing factions fighting in it, could be divided into even smaller zones where U.S., Syria and Russian forces would restrict their operations, he said.

The no combat zones will not result in a partitioned Syria, Mattis asserted.

"It’s probably not going to look that neat,” he said. “It’ll be based on where does the river bend here, which side of the river is the town on there.”

“As long as it is worked out by the commanders and enough people know about it in sufficient time, there are ways that are proven that we can do this,” Mattis said.