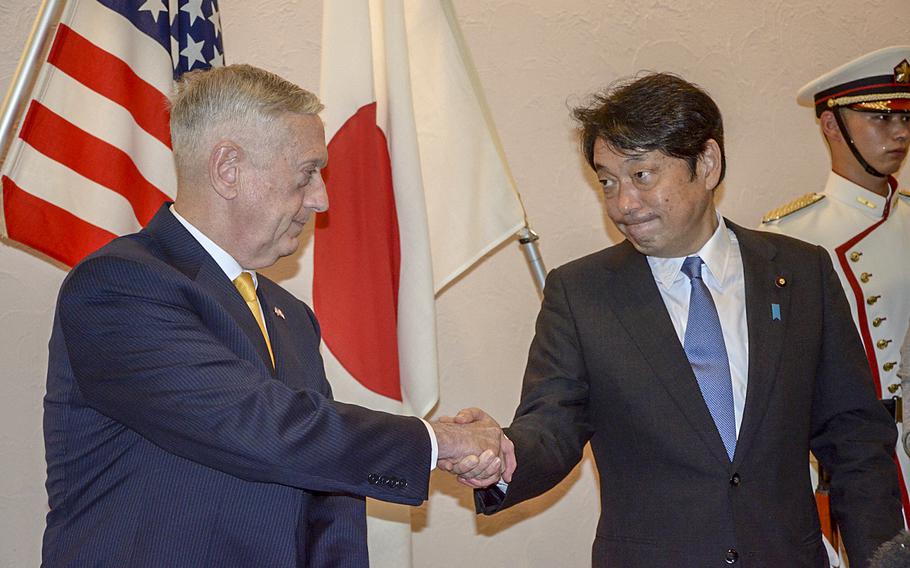 TOKYO, Japan — Defense Secretary Jim Mattis had some reassuring words for his Japanese counterpart during a visit to Tokyo Friday amid concerns about President Donald Trump’s decision to cancel annual war games with South Korea.

Mattis said the U.S. will not jeopardize its alliance “with another democratic and free nation” in its negotiations with North Korea.

“We are in the midst of very unprecedented negotiations with North Korea, but in this dynamic time, the longstanding alliance between Japan and the United States stands firm,” Mattis, who was in South Korea a day earlier, told reporters at Japan’s Ministry of Defense.

Japan was the final stop for the Pentagon chief during a trip that also included a visit to Beijing. Mattis told the reporters in Tokyo that the U.S. relationship with China would be defined by the two nations’ ability to competitively coexist.

“We look to cooperate where and when possible and we will compete vigorously where we must,” he said.

This week marked Mattis’ seventh trip to the region since he became defense secretary, and the fifth time in three months that he and Japanese Defense Minister Itsunori Onodera have met.

“The U.S.-Japan alliance is the cornerstone of Indo-Pacific stability and our commitment to this alliance remains ironclad with a long-term ally,” Mattis said. “These visits represent just how strongly we prioritize this relationship between our two militaries.”

The defense chiefs, who met in private before talking to the press, said they discussed denuclearization of the Korean Peninsula.

“This decision was taken to create space for our diplomats to negotiate strongly and increase the prospect for a peaceful solution on the peninsula,” Mattis said. “At the same time, we maintain a strong collaborative defensive stance to ensure our diplomats continue to negotiate from a position of unquestioned strength.”

Onodera wore a blue ribbon to the meeting in remembrance of Japanese abducted by the North.

Japan is seeking the return of 12 known abductees. Mattis called it “a humanitarian issue always present in our deliberations” and said President Trump raised the abductees issue with Kim Jong Un during their summit earlier this month.

Onodera said his talks with Mattis had been “a very candid and open exchange of views.”

Japan will “continue to cooperate” with the U.S. to accomplish the goal of a denuclearized North Korea, and will “continue efforts to counter illegal ship-to-ship transfers of goods by North Korea in coordination with other countries,” he said.

Onodera also emphasized the importance of safety among U.S. military in Japan, referencing the recent discovery of a bullet on private property and aircraft issues in Okinawa.

The defense chiefs discussed happenings in the South China Sea and East China Sea, which have long been a source of tension as China and its neighbors dispute territory in the region – including Japan’s Senkaku Islands, which China calls the Diaoyu Islands. The Navy commonly patrols and conducts freedom-of-navigation operations in the seas.

“We shared our understanding of the situation in the East and South China seas and once again we affirmed that Article 5 of the Japan-U.S. security treaty applies to the Senkaku Islands,” Onodera said. “We reaffirm the importance of our commitment to the South China Sea.”

Article 5 of the treaty states that both nations will respond to armed attacks by third parties that occur in Japanese territory.

Mattis told Onodera that he “listened closely” to his insight and looks forward to continuing their relationship.

“I thank Japan for its ceaseless effort to promote stability and security,” Mattis said.