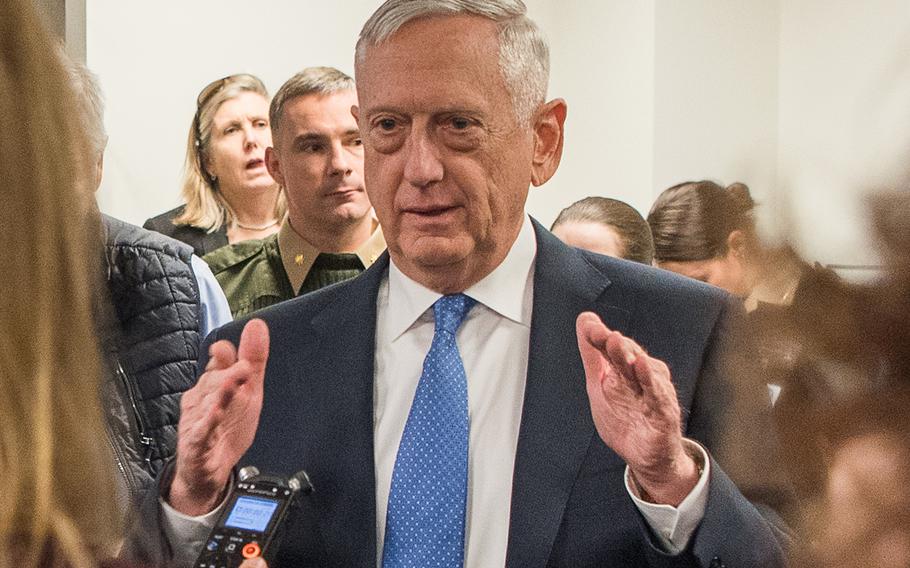 Defense Secretary James N. Mattis speaks with members of the press at the Pentagon in Washington, D.C., Jan. 5, 2018. (Amber Smith/DOD)

WASHINGTON – Defense Secretary Jim Mattis vowed Friday to continue working with the Pakistan government to defeat terrorism in south Asia despite the United States stopping nearly all its financial aid to the country.

U.S. personnel use key air and ground supply routes that run through Pakistan into Afghanistan to supply American forces. But Mattis said he was not concerned that Pakistan might cut off access to the supply routes as retaliation for the State Department announcement Thursday that the United States would stop all military aid to the nation.

An official with President Donald Trump’s administration told The Associated Press on Thursday that $2 billion in military aid would be withheld until Pakistan “takes decisive action” against terrorist groups, including the Taliban, the United States has long accused Pakistan of protecting. “We are still working with Pakistan and we will restore the aid if we see decisive movements against the terrorists who are as much of a threat against Pakistan as they are against us. We’ve had strong disagreements on some issues and we are working on those,” Mattis told reporters at the Pentagon.

The United States and the Afghanistan government that it has supported through 16 years of war have long accused segments of Pakistan’s government and military of harboring Taliban senior leaders and the Haqqani Network, a terrorist group closely associated with the Taliban that has claimed responsibility for large-scaled attacks in Afghanistan. As part of Trump’s new strategy for stabilizing south Asia, which includes Afghanistan, Pakistan and India, the United States called on Pakistan to increase pressure on those groups.

Mattis on Friday was quick to point out Pakistan’s own contributions to the fight against terrorism, echoing the State Department, which acknowledged Thursday that tens of thousands of Pakistani troops have been killed fighting the Pakistani Taliban, al-Qaida and ISIS in recent years.

But the country must be more consistent about targeting all terrorist groups that operate in its country, Mattis said, especially along the nation’s mountainous border with Afghanistan, where militants have been known to plan attacks targeting American troops.

U.S. defense officials acknowledged Friday that Pakistan could cut off ground and air supply routes that provide the United States the cheapest way to move supplies into Afghanistan to support its roughly 14,000 troops there.

Mattis said he had no indications Pakistan would make such a move, but it would not be unprecedented.

Pakistan closed off American access to the supply routes in late 2011 after two dozen Pakistani soldiers were killed by NATO troops in an incident along the country’s border with Afghanistan. That move forced the U.S. military to rely solely on expensive alternative routes, primarily through central Asian countries, for more than six months until Pakistan reopened their routes. A Pentagon report from 2012 estimated the temporary change in supply routes cost the Defense Department more than five times what it would have moving those supplies through Pakistan.

It is not clear precisely how much of its supplies the United State currently moves through the Pakistani routes. Defense officials, who spoke on the condition of anonymity, said they could not discuss the specifics of operation logistics, citing security concerns.

However, the officials said the United States builds flexibility and redundancy into their supply systems to ensure there are options, if they are needed. Pakistan cutting off access to its routes, an official said, is one such condition for which the Pentagon has planned.

Pakistani officials on Friday were critical of the United States’ actions.

“Working toward enduring peace requires mutual respect and trust along with patience and persistence,” Pakistan’s foreign ministry said in a statement, according to the Washington Post. “Arbitrary deadlines, unilateral pronouncements and shifting goal posts are counterproductive in addressing common threats.”

Trump, in a New Year’s Day tweet, said the United States had “foolishly” provided Pakistan more than $33 billion in aid during the past 15 years and had received only “lies & deceit” in return.