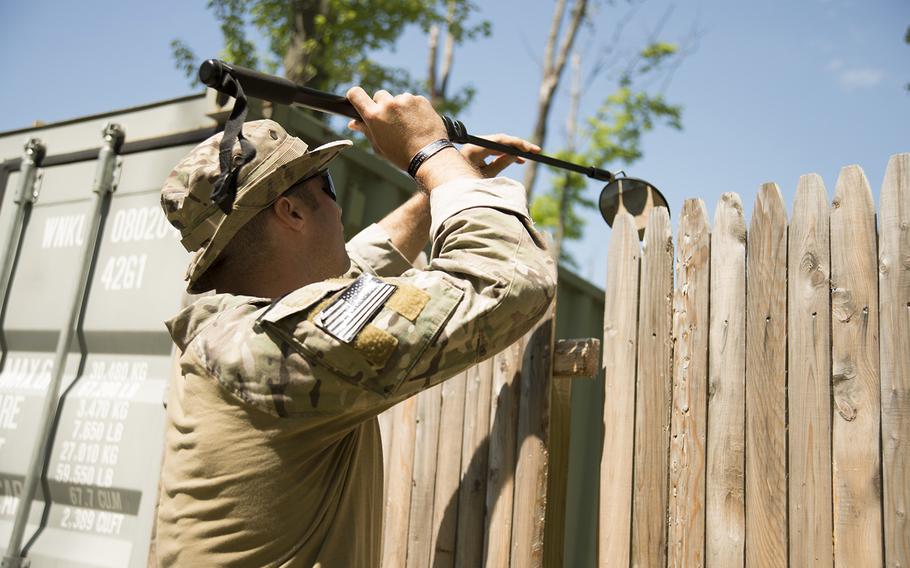 Maj. Daniel O'Neil, from 158th Fighter Wing Explosive Ordnance Disposal, sweeps a fence with a mirror to see what is behind it during a training scenario at the Ethan Allen Firing Range, Jericho, Vt., May 27, 2015. (Daniel DiPietro/U.S. Air Force)

WASHINGTON — Defense Secretary Jim Mattis on Thursday said any portion of the military’s budget used to cover President Donald Trump’s proposed wall along the U.S.-Mexico border might only amount to fencing structures along nearby bombing ranges.

Mattis made the remarks during an exchange with a Texas lawmaker during a congressional hearing.

The military could fund the wall effort for “probably the part, where if I need to…put a fence along a bombing range that’s right next to the border,” Mattis said. “This is a safety consideration. I don’t care who they are, they are human beings. I don’t want them wandering into a bombing range that was active.”

The comments were made during a wide-ranging discussion before the House Armed Services Committee that included the controversial proposal to have the military pay for Trump’s ambitious plan to build a wall along the southern border – one of the president’s central campaign promises. Some lawmakers have questioned whether such an effort is legally plausible, while some experts have said the answer lies in an extensive review of appropriations law.

Soon after, Trump, frustrated with inaction over his demands for a border wall, issued an April 4 memorandum requesting state governors to deploy National Guard troops to the southern border until the wall is built. All four border states – Texas, New Mexico, Arizona and California – have since pledged more than 2,000 troops combined to provide border security assistance in the coming weeks.

Trump’s request was issued under Title 32 of the U.S. Code, which designates a state-led operation that is federally funded. It has been used by prior administrations: more than 6,000 National Guard members were deployed in 2006 under former President George W. Bush, while 1,200 were dispatched under former President Barack Obama in 2010.

Operation Jump Start under Bush cost an estimated $1.2 billion for two years, while Operation Phalanx under Obama came in at costs of about $110 million in the first year.

Rep. Beto O’Rourke, D-Texas, brought up concerns about the wall and the new deployment Thursday that were echoed in a letter from several House Democrats to Mattis and Homeland Security Secretary Kirstjen Nielsen. O’Rourke said recent data rebukes Trump’s claims that the border is becoming increasingly unsafe.

The Department of Homeland Security said in December that arrests for illegal border crossings had reached a 46-year low.

“This is a grave mistake on the part of this country …given everything else we are talking about, all of our other challenges and threats and priorities around the world,” O’Rourke said. “I think this is a gross waste of taxpayer resources. I think this is a wasted opportunity in terms of what those servicemembers could be doing.”

Mattis said 800 troops had been deployed so far in the effort, and another 700 could be deployed in the next wave to assist with aerial and observation support. While Mattis said he’s in constant contact with Homeland Security and Customs and Border Enforcement officials, a series of questions still dominate the mission, such as costs and extent of time the troops will be deployed.

“I cannot tell you the cost yet, sir,” Mattis told O’Rourke.

However, Mattis emphasized the troops will not be involved with arrests.

“These forces will not involve themselves with the migrants themselves or have any law enforcement duties,” he said.