Mattis’ message to Japan, South Korea: We still have your back 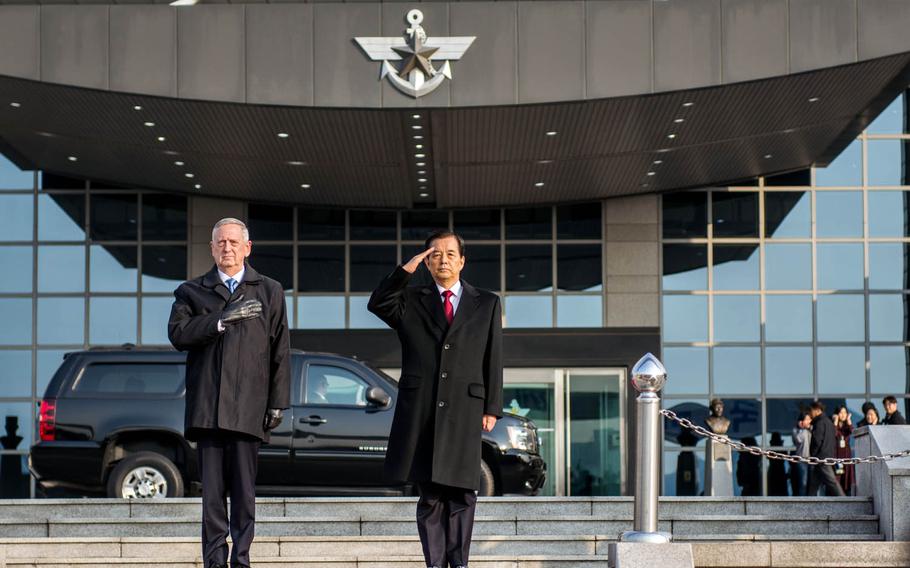 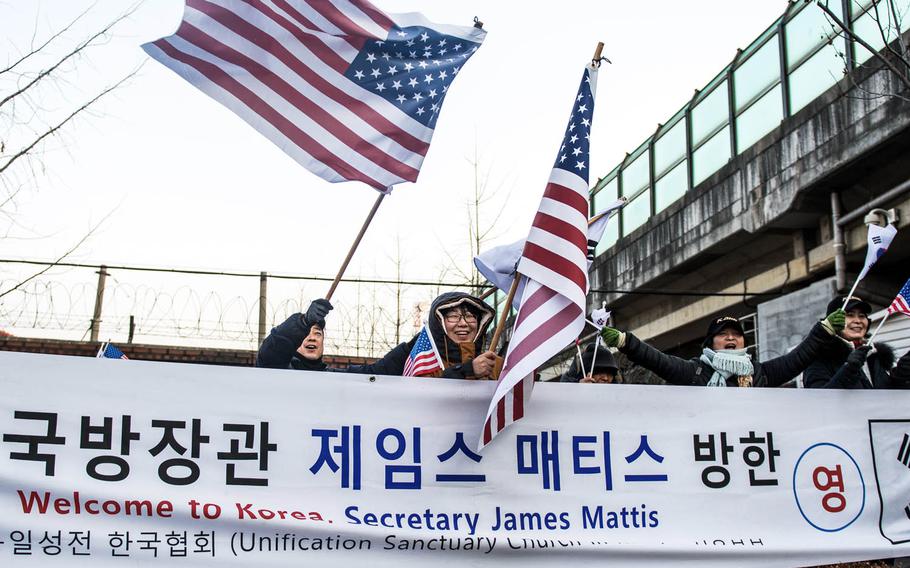 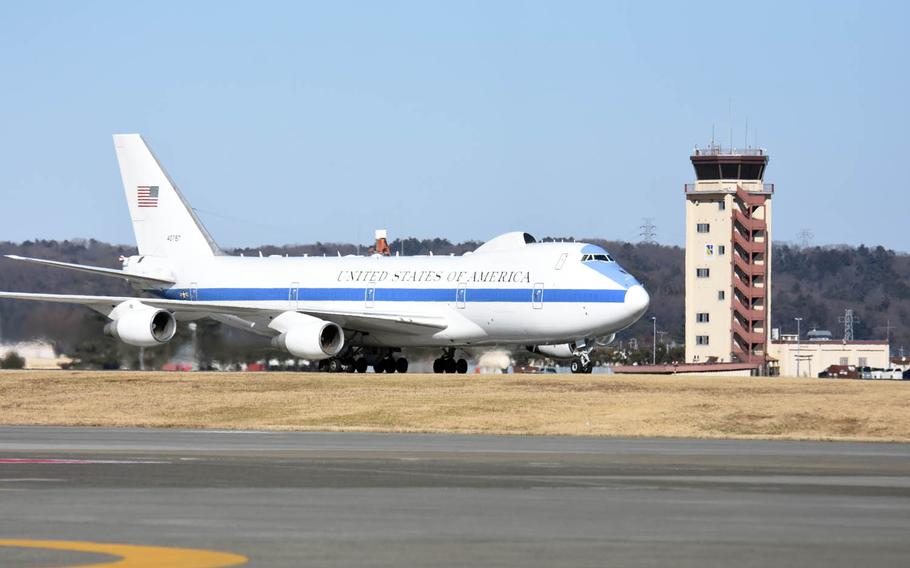 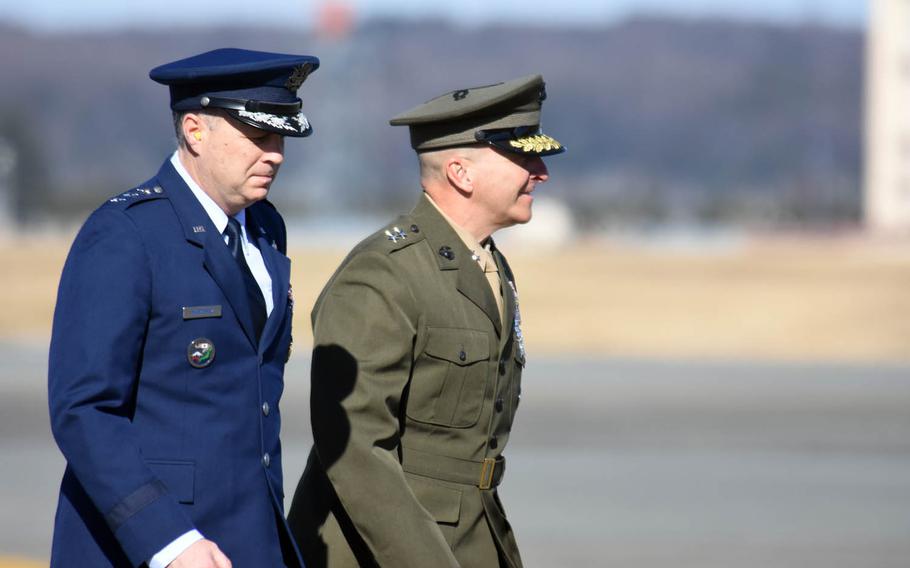 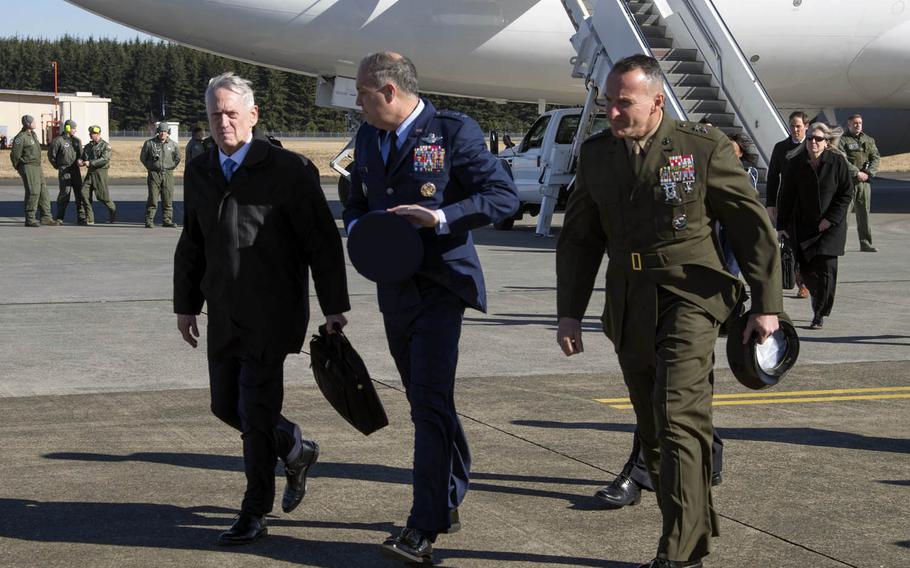 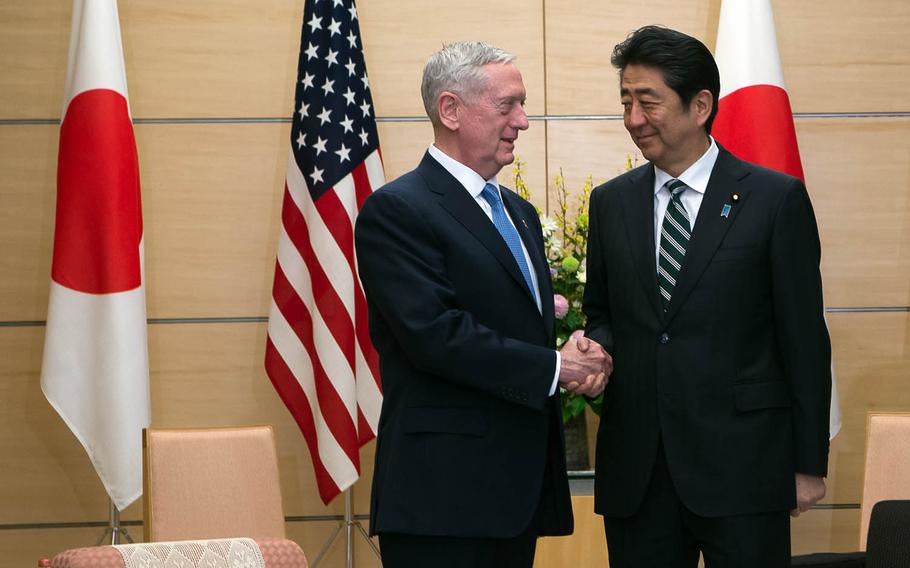 TOKYO — If the Pentagon named bilateral talks the way it did military operations, Jim Mattis’ first trip abroad as defense secretary might have been deemed Operation Allied Reassurance.

Officials in Japan and South Korea, the United States’ closest treaty allies in the region, each had concerns that America might back away after President Donald Trump’s “America First” campaign rhetoric questioned their contributions to the bilateral alliances.

While some concern remains, Japan largely heard what it wanted from Mattis: a renewed commitment to aid Japan if China ever attacks the contested Senkaku Islands; public praise for the billions of dollars annually that Japan contributes to U.S. forces; and reaffirmation of plans for U.S. military realignment in the region.

In Seoul, Mattis talked of ironclad commitments to security partners and warned North Korea of testing the alliance with South Korea.

Mattis also got some reassurances of his own. Japan hinted at taking on a greater security role when Defense Secretary Tomomi Inada told reporters Saturday the country was ready to “enhance our alliance” in the name of regional stability.

Getting Japan to pay substantially more for U.S. bases is unlikely to happen, security analysts and Japanese lawmakers said.

Japan already spends between $1.65 billion and $1.9 billion annually on hosting U.S. troops, depending on currency exchange rates. It also provides another $1 billion in labor and is spending billions more on a future transfer of servicemembers from Okinawa to Guam.

Mattis called the agreement that stations 50,000 servicemembers in Japan “a model of cost sharing and burden sharing.”

“We can point to our Japan-U.S. cost sharing approach as an example for other nations to follow,” Mattis said.

A recent Nikkei poll found a majority of Japanese support current spending levels, with only 5 percent saying they should pay more.

However, Japanese officials have said they are open to expanding their security operations in the region, which should please Washington, though the particulars remain unclear.

Following Inada’s comments Saturday, Mattis cited the 2015 U.S.-Japan defense guidelines, which discussed global operations for the first time, as a document that lays “the foundation for us to do much more together.”

“There is no complacency in terms of the alliance,” Mattis said.

Mattis’ meetings with Inada and Prime Minister Shinzo Abe will guide discussion on security matters when Abe and Trump meet in Washington on Friday, and possibly for golf in Florida the next day, according to Japanese media reports.

Trump’s past comments led to concerns that the alliance would drift, said Yasushi Watanabe, a professor at Keio University’s school of government.

However, Mattis appears to have a realistic grasp of security issues in the region, Watanabe said.

“It’s a valuable opportunity [for Japan] to have someone like that to come first, understand Japan’s situation and relay it to Mr. Trump prior to the summit meeting,” Watanabe said.

Mattis’ phrasing was perhaps more harsh than former Defense Secretary Ash Carter’s at times, but the substance was similar. He called on China to respect international law and resolve disputes through arbitration, rather than coercion.

“We have watched in the South China Sea as China has shredded the trust of nations in the region, apparently trying to have veto authority over the security and economic conditions of neighboring states,” Mattis said. “If we have a dispute, we take them to arbitration — we don’t settle them by military means.”

Mattis ruled out any American “dramatic military maneuvers,” but reasserted the rights of both Navy and commercial vessels to sail through international waters, despite claims by China to the contrary.

Meanwhile, Mattis had little new to say during the South Korea leg of the trip, said Kim Joon Hyung, an international politics professor at Handong Global University in Pohang.

The Trump administration is likely more interested in fighting the Islamic State and addressing trade issues with South Korea than in significant changes within the security alliance, Kim said.

The visit did give Mattis a chance to send a tough message to North Korea, Kim added.

Mattis also got to speak on behalf of THAAD, a missile defense system supported by President Park Geun-hye prior to her impeachment, as well as South Korea’s interim president.

Mattis came to Seoul to gauge the uncertain political situation “because there is a chance of a turnover of political power in South Korea and presidential candidates from South Korean opposition parties are skeptical about the THAAD issue,” Kim said.