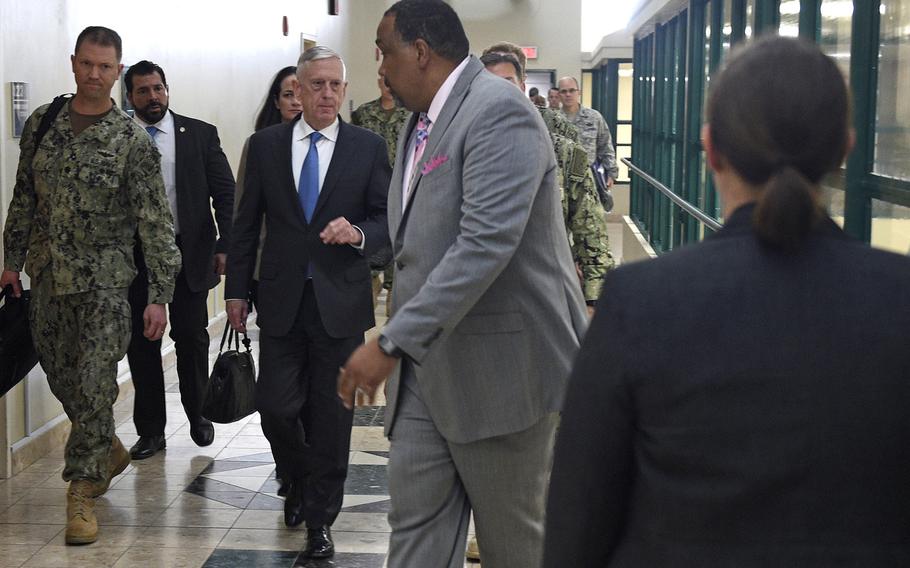 Buy Photo
Defense Secretary Jim Mattis arrives at an auditorium at Naval Support Activity Bahrain for an all hands call on March 15, 2018. Mattis took questions from servicemembers during the event. (Jason Behnke/Stars and Stripes)

Buy Photo
Defense Secretary Jim Mattis arrives at an auditorium at Naval Support Activity Bahrain for an all hands call on March 15, 2018. Mattis took questions from servicemembers during the event. (Jason Behnke/Stars and Stripes) 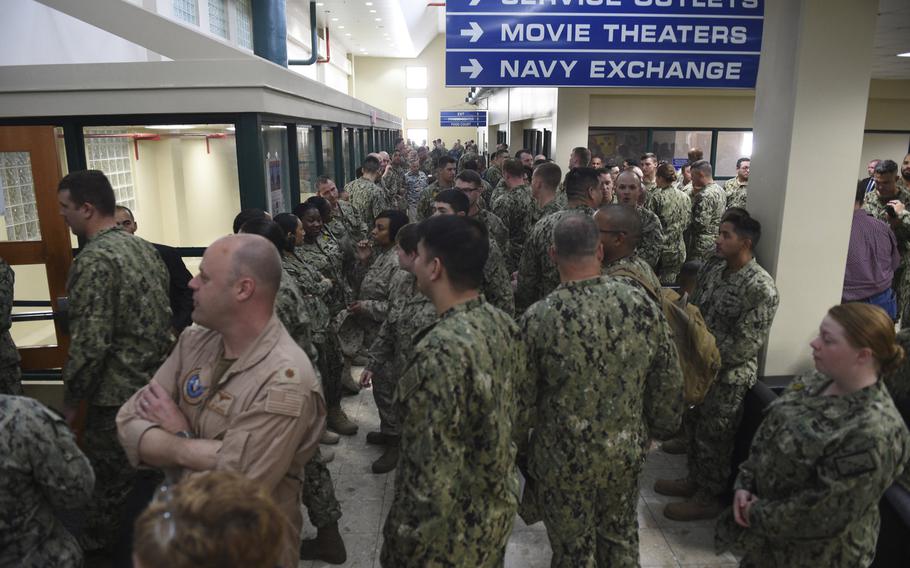 Buy Photo
People fill the hallways prior to an all hands call with Defense Secretary Jim Mattis at Naval Support Activity Bahrain, March 15, 2018. Most of these people shown here had to leave due to overcrowding. (Jason Behnke/Stars and Stripes) 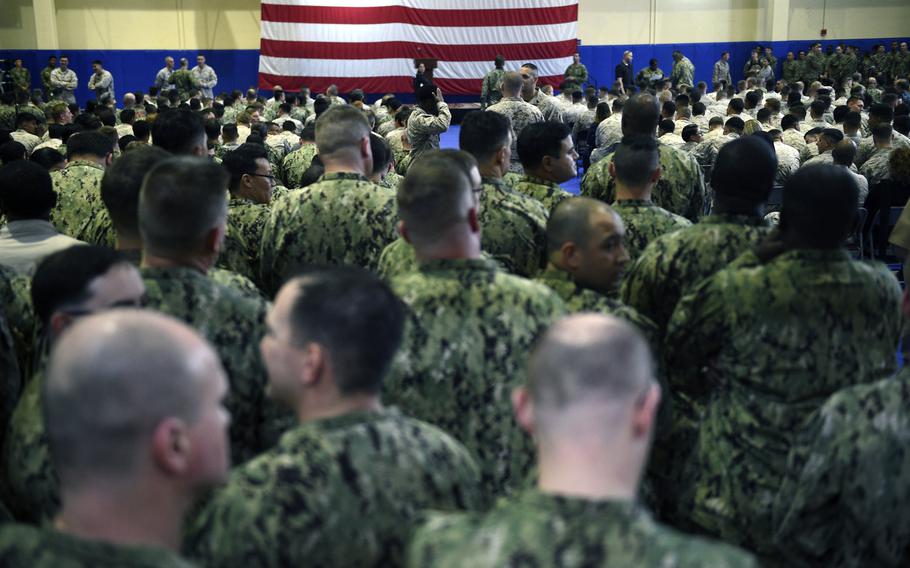 Buy Photo
Servicemembers stand by prior to an all hands call with Defense Secretary Jim Mattis at Naval Support Activity Bahrain on March 15, 2018. (Jason Behnke/Stars and Stripes)

NAVAL SUPPORT ACTIVITY BAHRAIN, Bahrain — Defense Secretary Jim Mattis continued his tour of Southeast Asia and the Middle East in Bahrain, where he met with a crowd of servicemembers Thursday.

Mattis, along with a delegation that included U.S. 5th Fleet Commander, Vice Adm. John Aquilino, also met with King Hamad bin Isa Al Khalifa on Wednesday to discuss the partnership between the U.S. and Bahrain, as well as regional security issues.

“Bahrain is a very strong defense relationship and a vital regional ally to the United States,” Mattis said in a statement. “The basing is essential for our access and U.S. military operations in the Middle East. And they’ve been an excellent host.”

The event Thursday was held in a gymnasium on base and packed beyond capacity, leading facilitators to turn many people away. The talk was off limits to media.

Mattis spent most of his time fielding questions from the servicemembers.

“[I] like staying in touch with those folks and hearing their view of what’s going on [among] our forces that are deployed out here,” Mattis told the Pentagon’s internal DOD News service.

Seaman Jackson Scofield, who attended the event, said afterward that the time Mattis takes to interact with the troops means a lot to them.

“I think it shows that he respects the troops, and he puts in the time to actually get around and look each of us in the eyes and tell us he appreciates everything we’re doing,” Scofield said. “I think all the sailors, Marines, and all branches, I think they really respect this man greatly. He’s a good representation of the American way.”

Many servicemembers remained in the hallway trying to hear what was being discussed and trying to get a picture of Mattis through the doorway.

Bahrain is the headquarters for the U.S. 5th Fleet and a critical base for U.S. efforts at combating piracy, as well as launching missions in both the Middle East and Africa. It’s also close to the Strait of Hormuz, where a large share of the world’s oil supply transits and where contact with Iran in international waters has led to tensions.

For years, the U.S. has accused Iran of unsafe maneuvers directed at U.S. ships; however, in an apparent shift in policy, Iran hasn’t conducted any unsafe provocations since August, Navy officials told Stars and Stripes last week.

Mattis arrived in Bahrain after a visit to Oman and an unannounced visit to Afghanistan, where he met with Afghan President Ashraf Ghani and Chief Executive Abdullah Abdullah. Mattis praised Ghani’s recent offer to negotiate with the Taliban without preconditions, according to a Pentagon statement.