Mattis: Dreamers in the military are protected from deportation 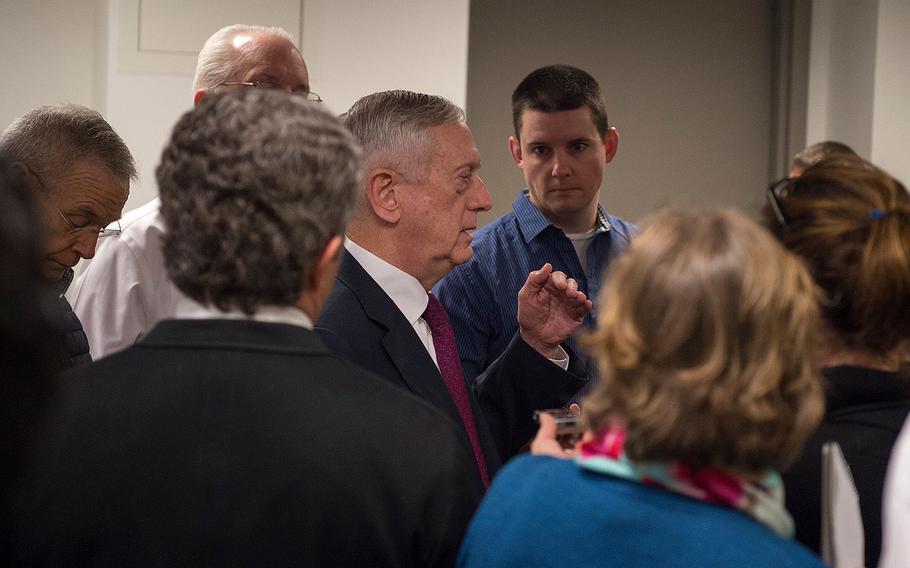 WASHINGTON — Defense Secretary Jim Mattis said Thursday that the roughly 900 undocumented immigrants serving in the U.S. military need not fret over their immigration status even if the program protecting them from deportation expires next month.

“They will not be subject to any kind of deportation,” Mattis told reporters at the Pentagon. Adding later, “We would always stand by one of our people.”

Servicemembers who were brought to the United States illegally as children and are registered in the Deferred Action for Childhood Arrivals, or DACA, program would be allowed to remain in the nation unless they were convicted of a “serious felony” or a federal judge had already ordered them deported, Mattis said Thursday after speaking with Homeland Security Secretary Kirstjen Nielsen about the issue. Those protections also extend to the about 1,000 DACA program enrollees – known as “Dreamers” – who have committed to military service and are awaiting orders to ship to boot camp, as well as reservists and former servicemembers who have been discharged honorably.

The President Barack Obama-era DACA protections, which grant quasi-legal status to its enrollees, are set to expire March 5, leaving hundreds of thousands of undocumented immigrants brought to the United States as children vulnerable to deportation if Congress fails to forge an agreement to protect them.

Dreamers have been allowed to serve in the military since 2009 under a program entitled Military Accessions Vital to National Interest, or MAVNI, which places immigrants with in-demand skills such as language or medical training into the military. They must past stringent background checks to enter the program.

The Pentagon has said some 10,400 individuals, primarily with legal immigration statuses, have served through that program, which can provide them a pathway to citizenship. The Pentagon has not said how many total undocumented immigrants have served in the program.

Mattis’ assurances issued Thursday come after undocumented servicemembers have for months expressed concerns about their statuses in the military and the United States as President Donald Trump’s administration and the Pentagon failed to effectively communicate whether troops would be protected should the program end.

Earlier Thursday, in an essay published by Politico, one future servicemember expressed concerns about his immigration status, urging the military to ensure Dreamers could serve.

William Medeiros, a 25-year-old undocumented immigrant whose Brazilian parents brought him to the United States when he was 6, wrote he fears deportation to a country of which he has little memory, even as he awaits shipment to Army boot camp as part of the MAVNI program.

“I have no ties to my home country and have nothing to fall back on if I would ever have to go back to Brazil,” he wrote of the nation he has not visited since arriving in America. “… I want to fight for this country. I’m willing to die for it. Do the right thing.”

Mattis said the protections for military-related Dreamers have been in place for some time and the concerns were the result of a misunderstanding.

“I want to make sure we do not have any more problems with it,” he said.