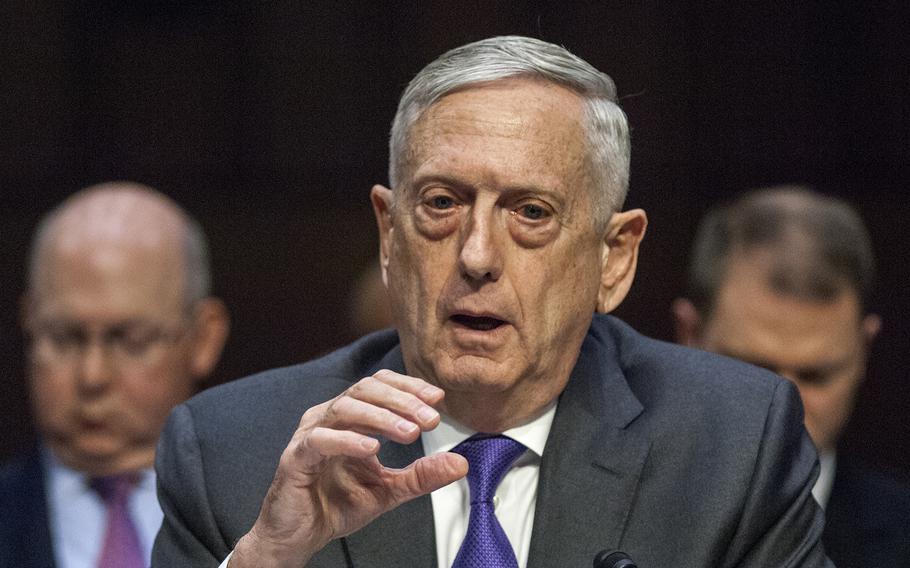 WASHINGTON — Defense Secretary Jim Mattis told lawmakers Thursday that none of the four military services’ top generals nor the chairman of the Joint Chiefs of Staff were consulted before his predecessor permitted transgender people to serve in the armed forces two years ago.

During a heated exchange, Mattis defended his recent policy barring most transgender individuals from serving, telling Sen. Kirsten Gillibrand, D-N.Y., that the directive unveiled under Defense Secretary Ash Carter in 2016 was “opaque” and blocked the Pentagon from revealing issues it uncovered with their service.

The secretary’s response was a rare public assessment of his new policy, released last month in a 48-page document. The new policy, which has been approved by President Donald Trump, has not been enacted, as four federal judges have blocked it, pending the outcome of four discrimination lawsuits filed by transgender individuals and advocates against the federal government.

Despite the ongoing litigation, which Pentagon officials have repeatedly said limits what they can publicly say about the policy, the service chiefs of the Army, Air Force, Navy and Marine Corps have all testified to Gillibrand that they had not received any reports of issues involving transgender servicemembers.

“We cannot report that a problem emanated from a transgender” person, Mattis said Thursday during a Senate Armed Services Committee hearing. “We cannot under the Carter policy do that. So the question you’ve asked the service chiefs and the chairman are ones that, right now, the Carter policy prohibits that very information from coming up, because it’s private information. It’s impossible for them to respond to you.”

Mattis’ policy would bar almost any person from military service who has a history or diagnosis of gender dysphoria and all individuals who have undergone gender reassignment surgery, citing issues of unit cohesion and combat readiness raised by military experts who Mattis assigned to study the issue.

The secretary established the panel of experts, which included the vice chiefs of the four services and the undersecretaries of the Army, Navy and Air Force departments, after Trump unexpectedly announced last year that he planned to ban transgender people from the military.

Gillibrand, who has championed the cause of transgender servicemembers, fired back at Mattis and Marine Gen. Joseph Dunford, the chairman of the Joint Chiefs of Staff, accusing them of developing the new policy based on faulty, non-scientific information.

The senator charged the guidance mirrors past policies that discriminated against minority groups in the military including gays, women and blacks.

“It appears that this report your department has issued is not based on the department’s data or science, but rather on quote ‘potential risks’ that the authors cannot back up,” Gillibrand said. “In fact, this seems to me to be the same unfounded claims and unfounded concerns that led the opposition to repealing ‘Don’t Ask Don’t Tell,’ integrating women into the military, integrating African Americans into the military, and I think you need to do a lot more work on this topic to inform yourselves.”

Gillibrand told Mattis a new study conducted by The Palm Center, a California-based think tank that advocates for transgender peoples’ rights, based on Pentagon data showed transgender troops could deploy without problems.

The tense exchange on Capitol Hill came as six former U.S. surgeons general sent a letter Thursday to the Defense Department arguing against a new ban on transgender men and women serving in uniform.

In the letter, the former top U.S. medical officials charge Mattis and his military experts have “mischaracterized the robust body of peer-reviewed research” on transgender persons’ medical care.

“Research on the effectiveness of medical care for gender dysphoria was the basis of the American Medical Association’s 2015 resolution that ‘there is no medically valid reason to exclude transgender individuals from service in the U.S. military,’ and several of us expressed our support for the resolution at the time of its passage,” the past surgeons general wrote. “In light of last month’s announcement concerning military policy for transgender servicemembers, we underscore that transgender troops are as medically fit as their non-transgender peers and that there is no medically valid reason — including a diagnosis of gender dysphoria — to exclude them from military service or to limit their access to medically necessary care.”