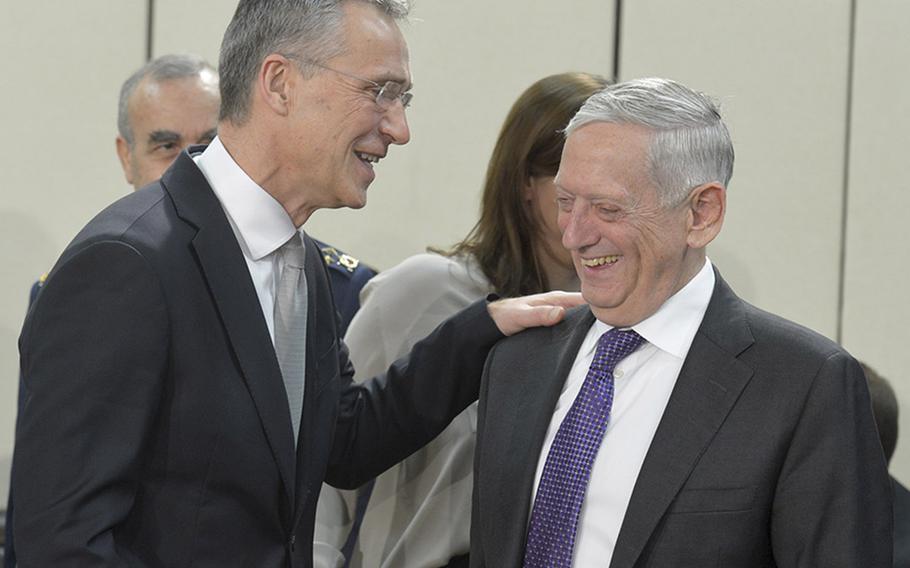 “In Afghanistan, we are committed to filling critical shortfalls in our staff there,” Mattis said during a news conference at NATO headquarters in Brussels on Thursday.

So far, about 12 nations have committed to boosting troop numbers, but “more work needs to be done,” said Mattis, who stopped short of saying how many vacancies remain.

In November, NATO agreed to boost force numbers in Afghanistan in 2018 to expand its Resolute Support mission from 13,000 to 16,000 troops. The alliance’s goal is that roughly half the increase will be manned by U.S. allies and partners.

However, allies in Europe have struggled to meet the U.S. halfway. In recent months, diplomats in Brussels have said 700 more troops is a more realistic number.

For the U.S., the push for more from NATO members extends beyond just the mission in Afghanistan.

Defense spending levels among allies was on the agenda during two days of talks in Brussels. Mattis credited members for improving last year, which marked the largest collective increase in allied defense spending in 25 years, he said.

Still, only 15 of NATO’s 29 members are on track to reach the benchmark of dedicating 2 percent of gross domestic product to military matters by 2024.

Germany, Europe’s economic powerhouse, has not laid out a clear plan for reaching NATO spending guidelines.

Mattis said he remains optimistic that Berlin will not renege on its obligations.

“I am confident that Germany will continue to move up in terms of its defense spending at a pace we all hope is matching the strong economy it has,” he said.

After talks ended Thursday, Mattis was bound for Stuttgart, Germany, to meet with officials at U.S. European Command.

During his Europe tour, which included an earlier stop in Rome, the conflict in Syria and tensions with Turkey were also discussed.

Ankara has repeatedly lashed out at the U.S. in recent weeks for backing Kurdish fighters in Syria, who have been a key U.S. partner in the fight against the Islamic State. Turkey, however, views the Kurds as an extension of the Kurdistan Workers’ Party, or PKK, which it regards as a terrorist group.

Some of Turkey’s top political leaders have even suggested that U.S. forces partnered with the Kurds in northern Syria could be targeted by the Turkish military.

Mattis said he has been talking with his Turkish counterparts while in Europe and that some progress has been made. But he acknowledged “there are areas of uncommon ground.”