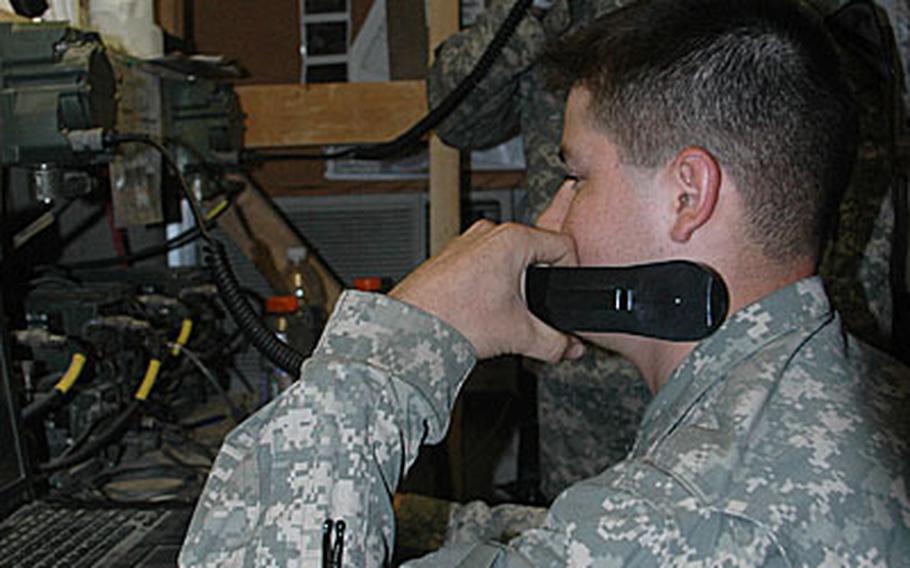 At the platoon&#39;s Paladin howitzer fire center, Pfc. Fernely Villatoro, 20, of Bakersfield, Calif., foreground, and Spc. Daniel Villareal, 25, a native of Asherton, Texas, communicate with the gun&#39;s operators, who are at another location. (Les Neuhaus / S&S)

At the platoon&#39;s Paladin howitzer fire center, Pfc. Fernely Villatoro, 20, of Bakersfield, Calif., foreground, and Spc. Daniel Villareal, 25, a native of Asherton, Texas, communicate with the gun&#39;s operators, who are at another location. (Les Neuhaus / S&S) A side view of the 155 mm Paladin howitzer while in action at Forward Operating Base Falcon in southern Baghdad. (Les Neuhaus / S&S) One of the Paladins fires 155 mm shells at a location roughly 10 miles north to take out manufacturers and planters of roadside bombs. A flash of fire is seen just after the shell is launched. (Les Neuhaus / S&S) 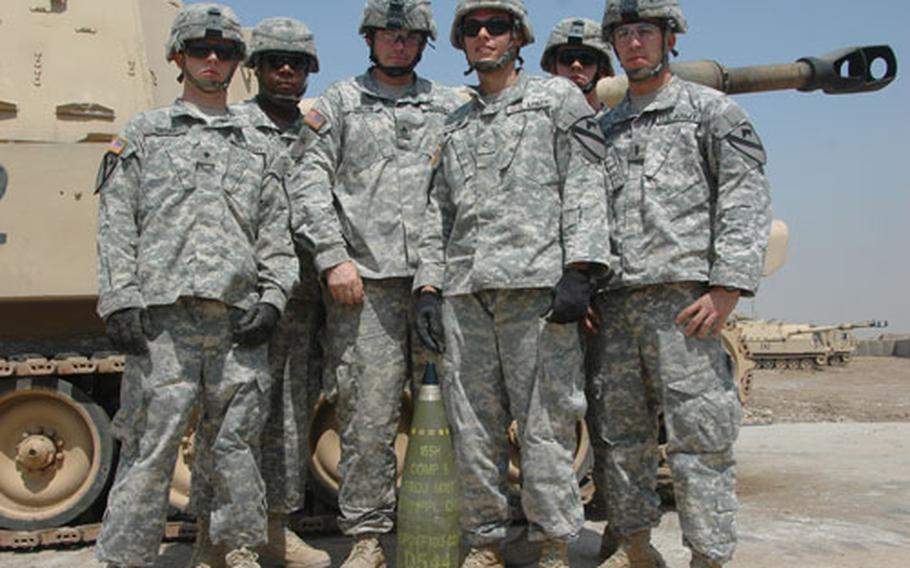 A Paladin crew stands in front of their gun and next to a 155 mm shell, the type fired by the howitzer. Accuracy is paramount in the soldiers&#39; duty, they said. From left to right are Spc. Zach Sharp, 22, of Columbus, Ga., Sgt. 1st Class Forte Cunningham, 35, from Prince George County, Va., Staff Sgt. Nathan Eidson, 28, a native of Bainbridge, Ga., Pfc. Luis Chacom, 27, from Zulia, Venezuela, Spc. Lance Robinson, 21, of San Angelo, Texas and 1st Lt. Joshua Riojas, 23, from El Paso, Texas. (Les Neuhaus / S&S)

BAGHDAD &#8212; It&#8217;s simple: If a round of artillery capable of flattening a house lands in the wrong place in a dense city, missing its target, innocent people can die.

U.S. Army Capt. Cruz Riviera, 38, the prior-enlisted commander of the 3rd Battalion, 82nd Field Artillery Regiment&#8217;s Battery B, said his men have a big responsibility when firing 155 mm shells throughout the Iraqi capital.

&#8220;Accuracy is everything, so our whole life revolves around math,&#8221; the League City, Texas, native said Saturday. &#8220;In supporting four brigades throughout Baghdad, we have to be proficient enough to deliver rounds in a timely and accurate manner.&#8221;

Out of a battalion of just more than 450 troops, only two platoons totaling roughly 20 men are able to use their artillery-firing skills on a daily basis, while the rest are outsourced, conducting convoy missions, patrols or security duties for U.S. State Department personnel.

The men in the unit take their job seriously. Having fired nearly 4,000 rounds into various sectors of Baghdad since deploying to Iraq in November 2006, being on target is the name of the game.

According to Riviera, nuances such as the weight of the shell, air density, muzzle velocity, time of flight and the amount of explosives charge being used are all considered when lobbing deadly munitions at insurgents.

When combat patrols call with an emergency and the coordinates to hit a rebel position from which U.S. troops are taking fire, all of those nuances have to be tallied up within seconds because soldiers might be pinned down.

Depending on the distance to target, a shell can hang in the air for up to one or two minutes, said 1st Lt. Joshua Riojas, the fire direction officer for the men firing the Paladins.

It&#8217;s a stunning claim the unit is able to boast, considering the many variables that go into targeting shells to land within a city populated by more than 7 million people.

The soldier said only one claim of damage had been made against the unit since its deployment to Iraq, but it turned out not to be substantiated by Army personnel investigating the matter.

He said there are many checks and approvals that go into the process before a single round leaves the barrel of the mammoth guns.

In the old days, pencil, paper, and even a compass were used to determine distance to target, leaving infantrymen waiting on the ground near the target crossing their fingers and hoping the shells landed on the enemy, and not on them.

&#8220;Now, automated systems and the improvements in our technology have reduced any computational errors,&#8221; Riviera said.

Most of the soldiers in today&#8217;s Army have never known that kind of archaic method. Their training is very different from that of their fathers&#8217; and grandfathers&#8217; generations in World War II, Vietnam or even Desert Storm.

Call for helpAt 5 a.m. Sunday at the platoon&#8217;s operations center, the phone rang.

Troops were engaged with insurgents about 10 miles south of the center&#8217;s location on the southern edges of Baghdad. The men fired off several illumination rounds, helping troops to see the insurgents&#8217; location.

Two more firing missions, with actual rounds, were ordered later in the morning. The next mission was at noon and another was scheduled for the early evening.

One of the 155 mm guns was already &#8220;hot,&#8221; or ready to go. The men began readying charges and shells, and going through their dry runs for the operation.

When they fired, the blast shook the entire base. But the men said testing the nerves and eardrums of those on base was worth it.

Their missions have reduced counterattacks, Riviera said, noting that having more troops on the ground over the past five to six months also has helped.

The target at noon was a tree line confirmed to be an explosives production and planting area.

Staying alertBut the men always have to worry about incoming mortar fire, a tactic favored by rebels in Iraq.

Spc. Zach Sharp, from Columbus, Ga., knows this all too well.

While deployed to Iraq in 2004 with the same platoon, he and the other artillerymen sustained 18 rounds in a mortar attack.

He said they didn&#8217;t even have time to set up and return fire, having just arrived at their location.

At Forward Operating Base Falcon, where the men of the Paladin platoons of the 3-82nd are posted, a mortar attack killed a soldier little more than two months ago. The men he was with were having lunch.

It wasn&#8217;t the first time the base had been attacked. The men of the Paladin crews take a certain pride in targeting insurgents who attack their own. They have fired off several thousand rounds already and they have another five months left in Iraq.