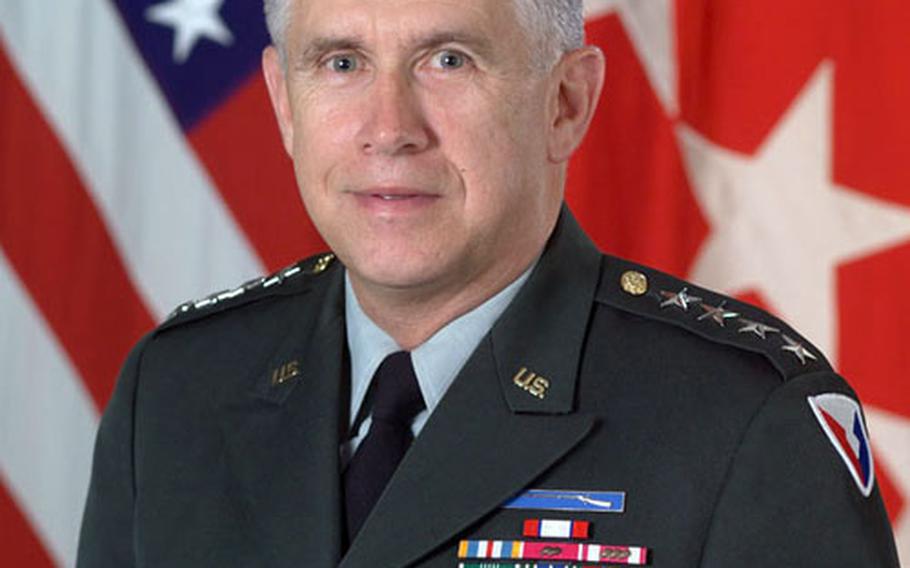 YONGSAN GARRISON, South Korea &#8212; If a soldier shoots it, wears it, drives it, flies it, programs it or builds it, then it&#8217;s a good bet Gen. Benjamin S. Griffin has had a say in the equipment supporting that work.

Griffin, who took over as the Army Materiel Command&#8217;s top officer in October, visited South Korea this week to talk with South Korean airline officials who help repair U.S. Army planes, talk with commanders in the 2nd Infantry Division about supplies and meet with U.S. Forces Korea leaders to talk about transformation.

The four-star general, who served on the peninsula in the 1970s, was Department of the Army deputy chief of staff for three years before taking his current command.

&#8220;I wanted to come back and talk firsthand to commanders,&#8221; he said during an interview Tuesday afternoon at the Hartwell House. &#8220;I see my job as a resourcer, to provide what is needed to the forces here on the peninsula. As we transform the Army, we need to get out in the field and hear firsthand from people on the peninsula.&#8221;

Griffin also toured the Maintenance Support Center Korea, a facility that uses a South Korean work force to fix U.S. tracked vehicles. Griffin said he wanted to learn more about how the two countries can work together to get equipment ready faster.

&#8220;We&#8217;re just trying to see how we can work more closely together and how we can speed up that process, with providing parts and sharing information,&#8221; he said.

A month after taking over as materiel commander, Griffin visited troops in Iraq, Kuwait and Afghanistan. This week&#8217;s trip to South Korea was his second fact-finding visit since assuming command.

Griffin and his staff wore the newest version of the Army&#8217;s battle dress uniform, a digitized camouflage pattern expected to be available to troops in South Korea next year.