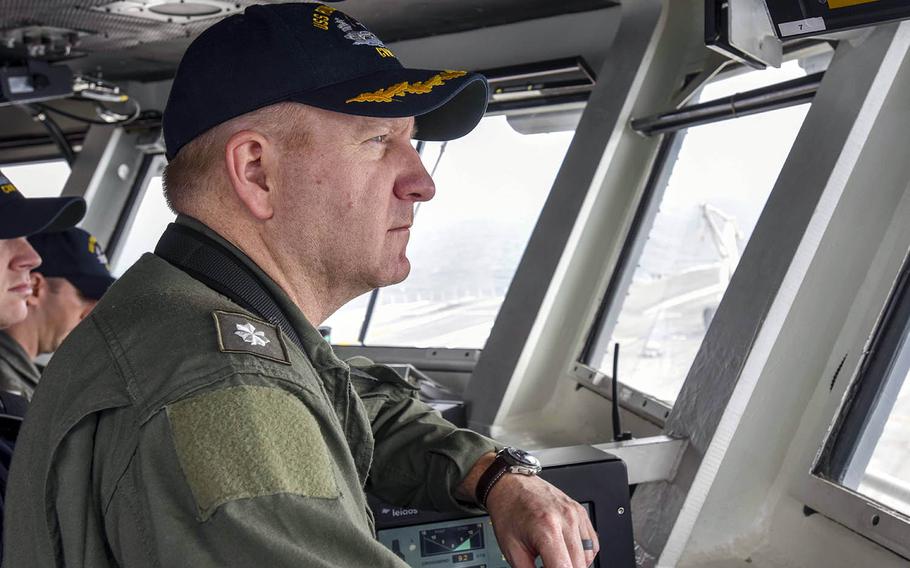 Cmdr. Stephen Weeks, navigator aboard the USS Ronald Reagan, monitors the aircraft carrier's course as it returns to Yokosuka Naval Base, Japan, after sea trials, Thursday, May 17, 2018. (MacAdam Weissman/U.S. Navy)

Cmdr. Stephen Weeks, navigator aboard the USS Ronald Reagan, monitors the aircraft carrier's course as it returns to Yokosuka Naval Base, Japan, after sea trials, Thursday, May 17, 2018. (MacAdam Weissman/U.S. Navy) 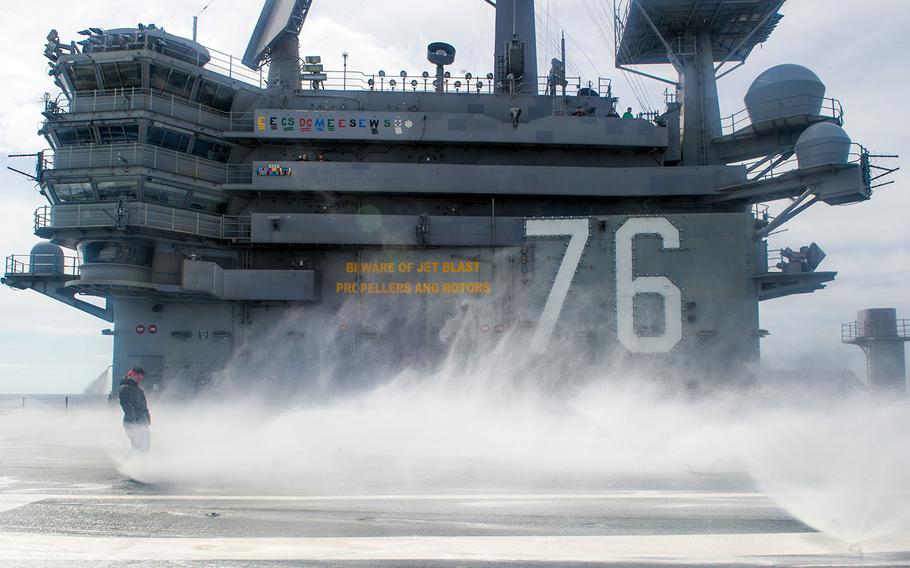 Sailors perform a countermeasure washdown on the flight deck of the aircraft carrier USS Ronald Reagan in waters south of Japan, May 12, 2018. (Kenneth Abbate/U.S. Navy)

YOKOSUKA NAVAL BASE, Japan – America’s only forward-deployed aircraft carrier’s upcoming deployment will be delayed because of a “material issue,” the Navy said Thursday.

The USS Ronald Reagan returned to its Yokosuka homeport Thursday after completing a week of pre-deployment sea trials. That same day, the service announced that carrier-landing practice would be delayed, partly to address an issue that arose on the ship over the past week.

“USS Ronald Reagan successfully completed Sea Trials on [Thursday]. However, during operational testing and verification of all systems during Sea Trials, a material issue was identified that requires repair,” said Lt. Cmdr. Matt Knight, a Task Force 70 spokesman. “The repair will result in a delay to the scheduled departure date for USS Ronald Reagan and Carrier Strike Group 5.”

Knight did not provide further details about the issue, including how long the delay was expected to last.

A separate Navy statement issued Thursday announced that carrier-landing drills for Carrier Air Wing 5 pilots were being delayed for “operational reasons.” The day-and-night training that enables them to meet qualifications was originally scheduled to take place May 3-13, mostly at Iwo Jima – a remote island known in Japan as Iwo To.

After the land-based training, the pilots were to conduct day and night landings on the Ronald Reagan, Knight told Stars and Stripes in an email last month.

The majority of the training is still expected to take place on Iwo Jima when new dates are announced, the Navy said.

“The crew’s training and preparation was a primary factor during all of the evolutions, and they should feel very good about the fact that they came in well-prepared and executed as well as they did,” he said in a Navy statement.