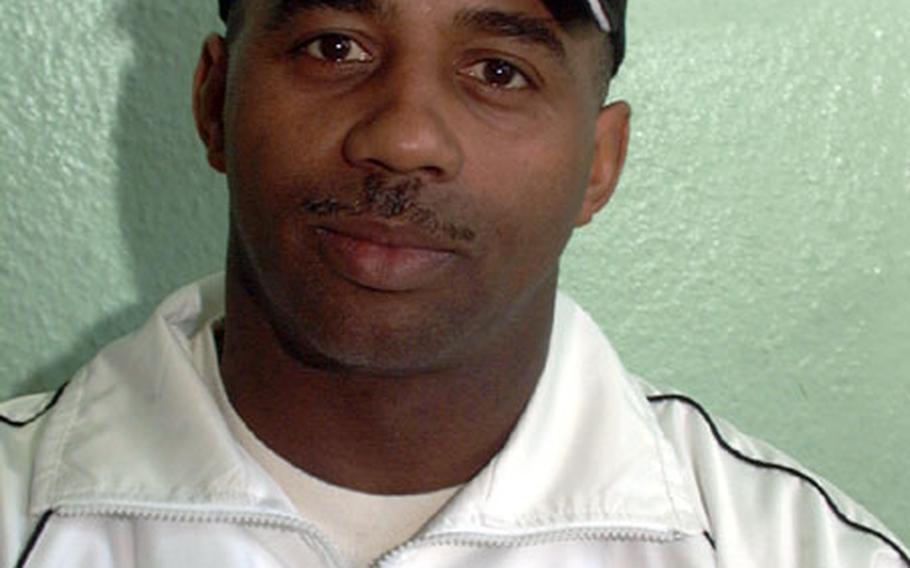 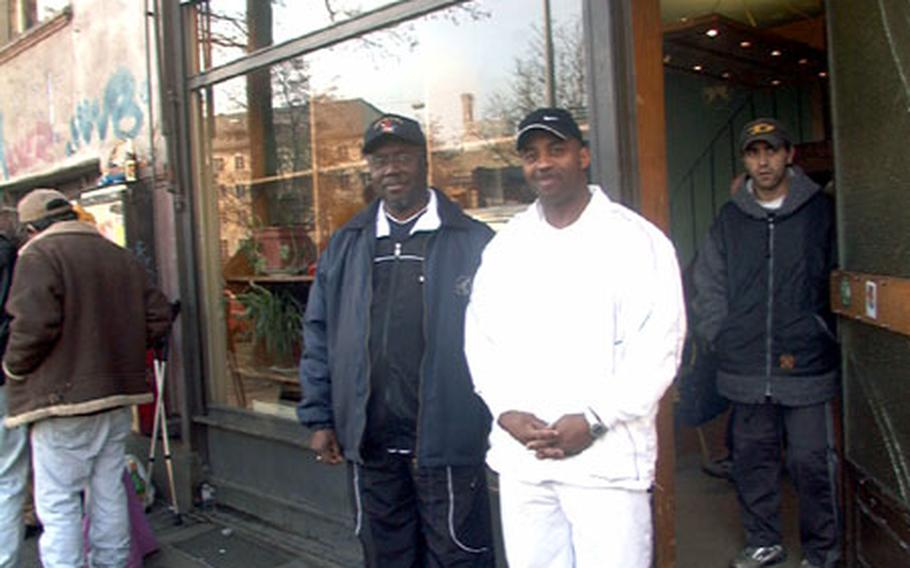 Army Master Sgt. Michael Walker (right) is a regular Friday volunteer at "Die Teestub," a food kitchen in Wiesbaden, Germany. Walker and other members of the New Hope Missionary Baptist Church, including its pastor, Joe Freeman (left), prepare "breakfast" for the needy. Usually, it&#39;s soup and sandwiches. A small homeless shelter adjoins the popular food kitchen. The experience, Walker said, "makes you appreciate who you are and where you come from." (Kevin Dougherty / S&S)

Down on their luck by fate or fault, the patrons, some who are homeless, waste little time falling into line. For many, it&#8217;ll be their only hot meal of the day, so second and third helpings are encouraged.

One of those at the head of the queue this chilly morning is Army Master Sgt. Michael Walker, a Friday regular. Only Walker isn&#8217;t there to receive, he&#8217;s there to give, though to him it&#8217;s probably a bit of both.

Walker and six other members of his church greet each person with a smile, then hand them a soup dish and spoon. A few ladles later, they step away carrying their bowl and some slices of bread in search of an open seat where they can quiet their stomachs.

Administering to those in need is everything to Walker, whether it&#8217;s a poor soul down on his luck or a young servicemember with some growing up to do.

An ordained Baptist minister, the 22-year Army veteran lives by a creed that could apply to anyone, rich or poor: Stay focused. Stay positive. Life may seem unfair at times, but Walker reminds people there are always others in our midst shouldering heavier loads.

Walker &#8220;is above reproach,&#8221; said Chief Warrant Officer William Scott, the maintenance officer for the 123rd Main Support Battalion in Dexheim. &#8220;He sets the standard as far as soldierly conduct and appearance.&#8221;

The 42-year-old Virginia native has been assigned to Germany for nearly four years, having spent time in Friedberg and Wiesbaden. Since July, he&#8217;s been the battalion&#8217;s maintenance chief.

Walker faces challenges of his own, mainly striking the proper balance between office, church and home.

As the battalion&#8217;s senior noncommissioned officer for maintenance, Walker oversees about 85 soldiers who are responsible for keeping the 1st Armored Division&#8217;s wheeled vehicles in good working order. It&#8217;s certainly not the most glamorous work, but Walker, Scott said, keeps his charges going while mentoring them in the process.

Walker&#8217;s wife, Zenobia, served 20 years in the Army. No sooner did she retire in summer of 1991 than their teenage daughter, Siobhan, enlisted in the Air Force. The airman is assigned to Little Rock Air Force Base, Ark.

Walker sometimes wonders whether he has shortchanged his family, given his duty to country and church. Zenobia may scold him from time to time, he said, but then she&#8217;ll hug the lug and encourage him to carry on.

That&#8217;s certainly been the case with the New Hope Missionary Baptist Church in Wiesbaden, where Walker serves as assistant pastor. The gamut of work ranges from the weekly Bible study class to assisting one of the other seven American congregations affiliated with the National Baptist Church.

On Sundays, he and Joe Freeman, the pastor of his church, conduct the regular worship service in Wiesbaden and then hit the road together to visit either Bamberg or Sembach Air Base, where another congregation awaits them. Walker usually doesn&#8217;t return home until early evening.

Last fall, Walker and Freeman began soliciting volunteers from the church to help them serve breakfast to the needy at &#8220;Die Teestube,&#8221; a food kitchen in Wiesbaden. The menu often consists of sandwiches and soup, but once a month the volunteers prepare a traditional American breakfast. Over the course of a few hours, the church group will serve 100 or more people.

One of the patrons who did talk was Stefan Becht, a 39-year-old man who worked for the U.S. military for five years as a security guard in the 1980s. Becht said he left the job on good terms, but then misfortune struck a couple of years ago and he eventually became homeless. Becht now has a home and steady work, but he needs a free meal here and there to make ends meet.

Becht appreciates the kindness of Walker and the others, saying contact with the Americans is good for the soul as well as the stomach.