Master sergeant works at adding heft to Humvees in Iraq 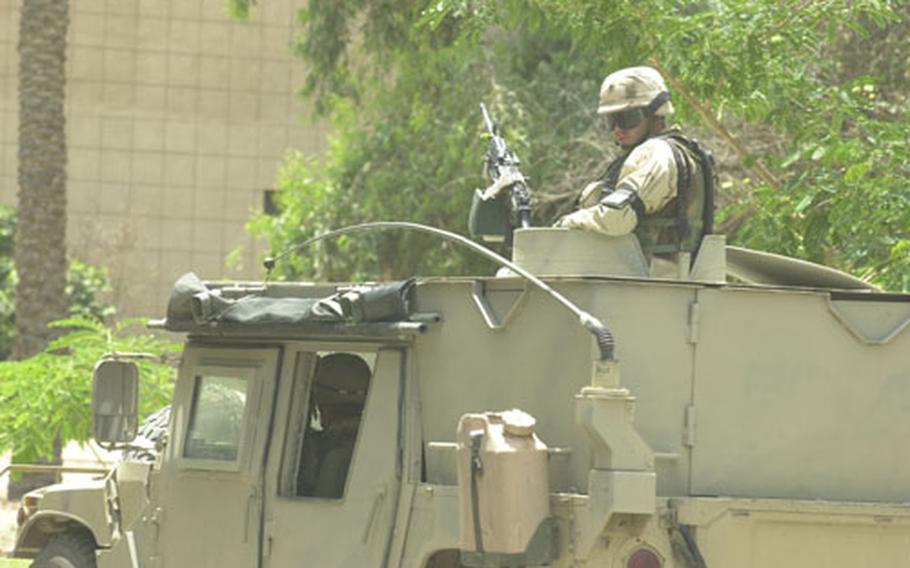 Soldiers suggested to Master Sgt. Dennis P. Lichtenberg that gunners should have a turret to protect them, and Lichtenberg even added a hatch to their Humvees. (Terry Boyd / S&S)

Soldiers suggested to Master Sgt. Dennis P. Lichtenberg that gunners should have a turret to protect them, and Lichtenberg even added a hatch to their Humvees. (Terry Boyd / S&S) 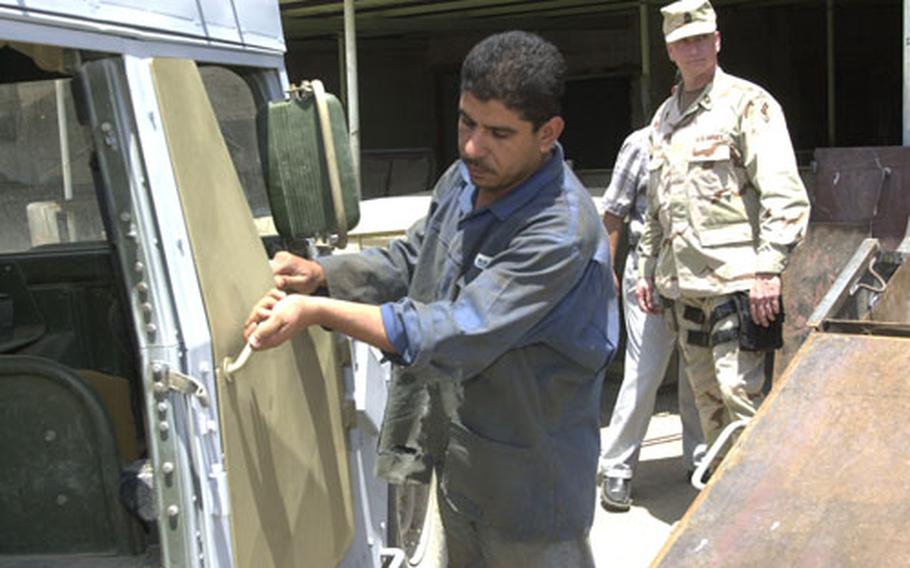 Master Sgt. Dennis Lichtenberg is always tweaking Lick Kit designs with assistance from an Iraqi steel fabricator on the grounds of the Green Zone. A worker fits a new door — with angled steel plates on the exterior — on a Humvee. (Terry Boyd / S&S) 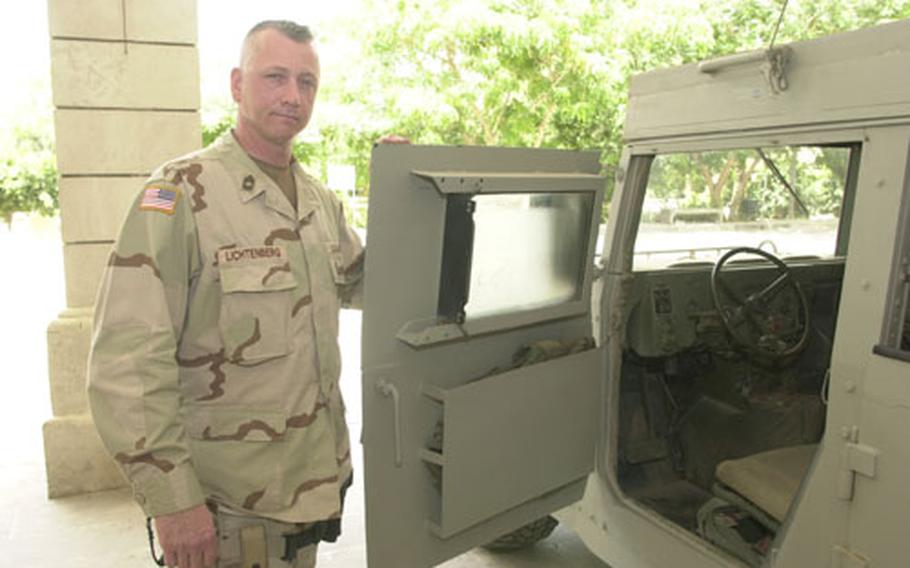 Master Sgt. Dennis Lichtenberg shows the inside of the "bullet box" on the driver&#39;s side door of one of his specially modified Humvees. Note the old schrapnel vest Lichtenberg inserted, one more energy-absorbing measure between the exterior and interior steel plate. (Terry Boyd / S&S) 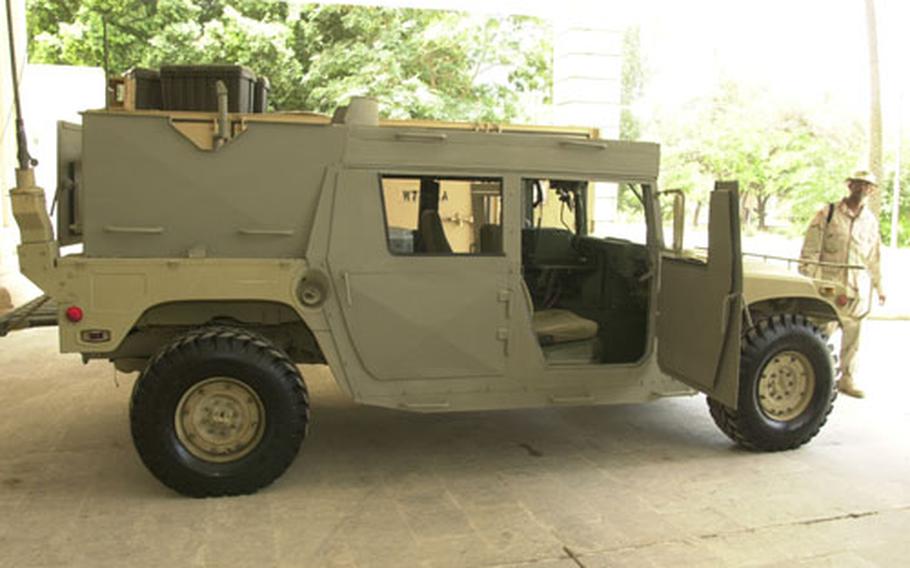 Lick Kits add steel plates to nearly every section of an unarmored scout Humvee, making the vehicle look more robust. That&#39;s important, say soldiers, because the harder the vehicle looks, the less likely insurgents are to single it out for attack. (Terry Boyd / S&S)

BAGHDAD &#8212; The ideal, soldiers say, is that no one in Iraq should have to go outside the wire in anything less than M-1114 factory up-armored Humvee.

The reality is, little more than 20 percent of Humvees in Iraq are armored, and some soldiers trust their survival to a few sandbags and steel sheets.

Until the ideal is attainable, Master Sgt. Dennis P. Lichtenberg is striving to create the best-protected Humvees short of an M-1114.

His inspiration for the Lick Kit was the Feb. 16 roadside-bomb death of Spc. Nicole M. Frye, 19, who was on convoy-escort duty with the 415th Civil Affairs Command.

Since her death in an unarmored Humvee, Lichtenberg &#8212; the 350th CA force-protection noncommissioned officer in charge &#8212; has been tweaking a whole array of designs to give his soldiers a fighting chance on convoy escorts.

Lick Kits are built around a unique system of multiple energy absorption techniques that even incorporate old flak jackets that Lichtenberg brought to Iraq from his job as a deputy-sheriff with Broward County, Fla., sheriff&#8217;s department.

The slowed, mushroomed round then stops after hitting the second plate.

And to make sure the round stays in the bullet box, Lichtenberg puts the flak jacket inside the gap between the two.

To test his design, Lichtenberg fired an AK-47 at it from 25 yards, and it stopped the round.

Moreover, it stopped rounds from M-16s, which have greater penetration, he said.

It&#8217;s often the secondary crash after the driver loses control that kills the rest of the crew, or disorients them so they can&#8217;t return fire, Lichtenberg said.

In addition to the bullet boxes, drivers get a ballistic glass window.

Other passenger doors get the bullet boxes, but not the glass in order to allow a wide-open field of fire.

Any unit with even a few thousand dollars in force-protection funds can duplicate his designs, Lichtenberg said.

Near his headquarters in the Green Zone, workers at an Iraqi fabrication business are building more kits under the supervision of manager Qhasan Murad.

The kits are always evolving, Lichtenberg added, and he jokes that it&#8217;s &#8220;German engineering at its finest,&#8221; alluding to his German ancestry.

He credits his father, Louis Lichtenberg, a retired Chrysler Corp. mechanic in Minneapolis, Minn., for teaching him how to shape steel to his needs.

Some of the early ideas were awful, specifically drop-down doors, Lichtenberg said.

In theory, the doors would be easy-in, easy-out. But the weight made them too heavy to pull up.

Many of the best ideas and modifications came from soldiers, and Lichtenberg&#8217;s operation is something of a custom-design shop.

Spc. Jason Copeland, 20, a reservists from Pensecola, Fla., said he suggested steel curtains on the rear of passenger windows to protect the face and neck of soldiers the sitting position, yet allow them to fire out the windows.

And his truck &#8212; which has since been handed off &#8212; had diamond-patterned steel in the rear bed for surer footing.

Steel floor plates slightly angled to the rear give soldiers a better chance of kicking grenades out of the vehicle.

Bullet box plates are concave for additional space, and to redirect rounds.

Lichtenberg says he and other soldiers have new ideas every day, including using rebar to build an exterior grid that would detonate rocket-propelled grenades before they penetrate Humvee doors.

The current modifications make Humvees look like a cross between a Brinks armored car and a Humvee &#8212; and the robustness is no small factor, soldiers say.

Other soldiers aren&#8217;t as enthusiastic, though all interviewed said Lick Kits are far better than what they had &#8212; nothing.

He added that he&#8217;s confident the armor will withstand a small arms attack.

But big questions remain about how well Lick Kits will protect against bombs and rocket-propelled grenades, Carter said.