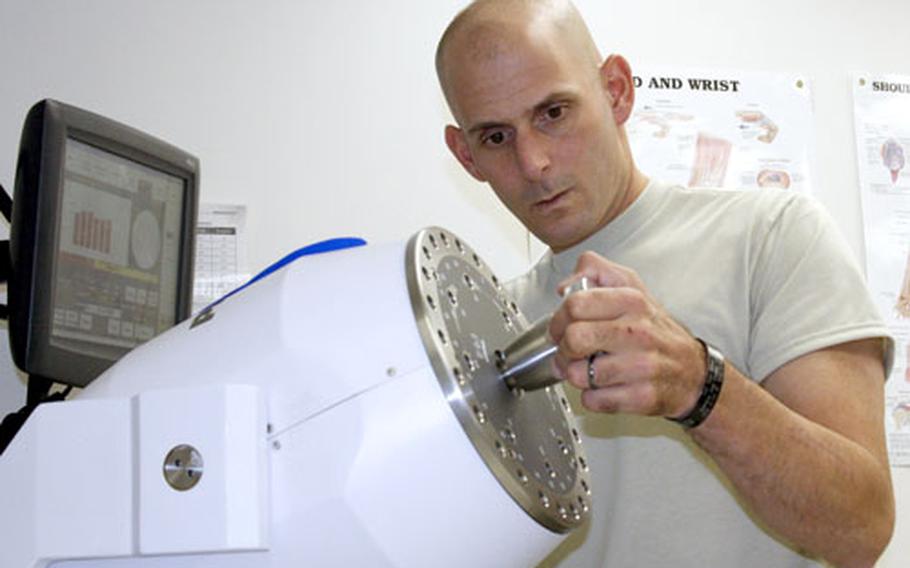 The blast slammed Company B&rsquo;s first sergeant to the ground.

Pain seared him. Blood spilled from his body. He looked over and saw one of his young staff sergeants, dead and gone.

Rick Haddad, a New Englander and former Marine who had led 135 men for nearly a year near Kirkuk, Iraq, who loved his job and believed in his mission, was about to bleed to death.

"I was sad," he said. "I asked my medic if I was going to die about 10 times. He said, &lsquo;No, you&rsquo;re not going to die. Keep your eyes open.&rsquo; He actually told me to shut up."

Haddad&rsquo;s injuries were the worst of all but one of the 19 soldiers hit by the explosion at their combat outpost just before 2 p.m. on June 8.

The 2,000-pound truck bomb exploded inside the gate at Patrol Base Bushmaster. It was the worst event in the unit&rsquo;s 14-months in Iraq, and it left the wife of Staff Sgt. Tyler Pickett a widow.

But Haddad lived and became among the first of his unit to come home. It wasn&rsquo;t how anyone would have wanted it to be.

There were no victory speeches or joyous ceremonies in the gym on Fort Drum in New York He couldn&rsquo;t even pick up his life where he had left it.

There was fear, at first, that he still might die or be among the war&rsquo;s amputees. There was sorrow as Haddad, 40, his wife, and their two adolescent daughters reckoned with his new reality &mdash; a severely damaged body and its emotional impact &mdash; and tried to figure out how to go on.

"It killed me inside to see my family that first time," Haddad said. "I&rsquo;ve been with my wife for 17 years. &hellip; That was the first time in my life I needed her to take care of me.

"I was at the top of my food chain, in charge of 135 guys. And then the next day, you&rsquo;re learning to wipe your butt."

Rick and his wife, April, had become all that an Army family could be: solid, smooth, a model of teamwork. He had rank and respect; she presided over a serene household whether he was home or away. But then he was nearly killed in combat. And a whole new life opened frighteningly before them.

April read a brief report on Yahoo news that 18 people had been injured on a patrol base near Kirkuk. It was about 3 p.m, her time, that June 8.

April, 38, had sailed through previous deployments, never resenting her husband&rsquo;s absence, she said, always being proud of him and able to handle things on her own.

That afternoon, "I had a really bad feeling," she said. "But I always think of my husband as invincible, so I wasn&rsquo;t expecting he was hurt."

She called the rear detachment commander. He told her that Rick had been seriously injured. He told her not to tell any of the other wives.

"I was crying," she said. "The kids were inside &mdash; I didn&rsquo;t want them to see me like that. Then I just got angry. I thought, &lsquo;If anything happens to him &hellip; &rsquo;

She spent a couple hours on the phone outside, tried to collect herself and went in and told her girls. Family members arrived that night.

"We were just sitting around, waiting for the phone to ring," she said.

Rick first felt he had returned home as he was being wheeled into Walter Reed Army Medical Center in Washington. Thirty or 40 people from the hospital staff had gathered to greet the wounded troops arriving from Landstuhl Regional Medical Genter in Germany, clapping and welcoming them.

His wife arrived from Fort Drum the next day.

&ldquo;I wouldn&rsquo;t let her bring the kids until 10 days later. I was not going to let them see me until I could sit up,&rdquo; Rick said. &ldquo;You never have your kids standing over you.&rdquo;

April looked at him in the hospital bed. He was groggy, on a lot of pain meds. But he was there.

&ldquo;I didn&rsquo;t have time to prep myself,&rdquo; she said. &ldquo;I thought I was going to cry. I was so happy, and the moment I saw him all the stress went away. Just seeing his face did it for me.&rdquo;

The shrapnel that shot into Rick near the end of what was his third deployment ripped apart muscle, sliced through arteries and severed nerves throughout the left side of his body. They were devastating injuries, made worse by the fact that Rick is left-handed.

He was at Walter Reed nearly three months and exceeded expectations for his recovery.

&ldquo;The self-pity part &hellip; if you wallow in that, you&rsquo;ll never get better,&rdquo; he said. &ldquo;I jailbroke that place.&rsquo;&rsquo;

Doctors had considered amputating his left limbs but in the end, Rick kept them, though they no longer work as they once did.

He can&rsquo;t open a jar now.

Nerve tremors run through him every few minutes.

He can&rsquo;t walk more than a few steps without pain. He has a cane. He doesn&rsquo;t like it.

&ldquo;I&rsquo;m an athletic person. It was difficult to give that up,&rdquo; he said. &ldquo;I just drag my leg around. My foot swells up, I can&rsquo;t feel my toes. On a pain scale of one to 10, I&rsquo;m a two or three all the time. I just block it out.&rdquo;

When he first got home, April said, &ldquo;The kids and I would baby him. I would constantly be, &lsquo;Do you want me to do that?&rsquo; He didn&rsquo;t like that too much.&rdquo;

&ldquo;We have a rule in our house now: If I need help, I&rsquo;ll ask for it,&rdquo; Rick said.

He mows the lawn one-handed now. To rake leaves, he tapes the rake to his hand.

&ldquo;I&rsquo;ll be honest: I hate writing now. I hate typing now,&rdquo; he said.

&ldquo;I don&rsquo;t like to look at my scars. It&rsquo;s not the same when I take off my shirt, and I&rsquo;m not a vain person. There are hundreds of reminders in your house every day.&rdquo;

His wife understands his feelings but doesn&rsquo;t share them at all, she said.

&ldquo;Mentally, he&rsquo;s still the same,&rdquo; she said. &ldquo;That&rsquo;s the most important thing to me. The physical &mdash; that means nothing to me.&rdquo;

Rick does physical therapy every morning at 7, then heads to his office on Fort Drum. He&rsquo;s in charge of the Soldier Family Assistance Center, where he spends five hours a day working with the 500 soldiers assigned to the base Warrior Transition Unit.

At first, he had a hard time putting on his uniform.

&ldquo;It feels better than wearing first sergeant rank. I have so much respect for that position,&rdquo; he said. &ldquo;It&rsquo;s so deep and personal, the things we know about [soldiers&rsquo;] lives. Wives have issues when you&rsquo;re gone. People die. I was the one that gave them their Red Cross messages. I gave 30 of them.&rdquo;

He&rsquo;s been able to put things in perspective.

&ldquo;There&rsquo;s worse off than me,&rdquo; he said. &ldquo;I want that to be clear. Everything I have, the Army is the foundation.&rdquo;

Rick and April have known each other since their high school years in Maine, and both say their marriage has always been solid.

&ldquo;We both committed to something,&rdquo; Rick said. &ldquo;We were going to drive this train for up to 20 years. Every time I re-enlisted I said, &lsquo;Are you in or out?&rsquo;&thinsp;&rdquo;

For her part, April said, &ldquo;We have a mutual respect. He&rsquo;s my buddy. There&rsquo;s no hiding anything.

&ldquo;It&rsquo;s not the type of relationship where we have to ask. Only one time I said, &lsquo;Please don&rsquo;t do that&rsquo; &mdash; Special Forces. I said I&rsquo;ve never asked you not to do anything. And he said, &lsquo;That&rsquo;s fine.&rsquo;&thinsp;&rdquo;

It was only after his injuries, Rick said, that he noticed certain important things. For instance, all these years, he said, &ldquo;April constantly has had to make adjustments for me. It&rsquo;s so obvious to me now.&rdquo;

And he thinks about the way his career gave him things but also took things away.

&ldquo;Do you know how much stuff you miss in a year? It&rsquo;s ridiculous,&rdquo; he said. &ldquo;Both my girls &mdash; you come back, and they&rsquo;re young women. You wish you got to see it gradually.&rdquo;

&ldquo;I say, &lsquo;Maybe it&rsquo;s time for you to slow down once in your life. Maybe that was the reason.&rsquo;&thinsp;&rdquo;

In October, 2008, Master Sgt. Rick Haddad talks about his injuries and the path to recovery as he does his daily therapy at Fort Drum's Guthrie Ambulatory Health Care Clinic.