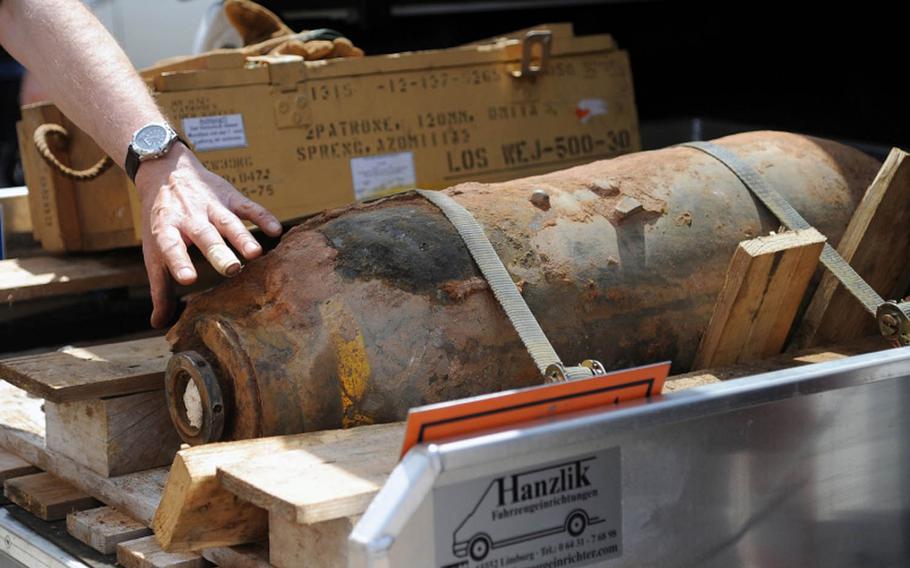 This 250-pound American World War II bomb was unearthed in May 2012 at a Kaiserslautern, Germany, construction site, prompting the evacuation of thousands of residents. Massive traffic backups are expected in Okinawa, Japan, Sunday, May 15, 2016, because of road closures related to the removal of unexploded World War II ordnance. (Michael Abrams/Stars and Stripes)

CAMP FOSTER, Okinawa — Massive traffic backups are expected on Okinawa’s main artery over the weekend due to road closures related to the removal of an unexploded 5-inch shell from World War II.

The Makiminato section of Highway 58 near Camp Kinser will be closed between 9:45 a.m. and noon Sunday, or until the disposal is completed, said a spokesman from Urasoe City’s disaster prevention and crisis management office.

The shell was fired from an American warship during the Battle of Okinawa in early 1945. Found at a construction site near the roadway, it will be handled by a bomb-disposal team from the 101st Unexploded Ordnance Disposal Squad of the 15th Brigade Okinawa of Japan’s Ground Self-Defense Force.

Residents and workers from 206 households and 39 businesses must evacuate during the disposal process.

The end to the closures and evacuations will be marked by a loud horn lasting for 30 seconds.

Since Okinawa was reverted to Japanese control in 1972, the 101st Unexploded Ordinance Disposal Squad has responded to 35,699 ordnance-related cases as of May 2 and disposed of approximately 1,742 tons of World War II-era munitions, according to the brigade’s website.