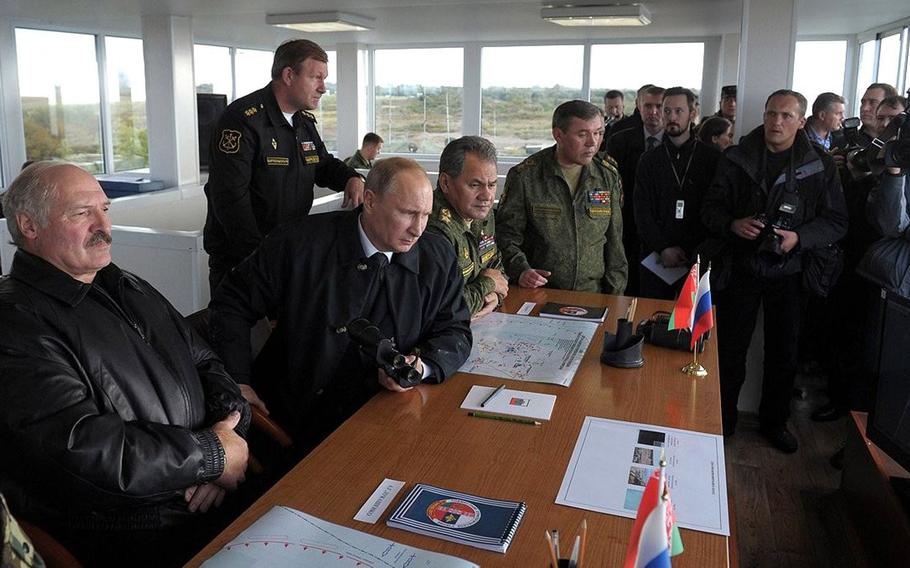 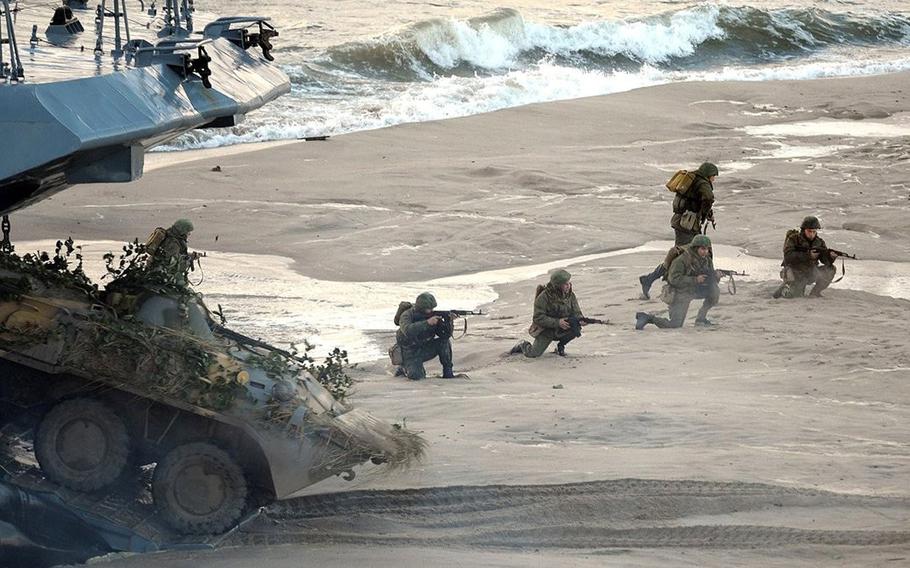 Troops come ashore during the Zapad Russian-Belarusian exercises at the Khmelyovka test ground, Russia, in September 2013. (Courtesy of the Kremlin) 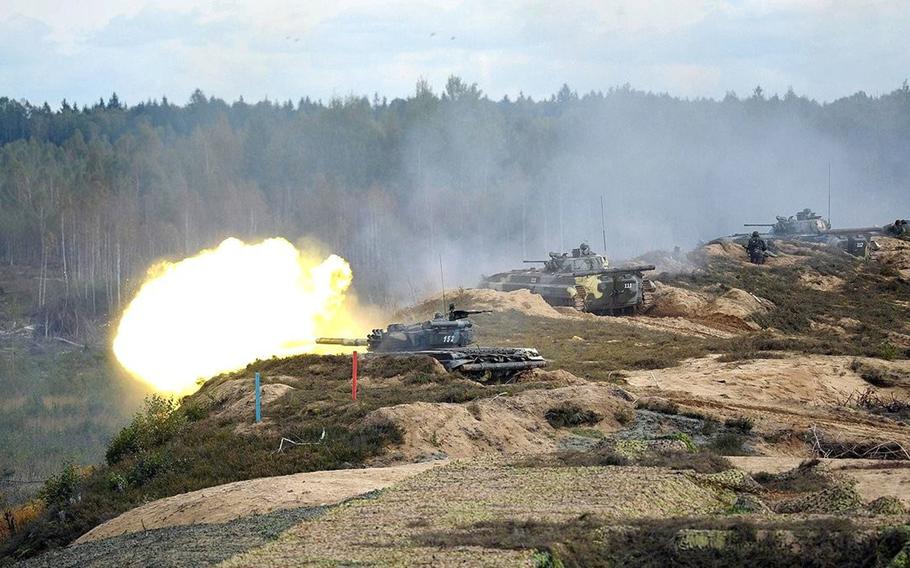 Tanks fire at the Gozhsky test ground during the Zapad Russian-Belarusian exercises in Belarus in Sept. 2013. (Courtesy of the Kremlin) 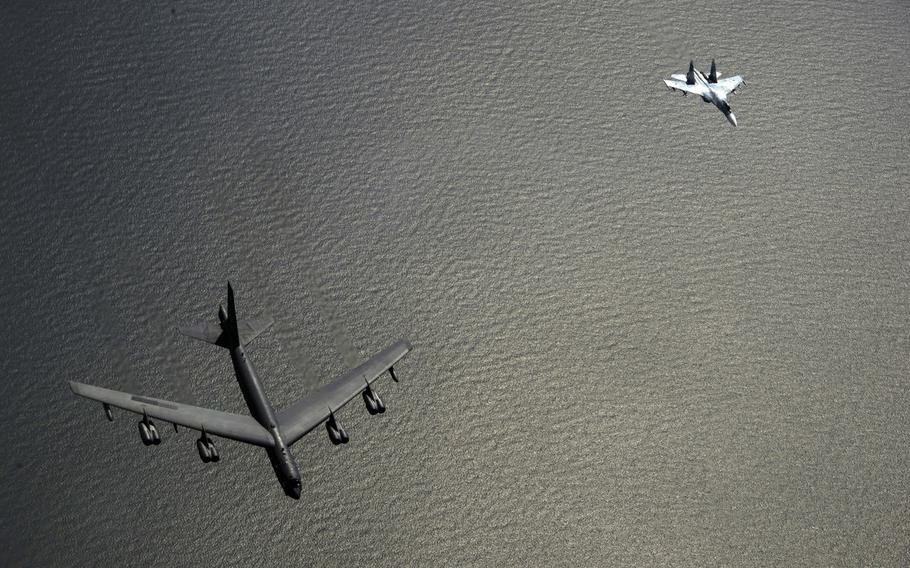 A Russian Su-27 Flanker intercepts a U.S. Air Force B-52H in the middle of the NATO-run BALTOPS exercise over the Baltic Sea, June 9, 2017. Tens of thousands of troops will be on the move next month as Russian and Western forces launch some of their largest drills in years. (Jonathan Snyder/U.S. Air Force) 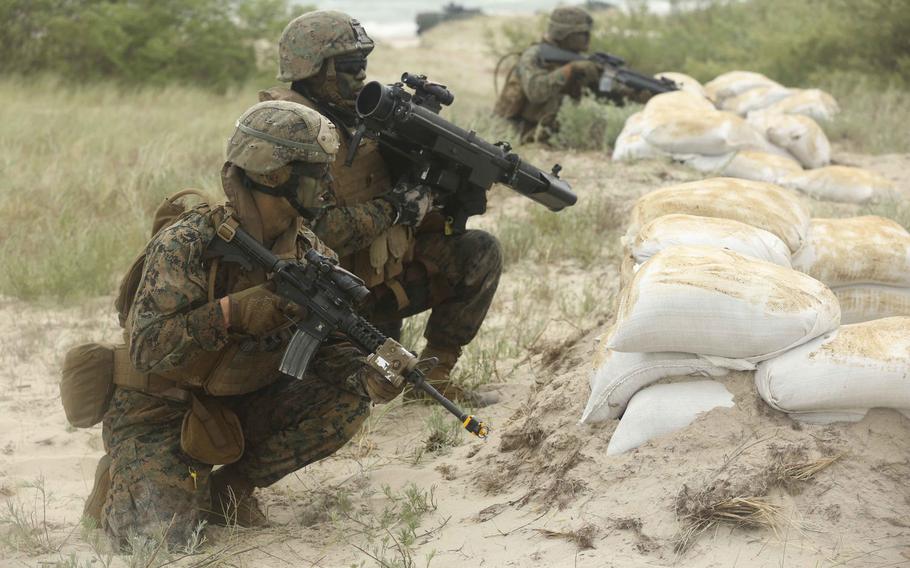 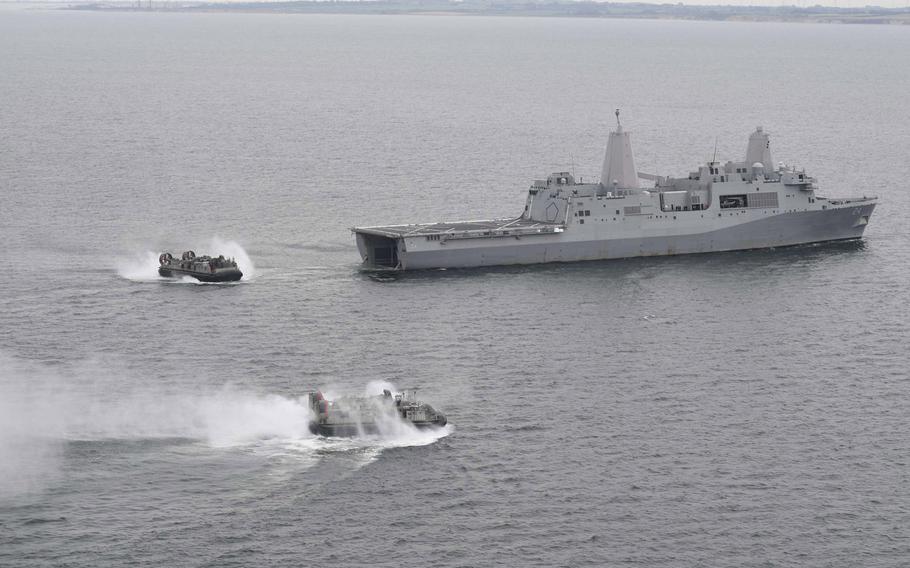 STUTTGART, Germany — Tens of thousands of troops will be on the move next month in Europe in a burst of Cold War-style war gaming as Russian and Western forces launch some of their largest drills in years, raising suspicions between old adversaries and sparking concerns about potential military miscalculation.

From Ukraine and Sweden to the Baltics, Kaliningrad and Belarus, troops will be maneuvering on both sides of the line that divides Russia from NATO and its partners.

“So it will be getting crowded, especially in the Baltic Sea area,” said Lukasz Kulesa, a security analyst with the European Leadership Network’s Warsaw office. “Plus, we will be watching each other’s exercises ... so there’s always a risk of an incident or accident.”

The flurry of war games, combined with more NATO and Russian forces based near possible flashpoints, highlights the changed security environment in Europe since Russia invaded Ukraine in 2014.

The main movements take place mostly in Belarus, but it’s suspected they will coincide with exercises stretching from Moscow’s fortified enclave of Kaliningrad back into contiguous Russia.

Every few years, Moscow moves forces into Belarus for Zapad, the Olympics of Russian war games, which traditionally has focused on rivals in the West. The 2013 iteration involved some 90,000 troops in one of the largest Russian exercises since the collapse of the Soviet Union.

Russia has since annexed Ukraine’s Crimean Peninsula, supported separatists in that country’s east and launched an intervention in Syria that propped up its ally, Bashar Assad.

Historically, Zapad has given Russian forces a chance to test new equipment and tactics, whether perfecting a tank invasion into NATO territory during the Cold War or doing dress rehearsals for more recent operations, such as the Ukraine invasion or the 2008 war with Georgia.

NATO has intensified its operations since the Ukraine invasion, particularly along the eastern flank in deployments the alliance previously avoided for fear of provoking Russia.

The U.S. and its allies are moving forward with their own ambitious set of exercises. In September, the Army will kick off Rapid Trident, a long-planned exercise in western Ukraine involving 10 nations. In the Baltics, the 173rd Airborne Brigade will deploy 600 troops for the duration of Zapad, conducting drills and keeping watch.

In Sweden, about 20,000 troops will assemble in September. A U.S. Patriot battery and a National Guard tank unit are expected to join them.

Kulesa said that while chances of conflict remain remote, there are risks connected to the heightened activity.

“It is a big change from 2009, 2010, when NATO allies were pressuring not to have any contingency plans for the Baltics, let alone any troop presence,” said former Estonian President Toomas Ilves, an advocate for a more robust NATO presence in the region.

Yet deterring Russian aggression without provoking it requires a delicate balance. Some analysts warn that large war games raise the risks of miscalculations.

“I worry about the role that exercises such as Zapad play in fueling the action-reaction cycle of Russia-West confrontation,” Kulesa said. “If the Zapad scenario includes sending rapidly massive airborne and tank units to Belarus, or conducing precision strikes with weapons capable of carrying nuclear warheads, then of course this will make (it) more likely that NATO will tailor its defenses accordingly.”

Meanwhile, Russia has moved some of its readiest units near the Baltics in recent years.

Russia has 22 battalions in its Western Military District, 13 of which are tank, wheeled or mechanized infantry units, according to the Carnegie Endowment for International Peace. The Baltic states combined have 11 infantry battalions and no heavy armor units.

NATO has moved to close the gap, adding reinforced battalions in all three Baltic countries and Poland, where a U.S. Stryker squadron is positioned.

“Let’s face it, a (NATO) battalion in each country is more of a trip wire,” Ilves said. ”But the troop levels — I think it is appropriate. It does show there is a commitment on the part of NATO (while) at the same time, a battalion doesn’t represent a threat to anybody.”

Russia maintains a decided advantage in firepower, with 10 artillery battalions in the Baltic region. It also has five surface-to-surface missile battalions.

Russia also keeps 27 combat air squadrons in its Western Military District and six battalions of assault helicopters, which NATO would have to scramble to match in a crisis.

The firepower advantage, coupled with an anticipated surge in forces for upcoming war games, has NATO’s attention.

“It is a muscle-flexing exercise. On the other hand, I really don’t think Russia would risk doing anything more than that,” Ilves said. “I think it is a case of psychological pressure.”

Allies worry that Russia could use the Zapad drills to leave a large residual force in Belarus, which would pose a threat to Poland and Lithuania. Moscow has dismissed such suspicions as Western hysteria.

Some analysts think it is unlikely that Russia will seek to leave behind a major force in Belarus, given the country’s desire to strengthen economic ties with the West.

“The Belarusians are not so keen on getting into bed with them (the Russians),” said Pal Dunay, a security expert at the George C. Marshall European Center for Security Studies. “Belarusians are being fully transparent and really don’t want to be in a situation where they are put in a bad light.”