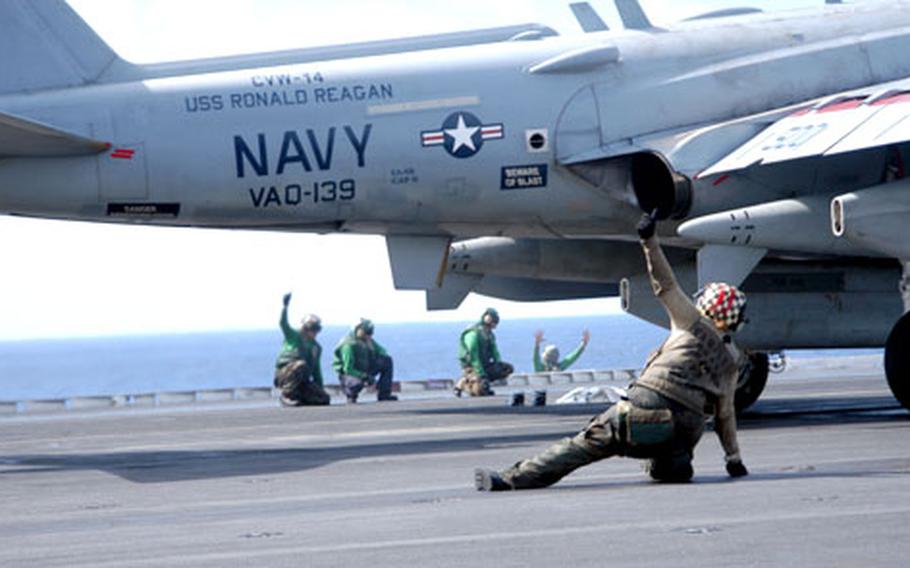 Sailors signal a fighter jet on the deck of the USS Ronald Reagan on Monday during the Valiant Shield exercise. (Allison Batdorff / S&S)

ABOARD THE USS RONALD REAGAN, at sea near Guam &#8212; Rear Adm. Michael Miller beheld a &#8220;massive armada&#8221; when the U.S. forces involved in Valiant Shield got together for a photo exercise Sunday, he said.

The exercise&#8217;s size, Miller said, is a function of all of the carrier groups being in the vicinity at the right time. He said mustering the massive Valiant Shield forces &#8212; and expanding the former JASEX exercise from two to three carriers &#8212; is not being done to show U.S. military might in the Pacific.

Rather, he said, the Navy is reaching out to the region through military &#8220;transparency.&#8221; For instance, China &#8212; called a potential threat in a recent Pentagon report &#8212; was invited to attend; on Sunday, Chinese representatives came aboard the Ronald Reagan.

&#8220;We had some forthright discussion. These are small steps but they are important to building bridges between our two countries.&#8221;

The Chinese were &#8220;interested in the carrier from the bottom up,&#8221; said Ronald Reagan commanding officer Capt. Terry B. Kraft.

Military representatives from Australia, Singapore, South Korea, India, the Philippines and other nations were aboard carriers Kitty Hawk and the Abraham Lincoln, he said.

The inaugural five-day exercise is to run through Friday; Valiant Shield is to become a biannual event.