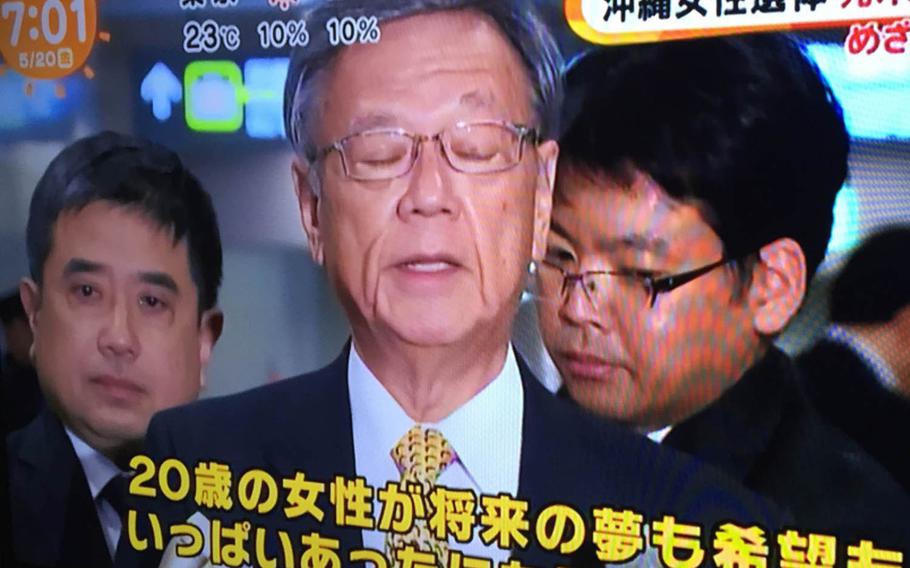 In this image taken from a Fuji Television broadcast, Okinawa Gov. Takeshi Onaga speaks to Japanese reporters about the death of an Okinawa woman, Friday, May 20, 2016. The staunchly anti-U.S. military governor will be among an estimated 50,000 people attending an island-wide demonstration against the U.S. military on Sunday in Naha. (Screenshot from Fuji Television)

CAMP FOSTER, Okinawa — Okinawa’s staunchly anti-U.S. military Gov. Takeshi Onaga will be among tens of thousands of people who are expected to attend a demonstration Sunday in the wake of a U.S. civilian base worker’s arrest in the death of a 20-year-old Japanese woman.

Servicemembers, family members and civilians with SOFA status are being encouraged to stay home and avoid the area except on official travel, Marines and Air Force officials said.

The purpose of the rally — slated for 2 p.m. at Naha’s Onoyama Athletic Stadium — is to condemn Rina Shimabukuro’s death, remember the victim and demand the withdrawal of Marines from Okinawa, where more than half of the U.S. troops in Japan are based, organizers said. It will feature a litany of speakers, including businessmen and leaders of activist groups that have stated their opposition to the U.S. military presence on island.

A spokesman for Onaga confirmed the governor will attend but did not say whether he would speak.

A protest resolution to be adopted at the rally will demand:

Complete withdrawal of Marines from Okinawa, closure of Marine Corps Air Station Futenma and abandonment of a plan to move Futenma’s operations to Henoko. Review of the status of forces agreement, which sets rules for handling criminal cases involving U.S. personnel. An apology and restitution to Shimabukuro’s family and the people of Okinawa. The Okinawa chapters of the ruling Liberal Democratic Party and the Komeito, each part of the national coalition government under Prime Minister Shinzo Abe, will not attend the rally, an LDP Okinawa spokesman said.

Kenneth Franklin Gadson, who goes by his Japanese wife’s family name of Shinzato, has been charged with illegally dumping Shimabukuro’s body, and police have recommended murder and rape charges.

That incident, along with others involving American servicemembers on the island, led to tightened alcohol and liberty restrictions for U.S. troops and tainted President Barack Obama’s historic visit to Japan last month where he became the first sitting U.S. leader to visit Hiroshima.