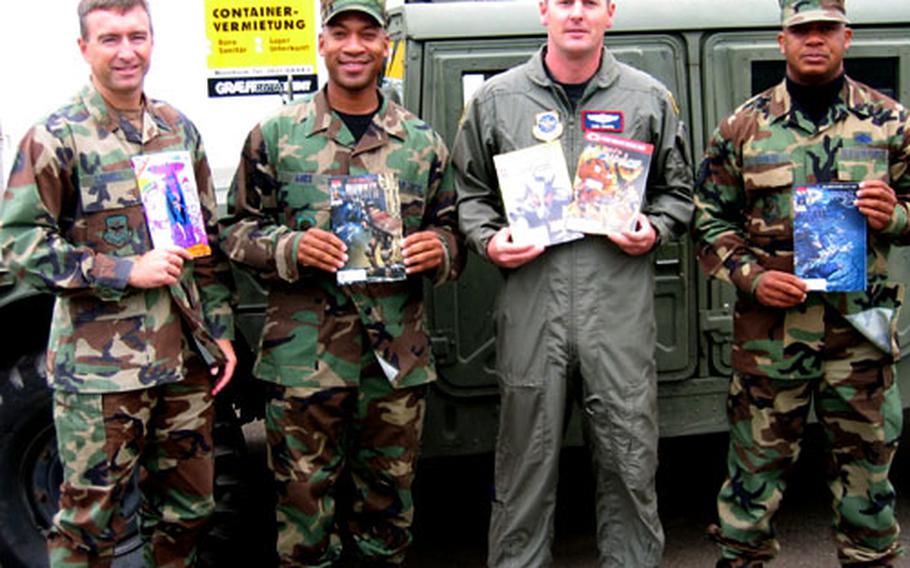 Courtesy to Stars and Stripes Operation Comix Relief founder Chris Tarbassian was friends with U.S. Air Force Capt. Tom Chafe, second from right, when Chafe was deployed to an undisclosed location in support of Operation Enduring Freedom. This photo was taken at Ramstein Air Base, Germany, where Chafe, a flight nurse, now is stationed. Others in the photo are not identified. (Photo courtesy to S&S)

WASHINGTON &#8212; It may not be as lofty as truth, justice and the American way, but Chris Tarbassian has swooped in to help people he&#8217;s never met.

The Framingham, Mass., native was in contact with a friend he met while both worked as trauma nurses at Brigham and Women&#8217;s Hospital in nearby Boston.

He wanted to help U.S. Air Force Capt. Tom Chafe, a flight nurse who deployed to Afghanistan as part of Operation Enduring Freedom. And he wanted to relieve the boredom and pain of the patients Chafe was helping.

So Tarbassian, 40, shipped his friend a package of comic books.

The size of the project exploded.

When word got out that he was willing to send comic books to servicemembers overseas, e-mails started pouring in from friends and family members of those deployed. Tarbassian launched Operation Comix Relief.

Tarbassian started making the rounds to comic book stores in his area, and talking with major distributors, such as DC Comics and Diamond Comic Distributors, who have donated to the cause.

It mushroomed so quickly that he soon needed a staff to run his Web site and write a newsletter, and he even drafted his nephews to help box things up.

In the months since he started shipping packages, Tarbassian has sent close to 400 boxes containing 4,000 comic books.

And the response is something Tarbassian said he&#8217;ll never forget. He&#8217;s getting invitations to family parties for returning servicemembers, as well as a lot of e-mails from the field thanking him for what he&#8217;s doing.

While he&#8217;s getting donations regularly, what really makes Tarbassian happy is getting addresses where he can send comics.

The U.S. military wants all packages addressed to a specific individual due to bioterrorism scares. Because of that, Tarbassian is getting the word out, asking for servicemen and servicewomen&#8217;s addresses so he can get the comics to them directly.

The senior Tarbassian is a Korean War veteran himself, having fought with the 2nd Infantry Division.

The operation&#8217;s impact is perhaps best summed up by one letter he received from an Army surgeon.

&#8220;Now that the direct fighting phase of this war has finished (tell that to the Baathists), it is nice to know that people at home are still thinking about us.&#8221;