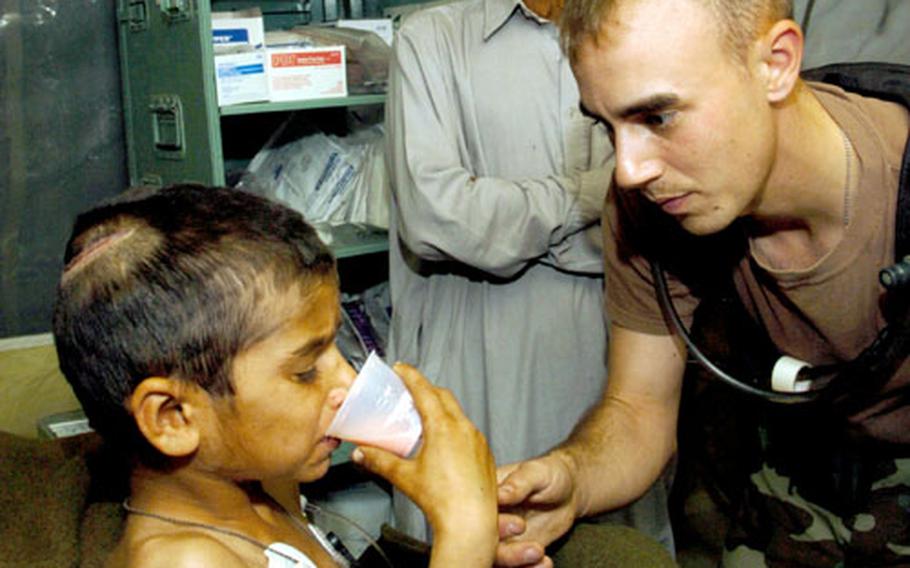 1st Lt. Tory Marcon helps Riaz Sharif drink the only food tetanus patients at the 212th MASH can manage to swallow because of muscle spasms: a powdered milkshake from the MREs. (Eric S. Powell / U.S. Navy)

MUZAFFARABAD, Pakistan &#8212; Until last month, Riaz Sharif was like any little boy living in the hills of Kashmir &#8212; skinny, poor, virtually unschooled and quite unprotected from a host of diseases.

The earthquake that killed and injured so many thousands of Pakistanis Oct. 8 spared his life and left his bones unbroken. But his head was gashed and a leg was cut, and although these were minor injuries, Riaz, soon became very sick. As his muscles went into painful spasms, he&#8217;d cry silently. His eyes would fill with pain and tears, but his mouth and jaws stayed clamped tightly shut.

Riaz, 6, was brought by his father to the 212th Mobile Army Surgical Hospital in Muzaffarabad, and became one of four children there to be treated for tetanus, a potentially fatal bacterial infection that affects the central nervous system and is almost unknown in the U.S.

By Thursday, at least 22 people in Pakistan had died of the disease, according to the World Health Organization, and it was thought to be one of the biggest threats in the coming days.

Also known as lockjaw, tetanus is caused by bacterium in the soil and animal waste that enters a break in the skin. Preventable through vaccine and extremely rare in the U.S., the disease is painful, progressive and often fatal.

All the MASH&#8217;s young patients were expected to recover within about two weeks, their progress noted by the lessening number of spasms and their ability to open their mouths and swallow. The treatment consists of tetanus immunoglobulin to boost the immune system, a tetanus vaccine, antibiotics and muscle relaxants.

Riaz has almost nothing; still he has some things the 13- year-old girl in the bed next to him doesn&#8217;t. He has a father who tenderly wipes his mouth when a spasm causes him to spit helplessly and who constantly watches over him.

Marcon has been frustrated by language and cultural barriers.

So he gives Riaz paper and crayons and watches him draw, and makes him strawberry shakes from U.S. Meals, Ready to Eat.

The MRE shakes, full of fat and protein, are the only food the tetanus patients have been able to swallow.

Zefreen, 13, seems to have only an older teenaged brother who comes and goes. In the MASH for more than a week, she won&#8217;t allow the male nurses to touch her and remains withdrawn and obviously lonely. &#8220;She cries at night,&#8221; Marcon said.

She had such a severe convulsion after she arrived at the MASH, she bit her tongue and the hospital staff had to force her jaws open to suction out the blood to save her life. She was left with a cracked tooth.

&#8220;She was very frightened when she was first here,&#8221; said Sgt. 1st Class Mohammad Tabassum, one of the MASH translators.

The tetanus vaccine, proved effective and safe during World War II, became part of routine childhood immunizations in the U.S. in the 1940s, according to the Centers for Disease Control and Prevention.