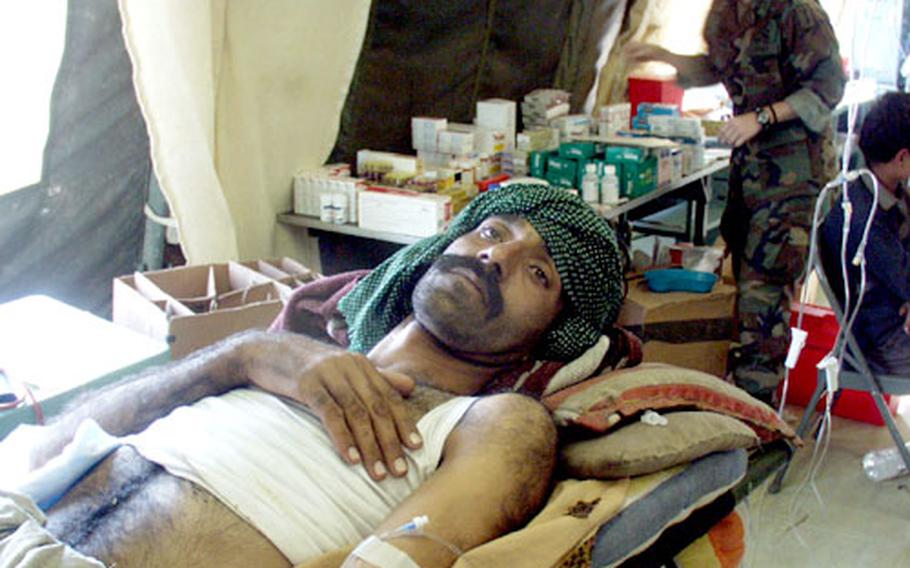 Yasin Mohammed lies in the emergency room of the 212th MASH Wednesday before surgery to attempt to repair his left leg, shattered in the earthquake and infected after weeks without treatment. (Nancy Montgomery / S&S)

MUZAFFARABAD, Pakistan &#8212; Maj. Barbara King asked her patient the standard pre-surgery questions. Was he allergic to anything? Had he eaten within the last several hours? Did he wear glasses? Did he have any loose teeth?

Yasin Mohammed on his stretcher looked like an El Greco saint &#8212; thin, angular, still and obviously suffering. He answered through an Army translator: no, a cookie, no, three.

Mohammed&#8217;s lower left leg had been shattered when the Oct. 8 earthquake rained rocks from a mountain ridge down onto him as he gathered grasses to feed the family cows through the winter. The earthquake killed the cows, a sister-in-law, a brother and other family members in his mountain village near the India border. There was no one left to help Mohammed until a step-brother from Karachi trekked to the village and, with some other men, carried him down the mountain Wednesday.

Mohammed was the first patient of the sort doctors from the 212th Mobile Surgical Army Hospital from Miesau, Germany, had expected to find on their humanitarian mission to Muzaffarabad: an earthquake-related injury that had gone untreated, had become infected, would require orthopedic surgery at least and might require amputation to save his life.

MASH surgeons, after seeing a number of patients come through the ER tent flap with nonsurgical problems since the hospital went up Monday night, were starting to wonder if they&#8217;d arrived too late. The arrival of Mohammed and other patients with broken bones didn&#8217;t exactly cheer them up, but did give them an increased sense of purpose.

King tried to reassure Mohammed, whose age was given both as 29 and 32, and said it was &#8220;very possible&#8221; his leg could be saved. Before long, Mohammed was unconscious in the operating room, accompanied by two operating room technicians, two nurses, a nurse-anesthetist and two orthopedic surgeons.

But once surgeons got a good look at the scrubbed injury under the lights &#8212; and the sunlight streaming through the window covered by mosquito netting &#8212; they knew Mohammed&#8217;s leg could not be saved. The infection had killed the muscle, other tissue and the two bones in his leg that had been broken.

The decision then was where to cut.

With the luxuries of time and resources, in a different setting, said Capt. Neil Vining, the other surgeon on Mohammed&#8217;s case, they might have tried a more conservative, intensive and multidisciplinary approach, cleaning and cutting dead parts away during successive surgeries every 48 hours. Then, if the infection was under control and enough of the leg structure remained, skin and muscle grafts would have been attempted and the leg possibly saved.

But this was a field hospital in an earthquake zone, and those sorts of involved, successive surgeries aren&#8217;t possible.

The surgery lasted a little more than an hour and involved the sorts of tools and force that would make a plastic surgeon feel sick.

Mohammed&#8217;s left lower leg and foot went into a red plastic bag. &#8220;We were briefed that the Pakistanis want to bury their limbs, like they bury a loved one,&#8221; Guiles said.

But when Mohammed&#8217;s step-brother was asked if he wanted the limb, he said no and left the MASH to dispose of it.

The step-brother sat wrapped in an Army woolen blanket by Mohammed&#8217;s side in the intensive care unit after the surgery and stroked his forehead. As soon as Mohammed regained a degree of consciousness, he pointed to where his leg had once been, then closed his eyes and laid his head down, his arm still raised in the air, his hand still pointing to the missing limb.

Mohammed&#8217;s step-brother said the family had lost everything &#8212; lives, livestock, houses, even a small convenience store. The survivors were starving, he said. All they were hoping for now was a tent, he said through an interpreter, to survive the winter.

As for Mohammed, his step-brother said, he would be very, very sad about his leg. Mohammed had told him, he said, that if they cut off his leg, he&#8217;d have nothing left. He was asked, what would become of Mohammed?

Quake aid by the numbers ...