"Disappeared," was taken by Benjamin Busch in May 2003 near Badrah, a village 75 miles east of Baghdad near the Iranian border. Locals gathered to exhume a mass grave outside the town, and brought photographs of their loved ones to identify the remains by the bits of clothing left behind. (Photo by Major Benjamin B. Busch, USMC Res.)

"Disappeared," was taken by Benjamin Busch in May 2003 near Badrah, a village 75 miles east of Baghdad near the Iranian border. Locals gathered to exhume a mass grave outside the town, and brought photographs of their loved ones to identify the remains by the bits of clothing left behind. (Photo by Major Benjamin B. Busch, USMC Res.) "Ice Man," was taken by Benjamin Busch in April 2003 outside of al-Kut, in southeast Iraq. This man was a manager of a ice factory and actually lived in his store after the invasion began because the demand for ice to keep food from spoiling had attracted looters. (Photo by Major Benjamin B. Busch, USMC Res.) 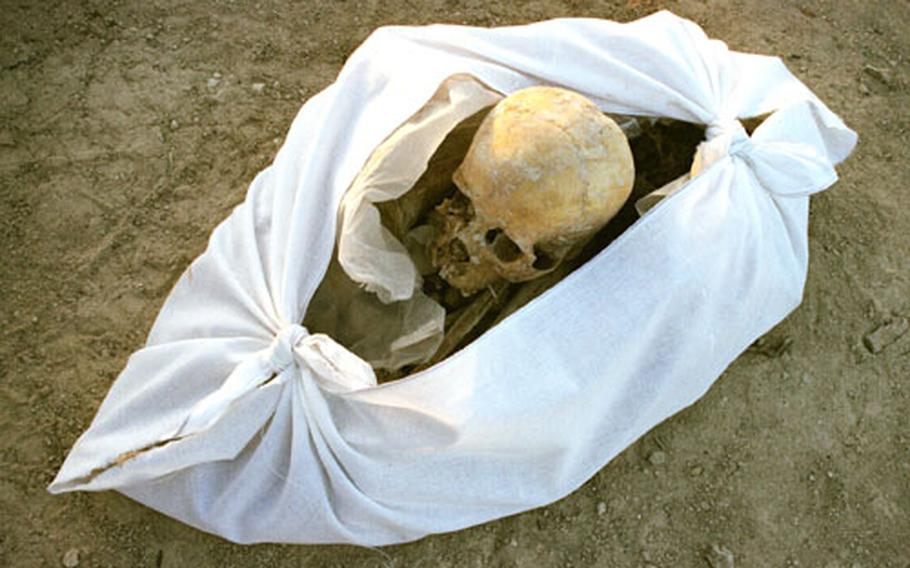 This photo, titled "Gathered In Holy Cloth," was taken by Benjamin Busch in May 2003 near Badrah, a village 75 miles east of Baghdad near the Iranian border. The bones were exhumed from a mass grave outside the town and given a proper Islamic burial by their relatives, some of whom had waited more than a decade to search for the remains out of fear. (Photo by Major Benjamin B. Busch, USMC Res.)

WASHINGTON &#8212; Even though thousands of pictures have been taken during the U.S. occupation in Iraq, Maj. Benjamin Busch doesn&#8217;t think many Americans have really seen the country.

The Marine took hundreds of photos of his own during his 13-month tour following the invasion of Iraq, and will be displaying 100 of them at University of Maryland University College in College Park, Md., next month. He thinks they show an unfiltered look at everyday Iraqis, and their reaction to the war.

&#8220;This exhibit does not insist that the war was a mistake or that it was necessary; those positions have lost their relevance,&#8221; he said. &#8220;It simply states that it is a war and that we have a duty to understand our situation now that that distant country is a part of our lives.&#8221;

Busch, 36, an actor who has performed in a number of television shows including &#8220;The West Wing&#8221; and &#8220;The Wire,&#8221; has been an amateur photographer since graduating from college. He also served as the commanding officer of Delta Company, 4th Light Armored Reconnaissance Battalion, which arrived in eastern Iraq in April 2003.

The pictures in the exhibit were all taken in the following six months, as his unit moved along the Iranian border.

&#8220;It was very difficult to take this series of photographs during my first deployment,&#8221; he said. &#8220;I was the provisional military authority for a large piece of territory &#8230; I could not allow myself or my Marines to be considered vulnerable tourists.

&#8220;There are thousands of images that I had to walk or drive past simply because the moment had not been appropriate to pause.&#8221;

What he did record is a series of faces and emotions of Iraqi citizens watching their country undergo dramatic changes. A number of his photos were put on display at Vassar College in New York earlier this year, and Busch was impressed with how well the audience could separate controversy surrounding the war from the pictures themselves.

&#8220;Intelligent viewers appreciated the messages in the exhibit for what they were,&#8221; he said. &#8220;[The photos] were taken by a Marine with an unlikely combination of both a military and an artistic perspective in a combat zone.&#8221;

&#8220;When I took most of the photographs in this show, I was able to make and, to a certain extent, control the first impression that the Iraqi people had of American occupation,&#8221; he said. &#8220;This time I will be operating in an area corrupted by our armed response to an increasingly popular insurgency.