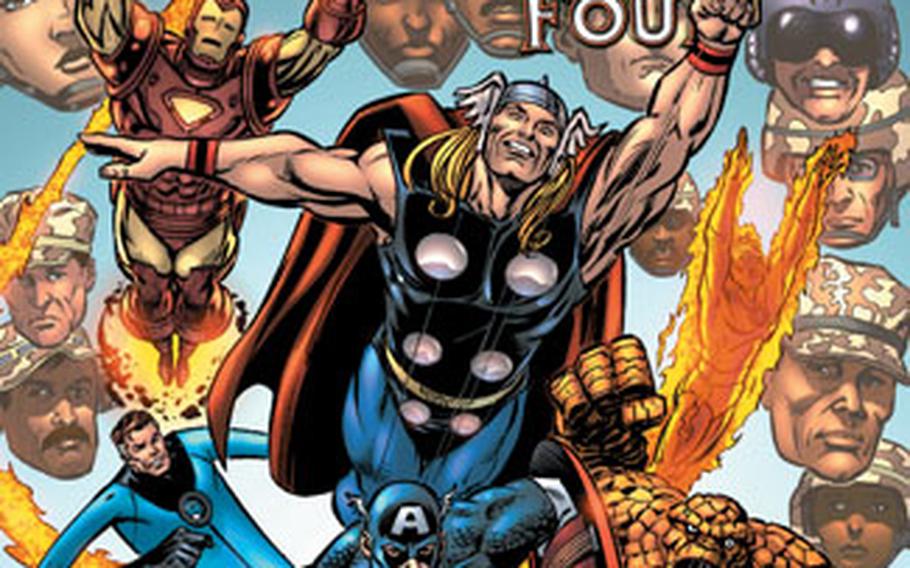 Marvel Comics will publish a 36-page special edition available only at military exchanges. (Courtesy of AAFES)

MISAWA AIR BASE, Japan &#8212; Captain America and company are at it again, this time to disarm an evil cyborg determined to steal AAFES&#8217; annual Morale, Welfare and Recreation dividend.

The wacky plot is the story line of a second custom comic book that Marvel Comics and Army and Air Force Exchange Service plan to distribute free to U.S. troops around the world. Titled &#8220;Pot of Gold,&#8221; the 36-page comic is scheduled to hit AAFES overseas facilities, including 55 base and post exchanges at locations in support of Operations Iraqi and Enduring Freedom, in November. That&#8217;s about a month after it arrives in AAFES stores stateside, AAFES officials announced Tuesday.

&#8220;We&#8217;re going to distribute these evenly throughout the Pacific so they will become available at each of the stores at the same time, with some time in November as a target date,&#8221; said AAFES Pacific spokesman Master Sgt. Donovan Potter. &#8220;It is a second edition; it&#8217;s not a reprint of the first.&#8221;

In May, Marvel Comics distributed more than 1 million copies of its first military-themed custom comic in support of the &#8220;America Supports You&#8221; program, a Defense Department campaign that encourages private citizens, communities and business to reach out to troops and their families. Marvel officials said at the time that the initiative was in response to the huge demand Marvel was receiving from U.S. servicemembers overseas for comic books.

The latest comic will be distributed only at military exchanges.

The second installment features Marvel&#8217;s superheroes &#8220;The New Avengers,&#8221; including Captain America, Nick Fury and Luke Cage. These characters, along with some special guests, come face to face with &#8220;The Disruptor,&#8221; a cyborg armed with disruptive electronic pulse weapons determined to steal the annual dividend AAFES provides for Morale, Welfare and Recreation, according to an AAFES news release.