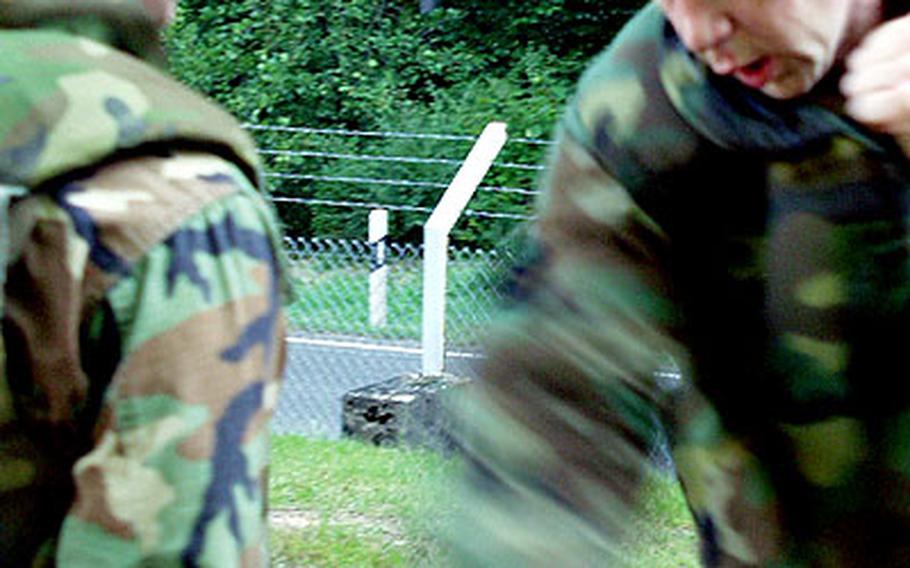 STUTTGART, Germany &#8212; At 8 a.m., the mercury was still in the low 70s, but for the 40 or so Marines wrestling, punching and kicking their way through a martial arts review, training wasn&#8217;t any easier.

By the end of the 90-minute drill, three Marines would be too weak or beat up to continue the first combat conditioning drill of martial arts skills that Marines Forces Europe has had in months.

In October 2000, the U.S. Marine Corps revamped its martial arts training. The program now gives every Marine a basic sense of martial arts skills, which incorporate the moves of various types of disciplines, and individuals can move up a system of belts from tan through various levels of black.

During the drill, Marines crawled on their bellies while carrying other Marines on their backs, exchanged hundreds of punches and kicks with their partners, participated in mock knife battles and flipped other Marines to the ground.

The training is hard, said Master Gunnery Sgt. Jose Garcia, who led the training and also is the operations director for Marine Forces Europe Headquarters. During his initial classes, he said, he broke his foot.

After warming up, the Marines split into two groups. One was the tan belts, the lowest level, and the other was the gray belts, the next higher skill level.

Garcia blew his whistle to signal Marines to move to the next station scattered over Panzer Casern. The Marines got little rest between stations and were urged to punch and kick intensely.

They all wore flak vests and carried protective pads.

Garcia was right when he predicted that near the end of the morning session, after which most of the Marines returned to their assigned duties, the men and women would be at or near their exhaustion point.

Several Marines were too weak to crawl and carry their partners on their backs at one station, and another Marine began to vomit from exhaustion.

Instructors constantly yelled at the Marines to motivate them.

Reidel&#8217;s favorite motivator was to ask fatigued Marines if they were hurt or injured.

If they were hurt, he told them that was only emotional and they could continue; but if they were injured, he said, they should get medical attention.

Other instructors recalled Iraq and told the Marines to imagine they were pulling someone to safety.

The message seemed to work.