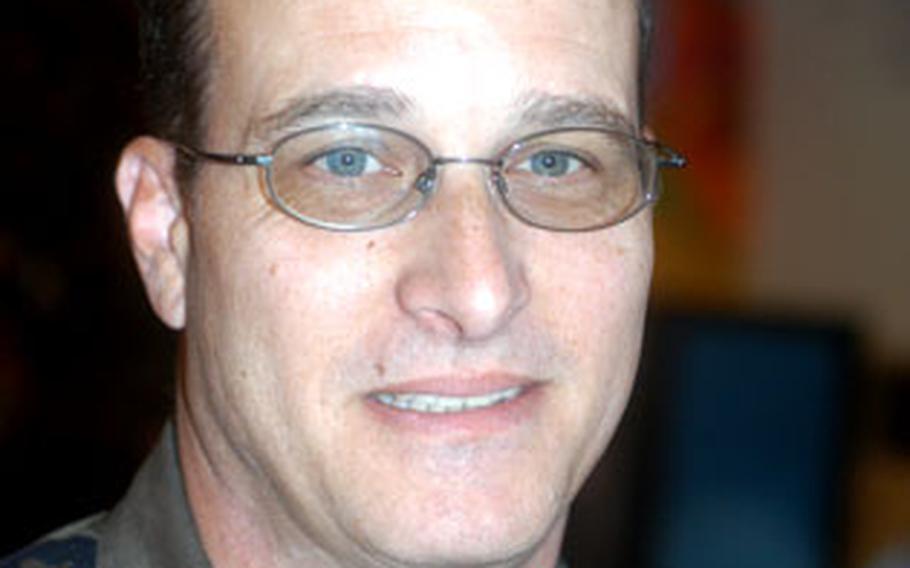 But the two were connected in an intimate way that neither will forget.

Stough, wife of Col. Michael S. Stough, commander of the 100th Air Refueling Wing at RAF Mildenhall, donated her bone marrow in September 2000 for a bone cancer patient in England.

About a year after the donation, a letter arrived from the man. He didn&#8217;t know Stough&#8217;s name, but sent the letter through the Red Cross.

Boone is organizing a drive this month in England to add more names to the registry. The drive will be held at RAF Molesworth on Oct. 26, RAF Mildenhall on Oct. 27 and RAF Lakenheath on Oct. 28.

Boone, whose adopted sister died from cancer after receiving a bone marrow transplant, has organized similar drives at other bases, including twice in the U.K., adding several hundred names to the register each time.

To register, people must fill out a form about their medical history and their ethnicity. They&#8217;ll also give &#8220;about two teaspoons of blood,&#8221; he said.

That information and blood will be sent to a Navy laboratory in Maryland where the human leukocyte antigen, or HLA, will be typed and added to the registry at the C.W. Bill Young/DOD Marrow Donor Center and the National Marrow Registry Program, Boone said.

Medical teams worldwide can search the registry looking for HLA matches for patients, he said. For that reason, Boone said, it is important addresses remain current.

Once in the register, the chances of being asked to donate are small. Boone said 1,770 people in the DOD register have donated.

Stough said she was nervous when she decided to donate her bone marrow.

Doctors offered her a choice of general or local anesthesia, she said. The marrow was pulled from the pelvic bone with a syringe, which caused a bit of pain for a few days.

&#8220;We both cried,&#8221; said Dorfner, remembering the day nearly nine years ago when she met Elaina Ladner.

Dorfner is now a public affairs officer for the 100th Air Refueling Wing at RAF Mildenhall. She donated bone marrow that was transplanted into Ladner, then a high school student in Mississippi, a year before the two met.

Dorfner learned that her gift had restored Ladner&#8217;s capacity to produce healthy blood cells, an ability lost during treatment of the leukemia that had threatened her life.

Ladner&#8217;s mother also supports the program. Darlene Ladner and her husband, Carl, are now in the registry. She knows the effect it can have.