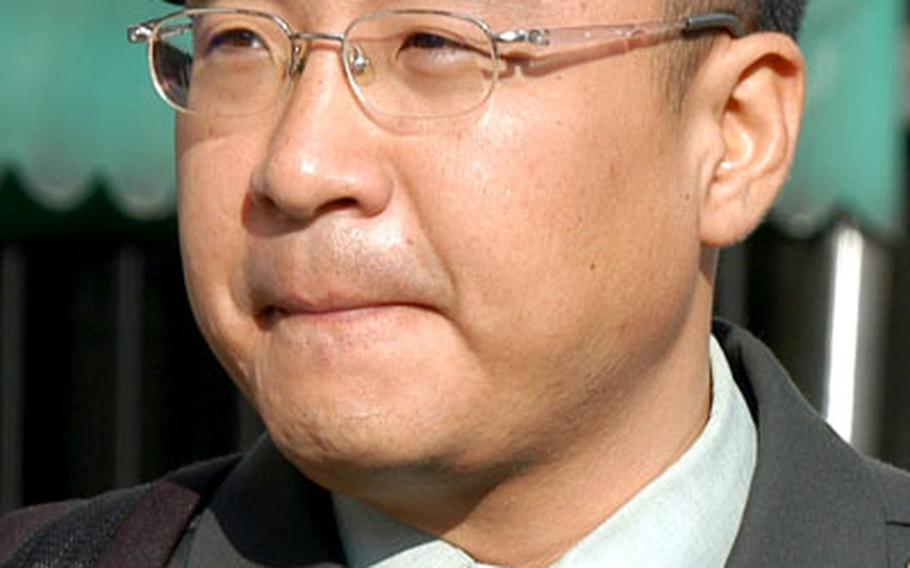 UIJEONGBU, South Korea &#8212; A U.S. soldier admitted in Korean court Wednesday that he had cheated on his wife and promised to marry his girlfriend in return for a sexual relationship, both crimes under Korean law.

Sgt. Jin-hong Han, 35, who is assigned to the 2nd Infantry Division, didn&#8217;t know he was committing crimes when he began an affair with a Korean woman this fall, his lawyer, Jung Jin-sung said in Uijeongbu District Court on Wednesday morning.

Still, through his lawyer, Han admitted to both crimes, and the Uijeongbu prosecutor requested a sentence of 18 months in prison. Judge Kim Byung-ju will sentence Han on Jan. 11.

During Wednesday&#8217;s hearing, Han showed no emotion but gave a short apology, saying he was sorry for making problems for the people in his life.

In November, Han was indicted by the Uijeongbu prosecutor&#8217;s office for adultery and sexual intercourse under the pretense of marriage. Han, a U.S. citizen born in South Korea, also is the subject of a military police investigation, 8th U.S. Army officials have said.

Han left for America during his junior year in high school, his lawyer said in court. Han joined the U.S. Army in 2000 and was stationed at Camp Red Cloud in South Korea in 2004.

Shortly after arriving in his birth country, he met Na Sun-wha through a Korean version of www.match.com, his lawyer said. They met in fall 2004 and were married in February, his lawyer said.

The relationship grew sour, in part because Na lived more than an hour south of Seoul, and partly because Na took $1,000 of Han&#8217;s monthly income and gave him about $50 in spending money each week, Jung said.

A month after his marriage, Han returned to the Internet chat site and met Kim Hyo-jin, another Korean woman, according to his lawyer. By fall he was seeing her in Seoul and Uijeongbu and told her he was a lieutenant colonel making $90,000 a year, Jung said.

After the meeting, Han promised to set a date to marry the girlfriend, his lawyer said in court.

Finally, after Han stopped returning her calls, she sought out his parents&#8217; home in a northern suburb of Seoul, the lawyer said. She came face to face with his real parents and learned of his marriage, Jung said.

Soon after, Han&#8217;s wife grew suspicious and took a close look at his cell phone records, the lawyer said. The wife called the girlfriend and the two women exchanged their stories, Jung said.

During Wednesday&#8217;s hearing, Judge Kim asked Han if he wanted to deny anything his lawyer said. Han told the judge his lawyer was telling the truth.

Kim asked both sides if a settlement was possible in the case. According to Han&#8217;s lawyer, the wife has asked for $10 million.