Married but on two ships passing in Gulf 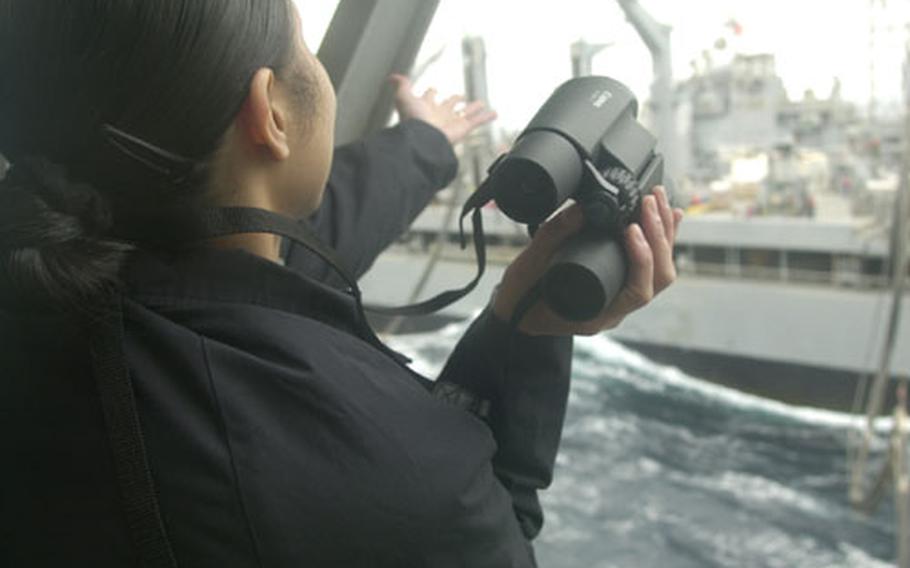 From the USS Kitty Hawk, Seaman Monasol Teron reaches out to her husband on the USS Cowpens during an underway replenishment Thursday in the northern Persian Gulf. (Kendra Helmer / S&S)

From the USS Kitty Hawk, Seaman Monasol Teron reaches out to her husband on the USS Cowpens during an underway replenishment Thursday in the northern Persian Gulf. (Kendra Helmer / S&S) 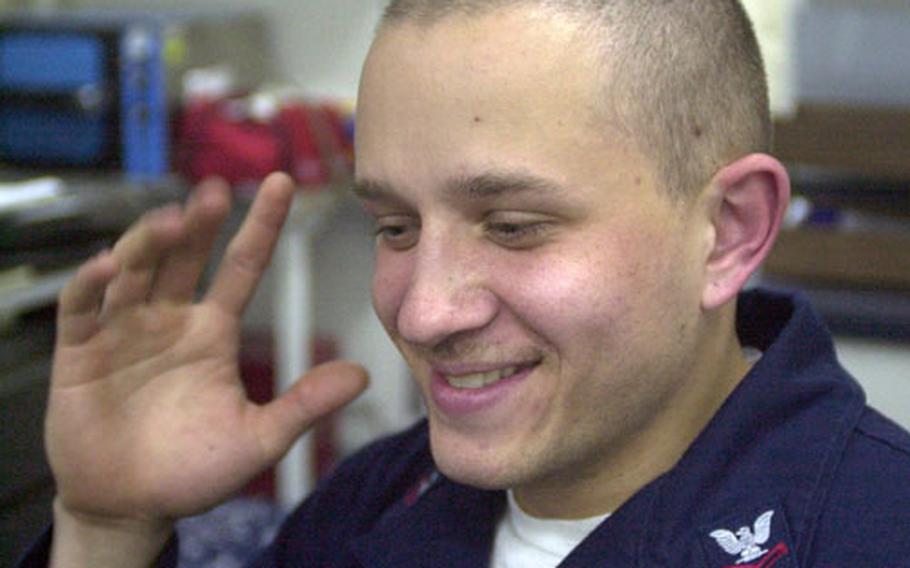 Petty Officer 2nd Class George Teron, on the USS Cowpens, grins while talking about how he met his wife, Seaman Monasol Teron, who is serving on the USS Kitty Hawk. (Kendra Helmer / S&S)

PERSIAN GULF &#8212; A few weeks ago, Seaman Monasol Teron strolled outside around the aircraft carrier USS Kitty Hawk as it was getting refueled.

Looking past the refueling ship that had pulled up alongside, she saw a familiar cruiser also getting some gas.

After pounding out a frantic note, she rushed back outside.

&#8220;By the time I got up here, he was out there waiting,&#8221; said Monasol, who started jumping up and down and blowing kisses to her husband, Petty Officer 2nd Class George Teron, who is stationed aboard the USS Cowpens.

Since that unexpected encounter, the Terons have kept track of replenishment schedules.

If the timing is right, they get a chance to see each other.

In the 50 days since their ships left Yokosuka, Japan, for the Persian Gulf, the Terons have met three times &#8212; from a distance of 500 yards.

On Thursday, Monasol Teron studied her husband through the choppy seas.

They throw kisses for nearly an hour and gesture &#8220;I love you&#8221; like school kids, drawing curious stares from their shipmates and from sailors on the replenishment ship in between them.

Earlier in the week aboard his guided-missile cruiser, George Teron talked about how he met his wife-to-be two years earlier at A-school in Great Lakes, Ill.

The two only spent five days together, but wrote daily until they met again for a few days in New York City.

In Times Square, he professed his love.

Monasol Teron moved to Japan to be a dentalman on the Kitty Hawk. George Teron followed shortly thereafter.

When the planes hit the World Trade Center, the two sailors were in Yokosuka&#8217;s fleet center. The base went to Threatcon Delta, and the two were stuck on their ships for three days.

They saw each other briefly Sept. 14 before the Kitty Hawk headed west and the Cowpens toward Guam. After Christmas, they hopped on a plane to Guam.

In the two years they&#8217;ve known each other, they&#8217;ve spent about six months together. They are scheduled to transfer to the States in December. Until then, they look forward to distant glimpses of each other through binoculars.

The two are never far apart; their ships are in the same battle group and often are visible across the water.