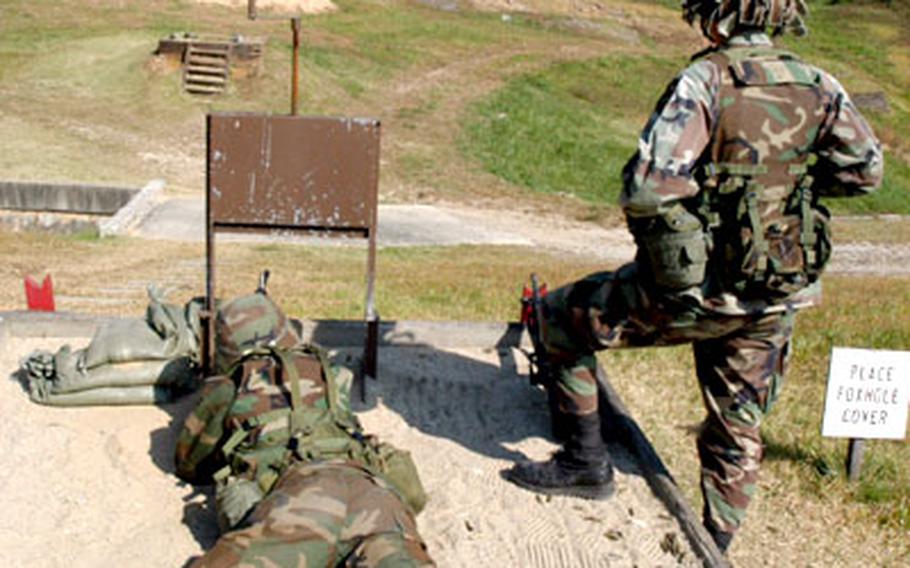 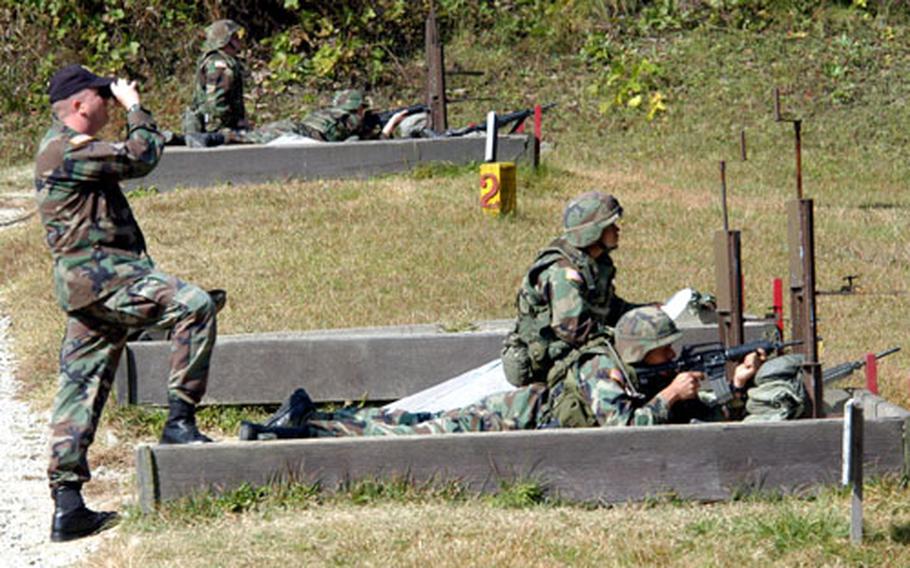 While an instructor from the U.S. Army Marksmanship Unit watches the target through binoculars, a 2nd ID soldiers fires his M-16 rifle Thursday at Apache Range. (Seth Robson / S&S)

APACHE RANGE, South Korea &#8212; The ground fight against insurgents in Iraq means the Army is placing more emphasis on marksmanship for soldiers no matter what their military job, says a shooting expert tutoring 2nd Infantry Division soldiers this week.

&#8220;The war in Iraq is a ground war. Every [soldier] &#8212; from reporters to medics &#8212; needs to be able to shoot their weapon,&#8221; Sgt. 1st Class Grant Singley said as soldiers took up firing positions on the range and trained their sights on targets scattered across a steep South Korean hillside.

Singley is one of three instructors here from the U.S. Army Marksmanship Unit, Fort Benning, Ga.

The instructors will be at Apache Range for three weeks conducting four, four-day classes to teach 120 noncommissioned officers techniques they can pass on to their soldiers. The training, which began in 2004, likely will become an annual event, said Singley, 34, of Henry, Ill.

The course includes a day of classroom work and dry firing followed by three days on the range, he said.

&#8220;We teach basic techniques &#8212; sight alignment and trigger control &#8212; which is really all there is to marksmanship. The more you dry-fire [with correct technique] the more likely when you are in a pressure situation you will know what to do.&#8221;

The key to good sight alignment is to look at the rifle sight rather than the target, he said.

In the past, instructors told soldiers to rest just the tip of their finger on the trigger, he said.

&#8220;Now the standard technique is to wrap the finger around the trigger and pull to the rear. If you pull to the side it can disrupt the weapon. You have to be smooth on the trigger,&#8221; he explained.

The U.S. Army Marksmanship Unit spends half the year training soldiers and half the year competing in high-powered rifle marksmanship contests. Singley said he can hit a 10-inch target at 1,000 yards using an M-16 with an iron sight.

Fourth Squadron, 7th Cavalry Regiment soldier Sgt. Ryan Hey, of Pittsburgh, already was an expert marksman before coming to the Apache Range course. But by the fourth day, he said, he had improved his shooting.

Another soldier taking the course, Staff Sgt. James Edwards, 37, of Houston, said he does not get to practice shooting much in his job in operations with 2nd ID headquarters.