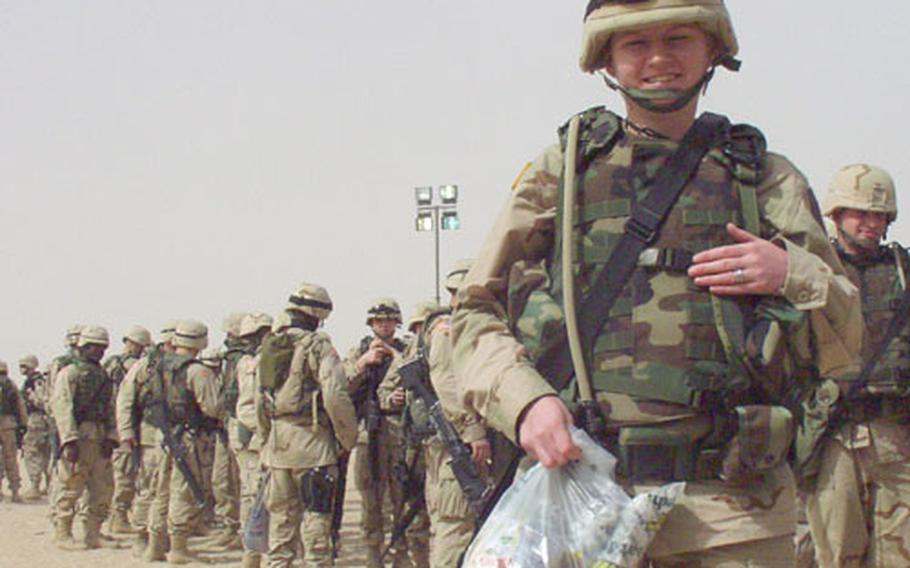 Spc. Natasha Carter, 25, of Gallatin, Tenn., emerges with her turkey sandwiches from the Subway trailer at Camp New York, Kuwait, 2½ hours after getting in line. (Steve Liewer / S&S)

Spc. Natasha Carter, 25, of Gallatin, Tenn., emerges with her turkey sandwiches from the Subway trailer at Camp New York, Kuwait, 2½ hours after getting in line. (Steve Liewer / S&S) 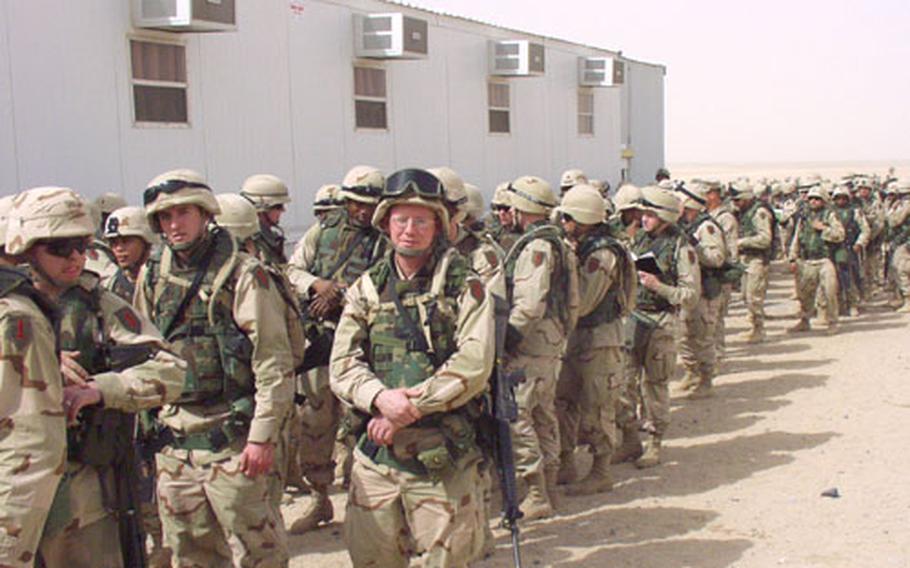 These soldiers near the front of the the lunch line at Camp New York&#39;s main dining facility Tuesday had been waiting for more than an hour. The lines at restaurants, chow halls, the phone bank and the PX have swelled the past two weeks as 1st Infantry Division troops from Germany as well as Marines have streamed into the camp. (Steve Liewer / S&S) 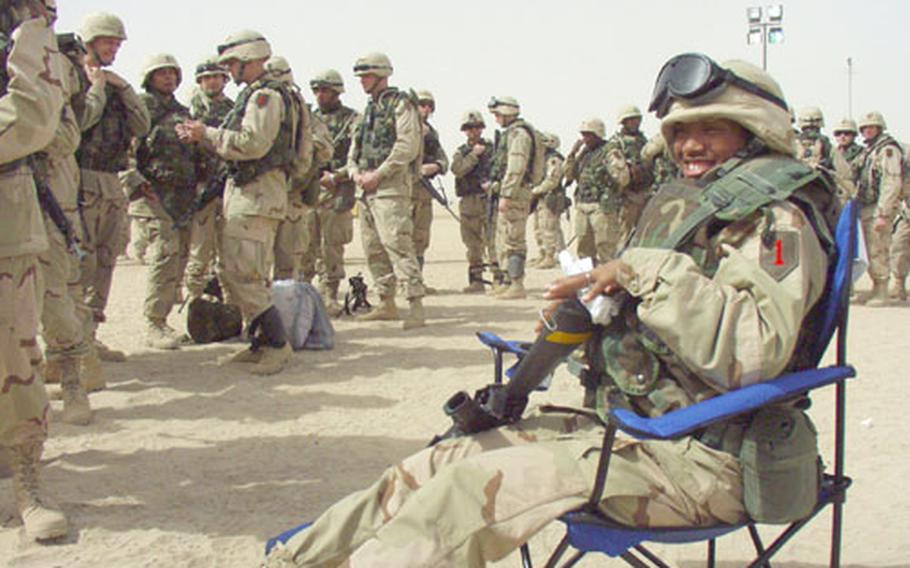 Pfc. Tanoya Reynolds, 18, of Chicago, waited in line at the Camp New York PX to buy this chair Tuesday morning — so she could sit down while waiting in the lunch line for the Subway sandwich trailer. She has been waiting for about 90 minutes, and about 30 people were still in front of her in line. (Steve Liewer / S&S) 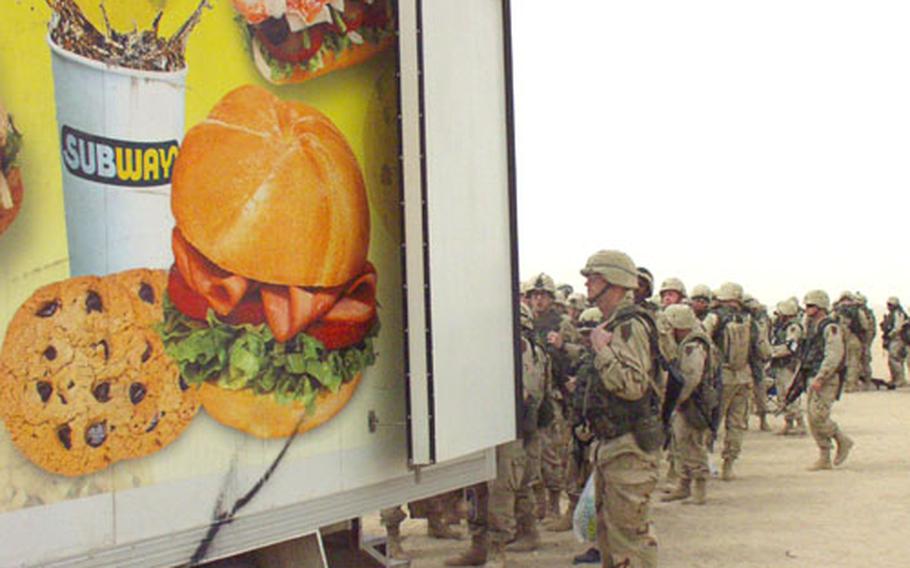 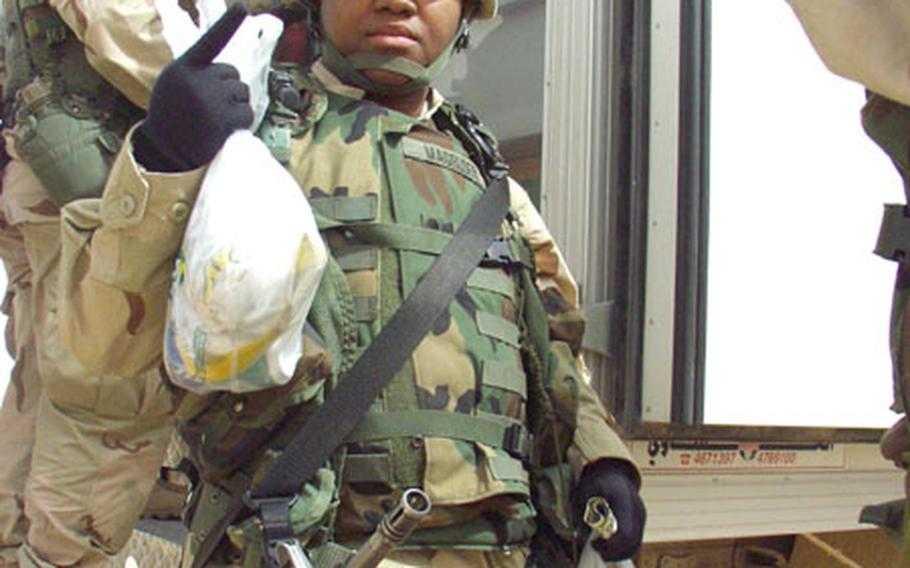 Spc. Lakisha Magruder, 23, of Richmond, Va., emerges with two sandwiches from Camp New York&#39;s Subway sandwich trailer, after waiting in line for more than two hours. Magruder is a member of the headquarters detachment of the 299th Forward Support Battalion, which arrived in Kuwait last week from Schweinfurt, Germany. (Steve Liewer / S&S)

Carter, 25, of Gallatin, Tenn., climbed in line in front of the little Subway sandwich trailer at 9:30 a.m. At noon, she arrived at the front of the line, and minutes later, she climbed down the steps with a satisfied grin.

Between 300 and 500 new soldiers and Marines a day are pouring into this temporary camp in northern Kuwait, preparing to head north to Iraq in the coming weeks. Capt. Jose Escamilla, 37, of the 467th Quartermaster Battalion &#8212; who is the executive officer of Camp New York&#8217;s mayor cell &#8212; said it will reach its capacity of 9,500 troops sometime next week.

Camp New York lies just a couple of miles across the desert from Camp Udairi, the other main springboard for Germany-based 1st Infantry Division troops. Udairi will be home to nearly 14,000 troops by the middle of the week, according to its mayor cell, and is suffering the same pains.

Most of the soldiers at New York come from the 1st ID&#8217;s 2nd Brigade, based in Schweinfurt. Although they are doing some training, their gear hasn&#8217;t yet arrived at the port in Kuwait City, so they have few fixed duties.

An increasing amount of their time is spent standing in lines. Even with two brand new short-order chow halls opening last week to supplement the main dining facility, lines can stretch more than an hour long. The Subway line is a 2 to 3 hour wait. Soldiers say it takes 3 to 6 hours to get into the little PX. Even the barber shop requires a 45-minute wait.

The Department of Defense is building Udairi as a permanent hub for Army aviation in Kuwait and is pumping money into permanent facilities there.

Not so at New York, which Escamilla said will close &#8212; possibly for good &#8212; after this spring&#8217;s massive troop replacement pushes almost 250,000 soldiers and Marines en route to or from Iraq through the Kuwaiti holding camps.

So, Escamilla said, it makes little sense to enlarge the PX or add more restaurants that won&#8217;t be needed in a few weeks.

Soldiers, conditioned by the Army to waiting in lines, endure the delays with remarkably good humor.

Pfc. Tanoya Reynolds, 18, of the Kitzingen-based 701st Main Support Battalion, arrived at 6 a.m. to wait in line for the 8 a.m. opening of the AAFES exchange. Her purchases included a folding blue lawn chair.

At 10:40 a.m., she got into the growing Subway sandwich line. As other soldiers stood burdened by the weight of their heavy gear, Reynolds sat comfortably in her chair.

Soldiers are resourceful. Friends will make deals, with one going to the exchange to make purchases for his buddy, while the other buys sandwiches for them both. Eating early or late helps a bit, too.

They look forward to better times. Iraq may be a war zone, but its on-base eateries and post exchanges are said to be less crowded.

In the meantime, at least, soldiers know they&#8217;ve got plenty of company.