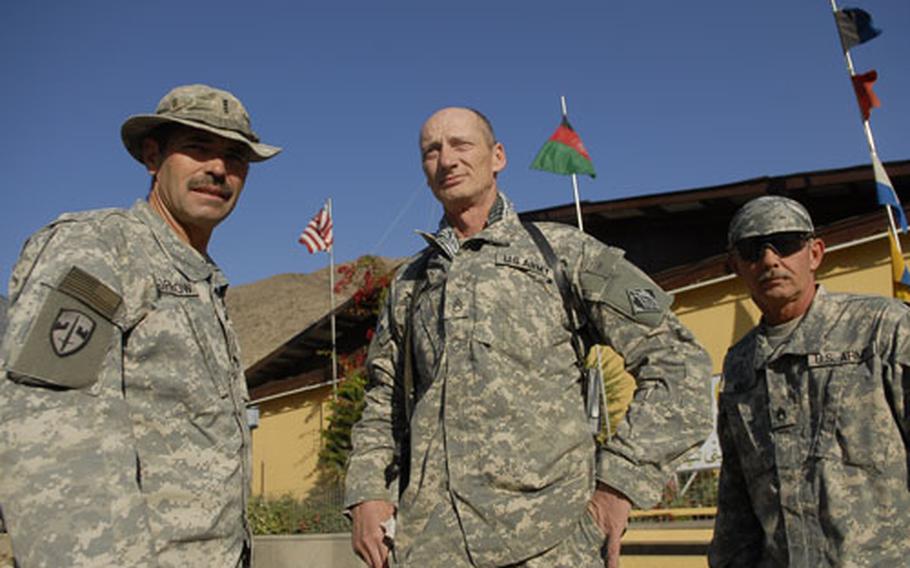 From left, Chief Warrant Officer 4 Steven Morrow, 58, of Camp Verde, Ariz.; Staff Sgt. Steven Cardoza, 52, of Rathdrum, Idaho; and Staff Sgt. Coyde Wolfe, 48, from Covington, Virginia, pose for a photo at Camp Wright in northeastern Afghanistan. The men are all attached to the Army Corps of Engineers and between them have decades of off and on service in the Army. But Morrow beats them all with nearly 40 years of consecutive service between the U.S. Marine Corps and Army. (Les Neuhaus / S&S)

U.S. Army Chief Warrant Officer 4, Steven Morrow, 58, from Cape Verde, Ariz., who is now a member of the Army Corps of Engineers, started out in the U.S. Marine Corps in 1968 and now serves in Afghanistan.

&#8220;I arrived at Parris Island, South Carolina, for boot camp in February 1968,&#8221; he said at his newest deployment site in the rugged northeastern mountains of Afghanistan, the MACV (Military Assistance Command Vietnam) patch worn with pride on his right shoulder.

In Vietnam, Morrow was a door gunner on a type of transport helicopter that has since been discontinued, and was based out of Marble Mountain Airfield, just south of Da Nang Air Base.

He said he knows of only one other active-duty soldier who wears the Vietnam patch back in Arizona. Otherwise, he said, some troops recognize the patch, but most of the younger soldiers don&#8217;t notice it.

Though the military has undergone quite a transformation since he joined, he said he feels the same.

Morrow crossed over to the Army in 1973. He had two stints in the National Guard.

The chief warrant officer plans to stay in the Army for two more years before he retires. His 40th year anniversary as an American serviceman is in February.

His wife and two grown daughters reside in Arizona.