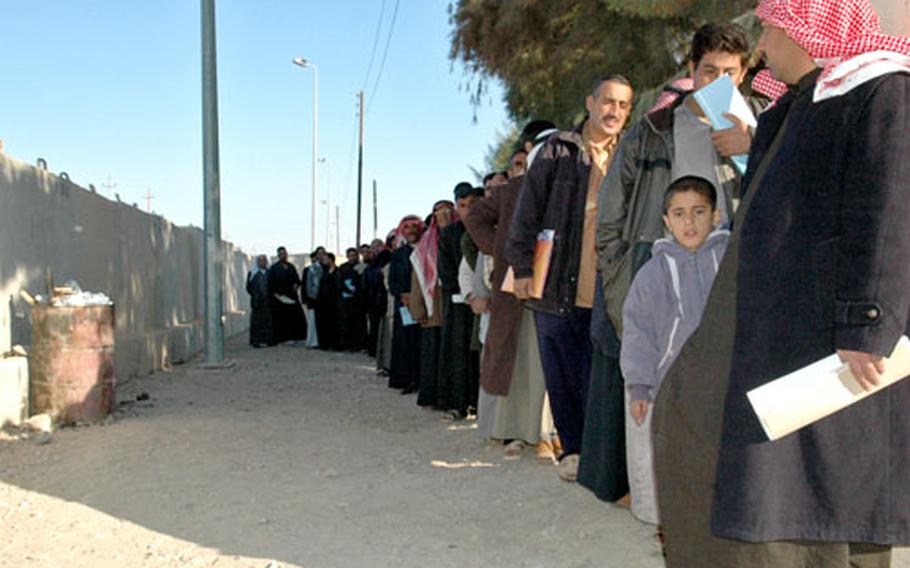 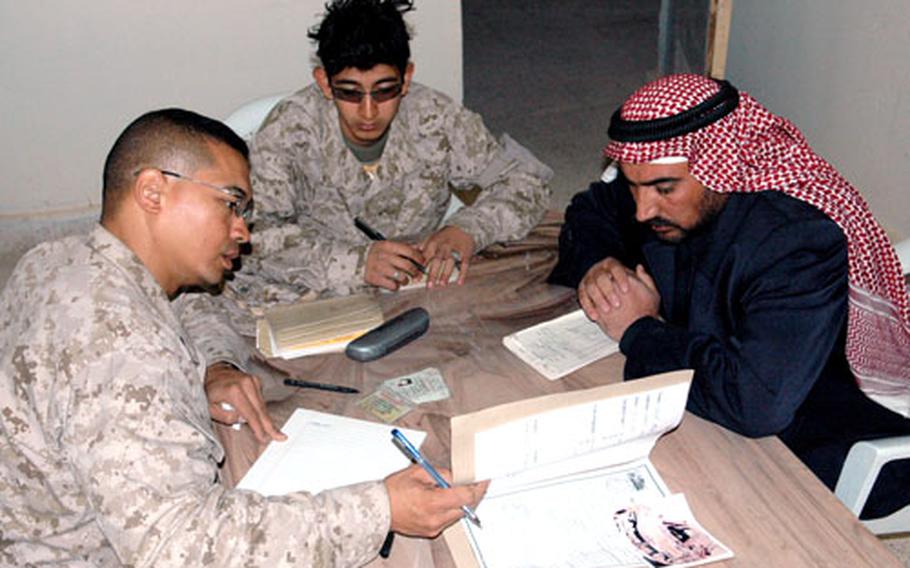 Lt. Col. Robert Glover and a translator meet with an Iraqi man who claims U.S. forces damaged his home and shop during the battle of Husaybah earlier this month. (Andrew Tilghman / S&S)

HUSAYBAH, Iraq &#8212; Abdul Nasser Gazi was one of more than 150 men who lined up outside the newly established U.S. Marine base in Husaybah on Monday to lodge complaints and request compensation for property damaged in a seven-day battle earlier this month.

A 32-year-old who runs a small electrical shop, Gazi said he left the city as the fighting began and returned afterward to find his home demolished.

&#8220;My neighbor told me that the American forces destroyed my house,&#8221; Gazi said as he showed several Marines photographs of crumbling walls, piles of rubble and a tangle of reinforcement bars. &#8220;I want to rebuild my house as soon as I can.&#8221;

In a scene that repeated itself dozens of times Monday, Lt. Col. Robert Glover explained to Gazi the U.S. military&#8217;s process for compensation claims.

The formal opening of the Civil Military Operations Center in Husaybah marks a key step in U.S. Marines&#8217; efforts to stabilize the city after the battle. The weeklong sweep aimed to clear the city of insurgents who had operated openly in Husaybah for more than a year and to curtail their use of the city as a smuggling route for weapons and suicide bombers moving along the Euphrates River valley.

The compensation program is designed to cultivate goodwill between the U.S. military and local residents, many of whom are still reeling from extensive physical damage to their city and the loss of electrical power and water service.

More than 100 men were turned away outside the gate Monday as civil affairs officers conceded they could not process more than 50 claims in a single day. The compensation claims office will be open to the public three days a week for the immediate future, Marines said.

Glover and others will begin sorting through myriad complaints to separate the legitimate ones from those that were not caused by the battle.

One man said the Marines destroyed his car, but Glover looked closely at his photographs and grew skeptical.

Complications also stem from damage caused by insurgents, who steal cars or storm into homes and use them as battle positions in a fight.

Upper-level civil affairs administrators must approve all claims. Caps for damages include a $2,500 maximum payment for a death in the family and similar limits for property destruction, Glover said.

The compensation can be politically delicate for the Marines, who have to identify bogus claims but do not want to anger local residents.