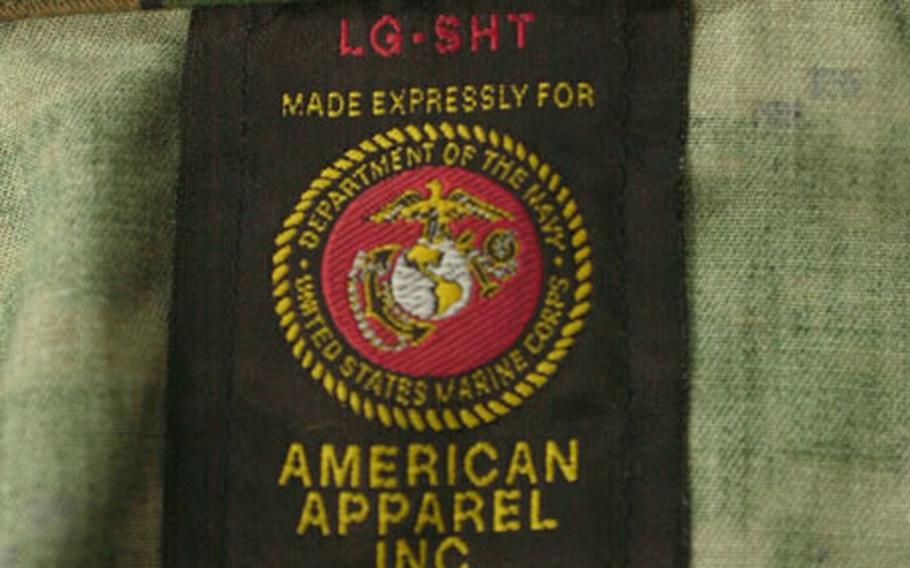 Officials are urging Marines to check the label for one of the tell-tale tags that states the new uniform is "expressly made for" Marines. (Mark Oliva / S&S)

Officials are urging Marines to check the label for one of the tell-tale tags that states the new uniform is "expressly made for" Marines. (Mark Oliva / S&S) 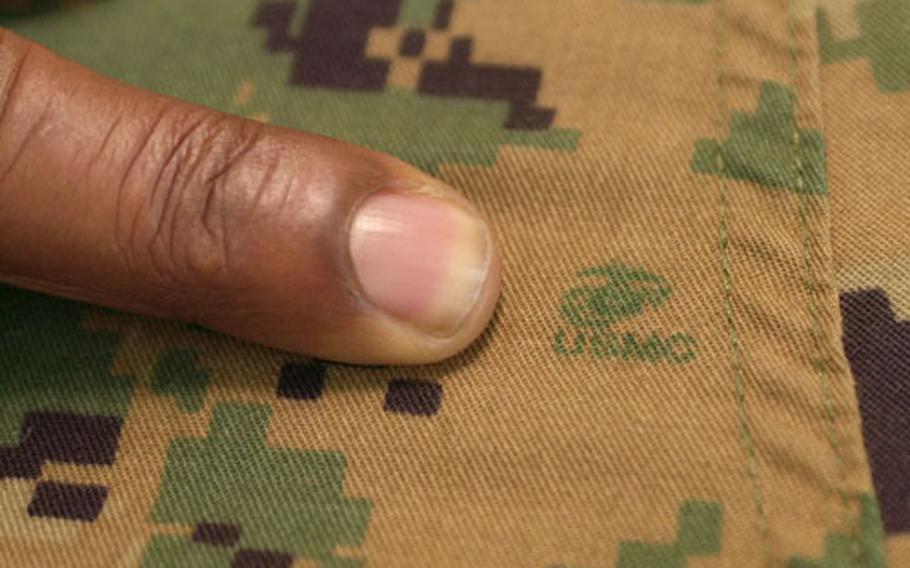 Officals are uging Marines to look for the tiny Eagle, Globe and Anchor printed in the middle of the digital patterns to verify the uniforms are authentic and authorized for wear. (Mark Oliva / S&S)

CAMP FOSTER, Okinawa &#8212; The rush for Marines to look uniquely Marine in their new digital camouflage uniform is spawning a few fakes.

Marine officials on Okinawa are warning their ranks to check the label to make sure the new uniform they&#8217;re wearing is the real deal.

Unauthorized uniforms, similar to the new Marine Pattern digital combat utility uniform, are cropping up, even at military surplus store on Okinawa. They&#8217;re close to the new Marine uniform, down to the embroidered Marine emblem on the slanted chest pockets.

But there is a distinct difference.

Only three companies are contracted to produce the new uniforms: Propper International, American Apparel and EA Industries. Tags all appear on the new uniforms with a Marine Corps seal.

Robinson said any Marines found wearing unauthorized uniforms will be ordered to change them out.

Unauthorized uniforms were selling for roughly $130 for the blouse and $62 for trousers.

That&#8217;s why Marine officials are trying to get the word out now. Unauthorized uniforms actually began appearing last July, but the numbers were small.

In December, officials learned Marines were purchasing uniforms through eBay, the online auction site. Marine Pattern uniforms were selling as high as $150 per set, almost triple the price at on-base uniform stores.

Sets of uniforms advertised on the Web site over the New Year ran as high as $149, under the Buy It Now option and one set from a seller in Jacksonville, N.C., home of the Marine&#8217;s Camp Lejeune, was running for $103.49.

He added that small unit leaders are being urged not to pressure their Marines to purchase the new uniforms until the requirement date of Oct. 1, 2003. Marines will be required to own only one pair of the new uniforms then and the old woodland patterns still will be authorized for wear.

Robinson said supplies of the new uniforms are expected pick up. Initial supplies were directed to the two Marine Corps Recruit Depots and Officers&#8217; Candidates School during the summer.

&#8220;Things are getting better,&#8221; Robinson said. &#8220;Each individual uniform store will now receive their own allotted amount. Before, we received the shipment here and then divided them up.&#8221;

Camps Hansen and Schwab stores expect to receive 1,300 sets each on Jan. 13. The new uniforms were stocked on Camp Foster&#8217;s shelves over the New Year, but there were no covers, the Marine term for hats.

Robinson said further questions of procurement and wear of the new uniforms can be answered by referencing Marine Corps Orders P10120.28F and 34. All Marine messages 015-02 and 028-02 provide additional guidance concerning transition and care of the new uniform and boots.