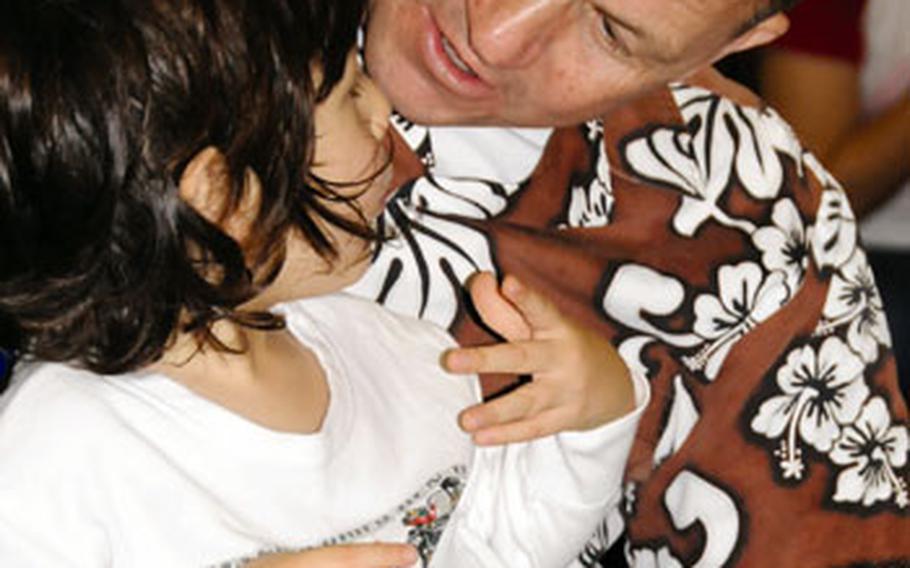 Maj. Bob Hanovich, with Marine Wing Headquarters Squadron 1, talks with Loy, an Okinawan boy whose American father is no longer with his Okinawan mother, during a Big Bear Club meeting on Camp Foster on Sunday. (Cindy Fisher/S&S)

CAMP FOSTER, Okinawa &#8212; It&#8217;s not easy raising a child of American and Japanese descent, say some Okinawan mothers of such children.

Too often, these mixed-race kids have trouble making friends with their Japanese peers. And when the American parent is not part of the family, they lose half of their cultural heritage, Kikuno Higa said. Higa has a 10-year-old, Austin, whose American father is not part of the picture.

"I wanted [Austin] to know about the American culture and then to have other friends of the same cultural background," Higa said Sunday during a gathering of the Big Bear Club at the Globe and Anchor club on Camp Foster. Marine volunteers spent the afternoon teaching the children about Easter and the art of dyeing eggs.

Michiyo Akamine started the club in 1998 after her own mixed-raced son had trouble fitting in with his Japanese classmates. It&#8217;s made up of American and Japanese volunteers, and Japanese mothers and their Amerasian children.

Volunteers teach English the first three Saturdays of each month. On the fourth Sunday, the children learn about American customs and holidays.

It&#8217;s similar to the Big Brothers/Sisters in the States, except here it is done as a group, volunteer Master Sgt. Mike Hansen said.

Through the club, her 5-year-old daughter is establishing her identity as an American, said Ikuko Goulding, who is divorced from her daughter&#8217;s father.

Goulding said that wouldn&#8217;t be possible without all the volunteers and the time they put in.

But the Marines get just as much out of it, said Maj. Bob Hanovich, a volunteer with Marine Wing Headquarters Squadron 1.

"I get to be with these wonderful kids," Hanovich said.

The club also builds better relations between the local community and the American military, Hansen said.

"This breaks the cycle of disliking Americans," Hansen said, adding that these kids are learning that Marines aren&#8217;t so scary after all.

And it also gets young, single Marines to interact with the local community in a positive situation, Hanovich said.