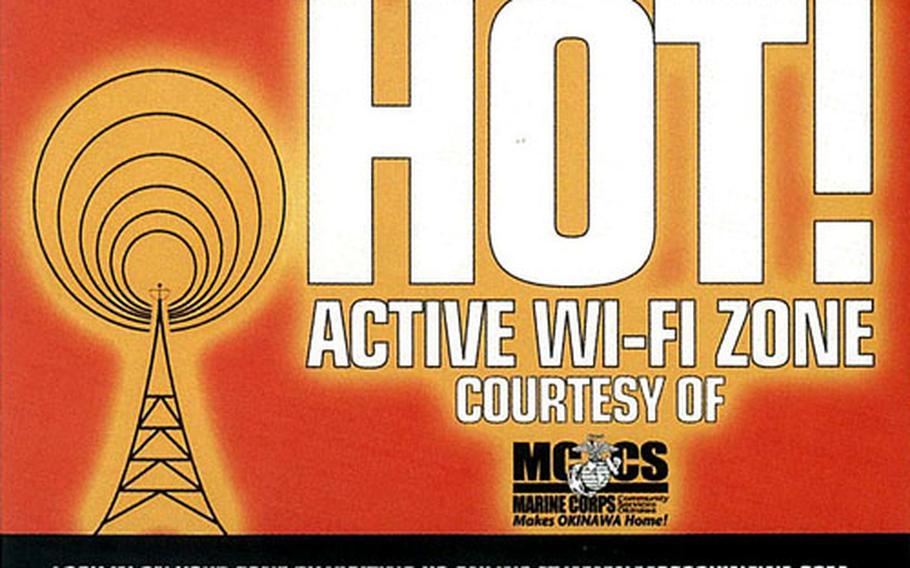 This sticker will appear on the door of any Marine Corps Community Services building that is equipped to provide the complimentary wireless Internet connection. (Courtesy of MCCS)

CAMP FOSTER, Okinawa &#8212; For those who like to surf the Web, chat with friends, or send lengthy e-mails, your high-speed dreams are about to come true.

Anyone who visits one of the equipped buildings will be able to surf the Web, provided their laptop has the capability.

The project is broken down into three phases, Hazelbaker said. The first, allowing e-mail access at base library Internet stations, has been completed.

The second phase, he said, is Friday&#8217;s opening of the new locations, with a second step of opening another 18 sites by March 3.

The last phase will see the closing of cybercafes on Camps Schwab and Hansen and Marine Corps Air Station Futenma. Hazelbaker said those computers will be used to make Internet kiosks by March 31 at 42 locations, allowing people without laptops to access the Internet.

Cybercafes on Camps Foster and Courtney will remain open, he said.

The project came about when base and MCCS officials discussed the idea of better e-mail access for troops. Once he had the green light, Hazelbaker said, he had a plan together in a week.

Gaining access to the network is simple, Hazelbaker said. If a laptop is equipped, it will recognize the connection as soon as it&#8217;s turned on.

For those who don&#8217;t have Wi-Fi-equipped laptops, wireless connections are readily available at an affordable price, he added. MCCS also has put instructions on how to use the service, as well as locations, on its Web page at www.mccsokinawa.com.

Several sailors stationed on Okinawa said they welcome the service.

Seaman Daevita Dumas, who works at the Bush Dental Clinic on Camp Courtney, said she doesn&#8217;t like to use places like the cybercafes and pay for Internet use.

Fellow Seaman Kenneth Allen, who works at the Evan Dental Clinic on Camp Foster, said it will be convenient for his job because he does a lot of work online. He said there are many people in his section, but only two computers to use.

While laptop users can surf the Web as long as they want, Hazelbaker said they&#8217;re patrons are being asked to honor a 10-minute time limit on the kiosks.

He also added that content will be filtered &#8212; no adult material may be viewed &#8212; and they plan to program kiosks to restart periodically to safeguard private information that accidentally might be left open.