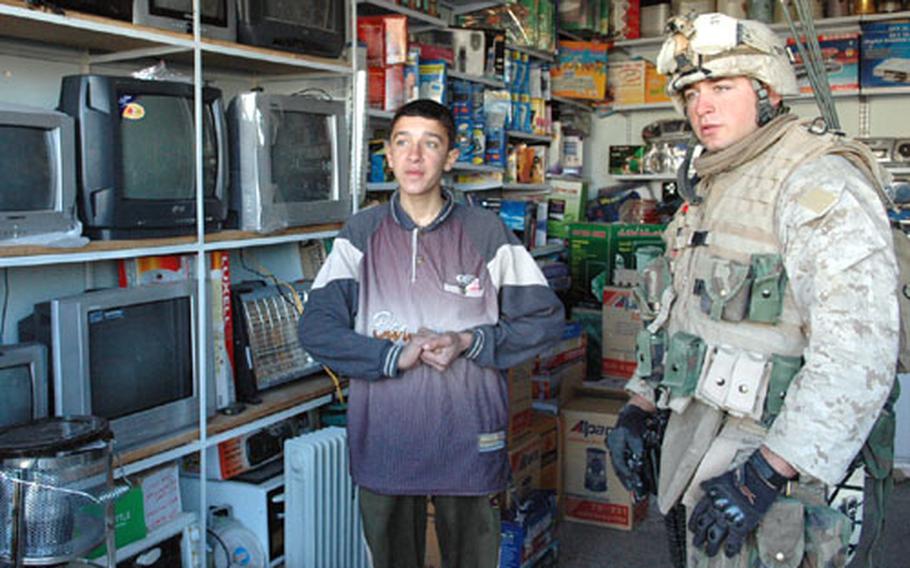 Cpl. Jeff Gattis offers up a mixture of U.S. dollars and Iraqi dinars to buy a television, satellite dish and receiver — a $230 package. (Andrew Tilghman / S&S) HUSAYBAH, Iraq &#8212; Cpl. Jeff Gattis stepped inside the cluttered Iraqi electronics shop, dropped his flak vest and Kevlar helmet on the tile floor and got down to business.

Here in this dusty Syrian border town, turkey dinner took a backseat to television and satellite dish shopping as the focus of Thanksgiving Day, as one platoon of Marines went into the city&#8217;s bustling market place to find a key creature comfort for their newly assembled home.

&#8220;It&#8217;s all about football,&#8221; Gattis explained, hoping the platoon&#8217;s group purchase will allow the 45 men living in a battle-damaged youth center to catch the last leg of the college and professional football seasons.

Troops with the 3rd Battalion, 6th Marine Regiment swept through the city in a seven-day battle earlier this month. Now, Lima Company&#8217;s second platoon plans to spend the remainder of their deployment here, stabilizing the battle-scarred city and setting up the Marines&#8217; long-term presence in this former insurgent stronghold.

With nearly a dozen televisions lining the upper shelves, an 18-year-old Iraqi store clerk wielded a large calculator, pointing to individual TV sets and punching in prices &#8212; in U.S. dollars &#8212; for the Marines to consider.

They finally settled on a 21-inch LG brand TV for $140. The Marines were less picky about the satellite dish, receiver and connection cords they would need to complete the project.

After tallying the entire purchase price at $230, the store clerk was initially reluctant to take a U.S. $100 bill, but acquiesced after reassurances that it was not counterfeit.

Outside, as the mid-day call to prayer sounded over the busy marketplace, other squad members were making radio contact with Marines at their base, dubbed Battle Position Hue City, and summoning a Humvee to come out and pick up their bulky purchase.

Although there have been no attacks on U.S. forces since the sweep through the city, the Marines took precaution and arranged to meet their vehicle on a nearby side street.

&#8220;All we gotta do is go back &#8230; and link up,&#8221; Virts said, holding out one of the ubiquitous satellite-image maps of the city that Marines here use for navigation and planning.

Gattis squeezed the radio receiver in his left sleeve pocket and told his team members it was time to leave.

As two Marines began lugging the large brown cardboard television box down the street, other Marines and a unit of Iraqi Army soldiers who joined them on the joint patrol secured the street, stopping traffic and kneeling, with rifles ready, at each cross street.

The otherwise uneventful shopping trip underscored the recent transformation of the border city that was off limits to Marines for nearly a year as insurgents operated openly and used it as a staging area to move guns and weapons from Syria into Iraq.

The television will add dramatically to the Marines&#8217; quality of life here. Since their arrival two weeks ago, they&#8217;ve had no running water, only one hot meal a day and no telephone or Internet service. A mail truck arrived for the first time last week.

Receiving American televisions stations in this far-flung outpost may be difficult, but the Marines expect at the least to receive AFN, which offers a mix of domestic sports and news shows.

Several Marines spent much of the afternoon struggling to decipher the Arabic language instructions that came with the satellite dish.

And Thursday afternoon, a convoy brought turkey cutlets and T-bone steaks to help the Marines celebrate the Thanksgiving holiday.

In truth, though, holidays mean little for many deployed Marines. Some began their day unaware it was the final Thursday of November.

&#8220;Happy Thanksgiving,&#8221; Cpl. Joseph Walker said, with a trace of sarcasm, to several others in his squad shortly after reveille Thursday morning.

Walker shrugged at their reaction.