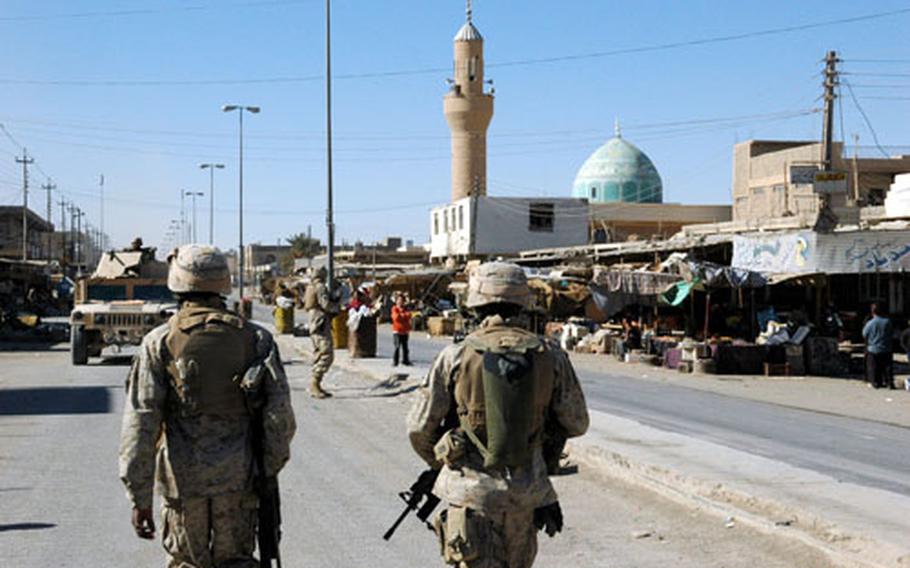 U.S. Marines patrol the city of Husaybah for the first time in more than a year. (Andrew Tilghman / S&S)

U.S. Marines patrol the city of Husaybah for the first time in more than a year. (Andrew Tilghman / S&S) 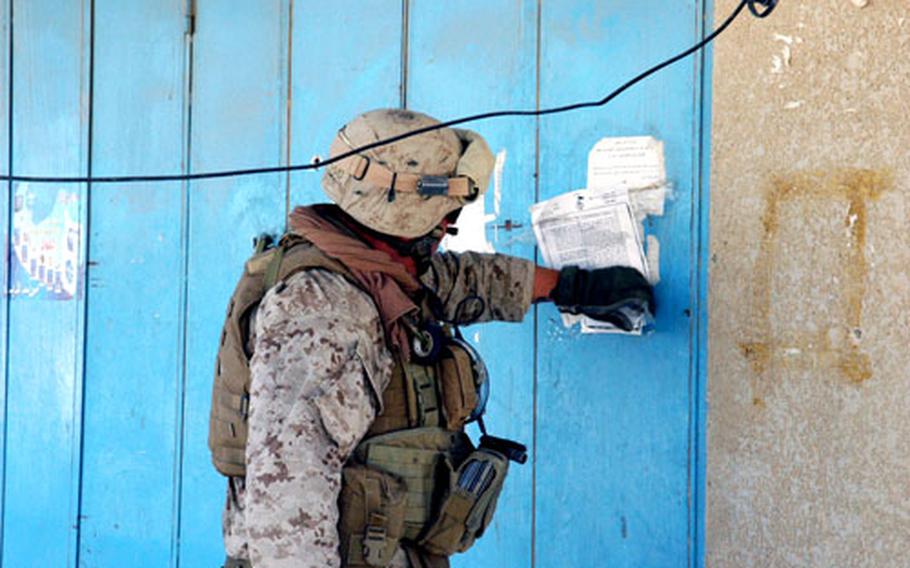 Sgt. Scott Wood tears off a freshly posted tract in Husaybah from al-Qaida in Iraq just days after U.S. Marines swept through the city to clear out insurgents. (Andrew Tilghman / S&S)

HUSAYBAH, Iraq &#8212; Driving through the marketplace, Sgt. Scott Wood saw many signs of daily life returning to the city center: children playing in the streets, men squatting near shops &#8212; and al-Qaida in Iraq propaganda hanging on a wall.

Although Marines conducted a house-by-house search of the entire area last week, they have begun to find several signs that insurgents may already be slowly returning to Husaybah. In addition to the propaganda, Marines found several unexploded roadside bombs they believe were freshly set since troops came through last week.

This border city on the far western edge of Iraq&#8217;s Euphrates River Valley has reached a turning point &#8212; a window of time when military combat begins to resemble police work, when direct assaults give way to routine patrols, and when killing insurgents seems easy when compared to simply finding them.

&#8220;Now comes the hard part,&#8221; said Capt. Clinton Culp, from Amarillo, Texas. &#8220;Now we have to make sure these people have a safe and peaceful environment to come back to, so they can get on with their lives.

Dubbed Operation Steel Curtain, last week&#8217;s assault was the largest of its kind since the battle of Fallujah, and it rolled through the last city in western Iraq where U.S. forces had no daily presence.

Now, the Marines are walking the streets of this former insurgent stronghold for the first time in more than a year. Troops were busy this weekend fortifying two new bases inside the city of Husaybah, erecting sand-filled barriers around the bases and readying a long-term place for Marines to live while conducting daily patrols and civil assistance programs.

The Marines also have attached units of Iraqi army soldiers who joined in last week&#8217;s battle and will remain here as part of the long-term presence. While the Iraqi unit has extensive combat experience, it remains dependent on the Marines for food, medical care and other logistical support.

As Marines began patrolling the city, dozens of buildings lay in rubble after a series of aerial bombings during last week&#8217;s fighting.

While many houses appear to remain vacant, many residents have returned. Several people cautiously approached the Marines on foot patrol to voice complaints about the state of their city.

Second Lt. Paul Haagenson, 24, assured the man that the Marines were making every effort to address the water and electricity, and he urged the man to help U.S. troops fight the insurgency.

As resistance during last week&#8217;s seven-day operation faded in its final days, many Marines began to speculate about what happened to the city&#8217;s once-entrenched insurgency. Some said they were killed in battle. Others said they fled to nearby towns or across the border to Syria.

Wood was not so optimistic.

&#8220;I know exactly where they are,&#8221; Wood said, as he walked down a residential side street with his rifle muzzle pointed downward.

Wood and others had little success trying to find out who left the propaganda poster on the downtown wall.

The merchant from the adjacent store said he had no idea where it came from. But Gunnery Sgt. Derrick Link told the man, through a translator, that he needed to step up and help fight the insurgency in his own way.